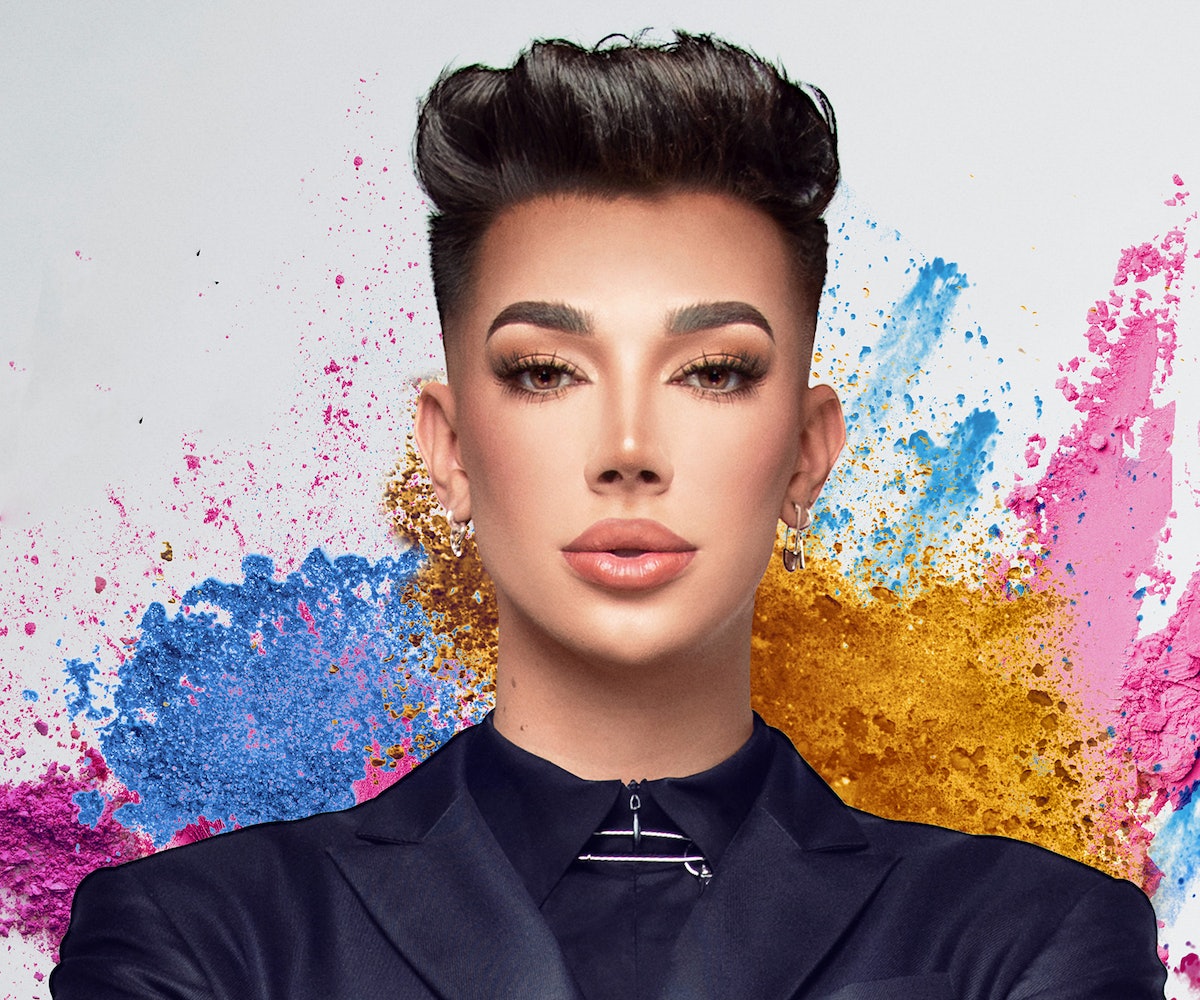 "Welcome to the set, girl," James Charles says as I enter one of the many dressing rooms inside YouTube Space Los Angeles in late January. It's the first day of filming Instant Influencer With James Charles, and you can feel the excitement from Charles and the entire crew. The 20-year-old creator is exactly how you'd expect him to be: friendly and bubbly, a fast talker, and extremely passionate about his next project.

In possibly his biggest gig to date, he's hosting, directing, and executive producing the Project Runway-style competition show to find the next big beauty influencer. The series will be free to stream on Charles' YouTube account, so his more than 17 million subscribers can check it out easily — and learn a thing or two about what it takes to be an influencer at the same time.

Instant Influencer is being produced by Brian Graden Media, which is also behind the YouTube Originals series Escape the Night hosted by Joey Graceffa. While poking around the massive space, all I can think of is money. That may sound tacky, but the production value of this show is not a joke. The set is as large and as decked-out as you would expect from a typical TV set or streaming service production, not necessarily a beauty influencer's YouTube channel — even one as big as Charles.

"I have a major love for production," he tells NYLON. "I love making big, over-the-top content. That has been my biggest goal, to go on platforms to make the best quality videos possible, and doing something that was bigger than my normal productions in my studio has been the biggest dream of mine." Since he started his channel in 2015, he says he's been dreaming about a project like this one.

With this four-part series, Charles is looking to take everything he's learned since his early days as a beauty influencer — both good and bad — to discover and mentor the next big star. "I love my job more than anything in the entire world, and I've made a lot of mistakes," he admits. "And because of that, I've learned a lot, and I've had a lot of success as well. It's really exciting for me to be able to pass on that knowledge, and kind of hand over the torch to somebody that I think really deserves it, and hopefully give them a little bit of a platform boost."

Back in November, Charles posted a YouTube video to his channel titled, "I'm Filming My Own Reality Competition Show...& I Want YOU To Be In It!" which currently has more than 1.5 million views. There, he announced his casting process to choose six micro-influencers to compete for a prize package that includes $50,000 and a video with Charles on his channel. While we chat today, they're filming the first of four big challenges, which, yes, include one dramatic elimination each. But that doesn't mean Charles is rudely squashing any dreams here. He hopes this series shows the positive side of an industry he loves.

"There are so many people with amazing talent in the community and there [are] so many people with amazing personalities, but we're really looking for the person that has it all, and has the potential to be a superstar," he explains. "I think it's going to be a really positive thing for the community, because of course this is a competition show and people will be going home. But at the end of the day, this is really an outlet for them to get inspired, and also get a lot of knowledge."

This insight won't just come from Charles. He enlisted some famous friends to act as both mentors and judges to the contestants depending on the theme of the week, because it takes more than knowing how to apply makeup to be a beauty influencer. One of the guest judges is OG influencer Paris Hilton, who can undoubtedly shed plenty of light on how to produce photoshoots and videos, as well as how to market yourself and communicate your message to the world.

"I just love everything about him," Hilton tells NYLON of meeting Charles and coming on as a judge. "I remember when I first saw a story on him, that he was the first [male spokesperson] for CoverGirl. Then we met in real life and instantly just had this connection. We were talking about what kind of fun collabs we can do together and we have some really fun concepts that we're going to do. And then they called me about doing the show and I thought it was a great idea."

One thing Hilton made sure to talk to her new friend about before coming onboard was that she was going to have a very difficult time "hurting people's feelings." Luckily, Charles assured her that it'll be an all-around positive show. "I think it's about just being inspirational and giving good advice, but I never want to hurt anyone's feelings cause that's just the type of person I am," she says. "I would never say anything negative about someone, but I will give them good advice to help them so that they can get it right."

YouTube brought the two together, as Hilton is also working with the company on an upcoming documentary called This Is Paris. Set to premiere in May, Hilton promises you'll get to see her real side — not the "character" she played on The Simple Life. "I kind of stuck with that character for so long. And now I've grown up and I'm in a different phase of my life. I feel that the media and the public have come up with their own narrative of me and I've never really said what the truth was," she says.

Hilton will join fellow superstar judges to mentor, guide — and eventually, eliminate — contestants, not unlike some of Charles' favorite reality shows. He drew inspiration from RuPaul's Drag Race, America's Next Top Model, and Project Runway and the way each show sets out to crown a winner that embodies the whole package.

"Of course there have been makeup shows done in the past, but this show's really focused on being an influencer," says Charles. "It's not just about the artistry. Of course, that is very, very important, but there are so many facets that go into being an influencer. Whether it be the artistry, the marketability, speaking skills, communication, being able to sell yourself obviously, which is what we're testing in today's challenge."

Charles' close friend, Claudia Soare, better known as Norvina, is also judge on the show alongside Charles. Norvina is an influencer herself, as well as the president of Anastasia Beverly Hills and the daughter of the brand's founder, Anastasia Soare. "I think that it's such a good opportunity for people to showcase artistry and also taking it outside of artistry and showing their ability to do and be more than just, 'Oh, I do good makeup,'" she tells NYLON. "It elevates the platform of what Instagram, YouTube has done for so many of these kids."

At the end of the four episodes, Charles will crown who he deems the next big star who will (hopefully) go on to do big things. He thinks the beauty industry needs a little fresh blood. "There's always room for new people to keep everybody inspired to keep people challenged," he says. "I always love when new artists come up that like, pushed me to work harder and pushed me to elevate my content and pushed me to create new makeup. That's how industries thrive. We've been at a time in the beauty space for a little bit where there hasn't been too much of that, to be honest. Everyone kind of feels it."

Charles hopes that people at home might have a little more respect for what influencers do, or at least understand all that goes into it. After all, shows such as Project Runway and America's Next Top Model did just that for fashion designers and models. "From an outside perspective, a lot of industries look really easy," he adds. "But the reality is that they never are."

By now all episodes have finished filming, but when we spoke in January, Charles expressed his hope that contestants — as well as viewers at home — learn from the show and set out to create their own creative projects. "I really hope that these contestants will take in everything that we all have to say to heart, and be able to, hopefully, not take it personally and use it to their advantage. That's definitely the type of attitude that I want to see moving forward because that's someone who is a superstar."

Charles notes that he's received his fair share of criticism, especially when first starting out, but that he's been able to learn from each constructive one. "It's really hard to take that at first," he admits. "But over the past few years I've learned to really take that in, and not take it to heart, and be able to really frame that, and use problems, or mistakes, or scandals, or feedback to my advantage and [allow] it to further my career and make myself a better influencer. I'm really hoping that the winner will be able to do that as well."

People aren't going to always love you or love what you create, and that's something Charles knows about firsthand. "It's tough and it sucks," he says. "Oh, it sucks so much. But you have to move on, and move on to the next, and hopefully not suck next time."

The first episode of Instant Influencer With James Charles comes to YouTube on April 24.