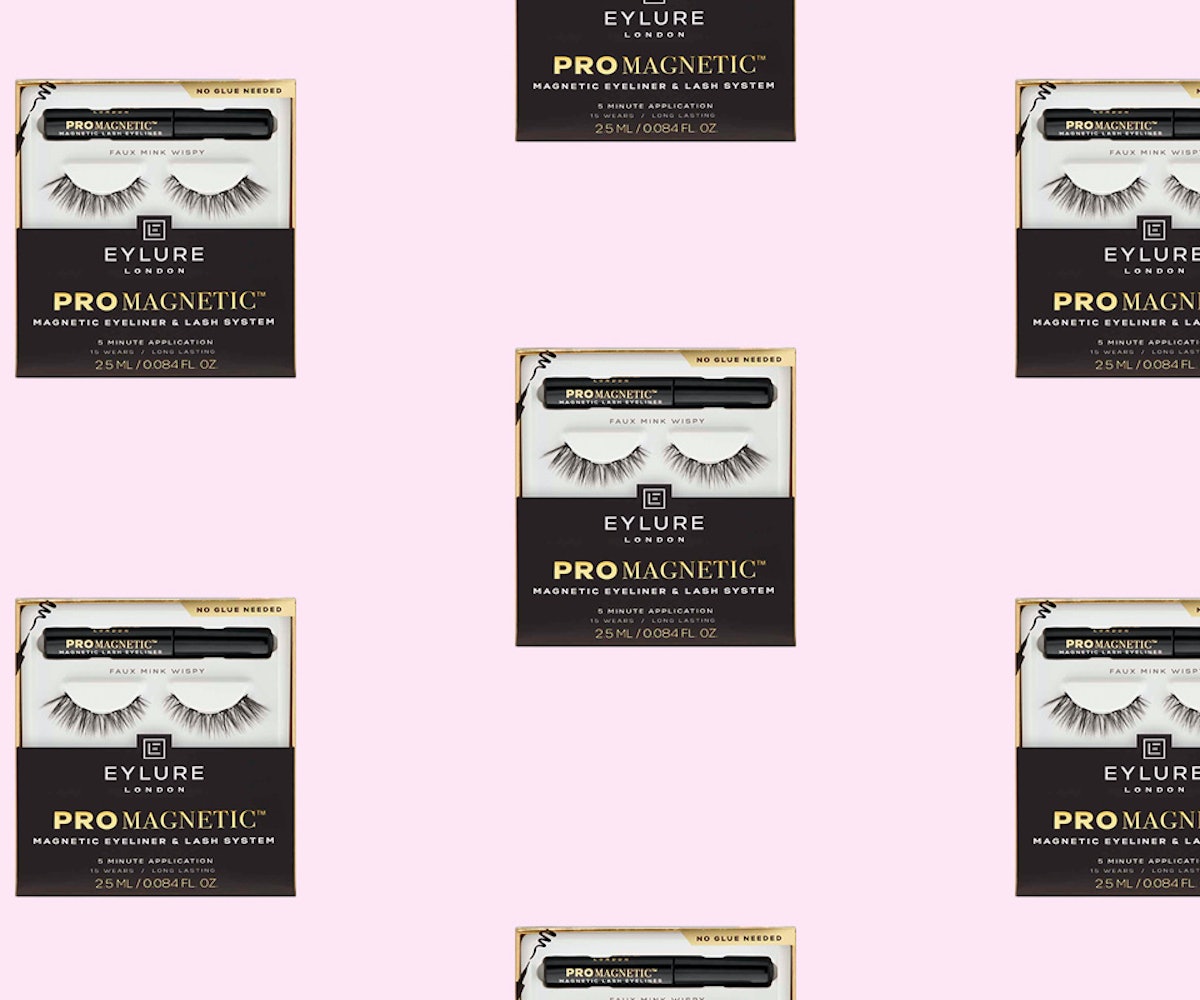 Magnetic lashes are, in a word, complicated. The idea for them is great! Inspirational, even. Basically, thanks to magnets (which makes them feel vaguely scientific), you can abandon your lash glue in favor of something easier to use, mess-free, and instantly amazing. But the problem is that all of these promises are actually kind of a lie. Magnetic lashes tend to be difficult as hell to apply, often peel off, and aren't easy to customize like their glue-requiring predecessors. Most iterations require sandwiching your lashes between an upper and lower magnet, and force the user to have a high enough level of dexterity with which they can line up the lashes and press it all together without losing their mind and throwing them away entirely.

Well, Eylure wants to fix that. The brand's new lashes get rid of the layered lash issue entirely, and employ magnetized eyeliner instead (which feels even more scientific). The key to making this work is applying a few coats of liner and allowing it to dry before popping the lash on, which (through science) then instantly adhere it to your eye. Sounds great. But does it actually work?

Four NYLON staffers took them for a spin to find out.

I have never been able to master the art of the false eyelash, so I was nervous to try these. First off, to apply these lashes, you not only have to have exact lash placement, but you also need to be a cat-eye queen (something I am not). These required no less than three layers of eyeliner to create a magnetic hold. The eyeliner brush applicator creates a pretty thick line, and the liner has an extremely liquid-y consistency, which made it difficult for me to make a precise line. Then, once all your liner layers are dry and you place your lash, there is no moving them. The lash removed part of the eyeliner when I tried to reposition it, and I had to start the eyeliner application process all over again. In the end, I got both of them to stay in place. I think because these weren't a full band, I had an easier time applying them. Ultimately, because every other attempt I've made to use traditional lashes has been a failure and these managed to stay the whole night, I will call this a success.

I was excited to try these out as I've heard about the magic powers of magnetic eyelashes, but, unfortunately, I wound up disappointed. Despite following the instructions very carefully—and waiting in between eyeliner applications to let the product dry—the lashes only somewhat stuck close enough to my lash line and seemed only partially magnetized along the strip. I liked the way the liner looked and decided to go out with it without the eyelashes, as I wasn't secure that they would stay on in with even a whisper of a breeze. While the eyeliner did stay on all night, it also took a lot of effort to take off—even while using makeup remover.

I really wanted these to work for me. I've never been a fake-eyelashes kind of person, but I have *always* been a black eyeliner kind of person, so I was excited about the promise that, with three coats of liner, these falsies would attach to my lids without my having to worry about clumpy glue. Unfortunately, it didn't work out as well as I'd wanted.

With my three coats of eyeliner on, I held my breath while trying to secure the lashes, and quickly realized that I would have to stay this dramatically still if I wanted these lashes to stay in place for any length of time. It felt like these lashes were sitting on my lids with nothing holding them there but my willpower, and that if I were to so much as sneeze, they would fly off into another room. They may look fine in the pic, but I promise you that I was saying a silent prayer that they wouldn't come off with each blink while I tried to get The Shot.

Final verdict? If you just want fake lashes to stay on for the length of a small photo shoot, give these a go, but I would not recommend them for daily wear, and especially not for any movement-heavy days.

I tried the Faux Mink Volume lashes and found that they were much easier to apply than regular lash strips. It took a little longer, but it really helped that the magnetized eyeliner automatically pulled the lashes into place. But—they did not last long. They never felt secure, and I had mine on for an hour tops before I just gave up and took them off. It felt like the magnets weren't strong enough for this to work, so it's back to glue for me.