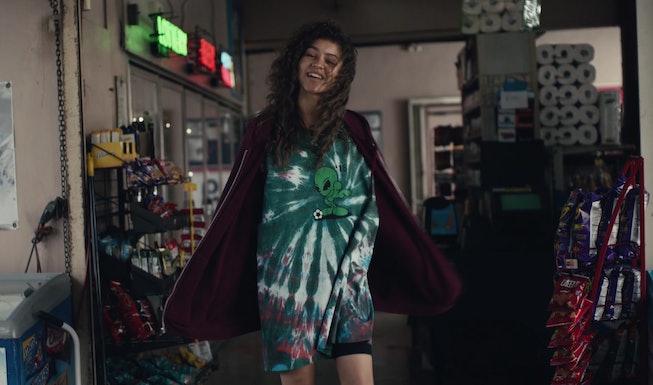 If you've always wanted to own the same exact oversized hoodie that Rue (played by Zendaya) is often seen wearing in Euphoria, now is your chance. Production company A24 is hosting a slew of auctions for charity, offering chances to bid for (and win) props and costumes from such indie hits as Uncut Gems, Midsommar, Mid90s, Eighth Grade, The Lighthouse, and more.

A24 Auctions kicks off at exactly noon ET with its first "A24 Attic Auction," featuring Rue's hand-me-down hoodie — specifically, the one Zendaya wore for the "All For Us" dance sequence in the Season 1 finale, so there are holes in the armpits to fit a safety harness. Stevie's first-ever "'80s as f*ck" skateboard from Mid90s, Kayla's "Coolest Girl In The World" time capsule and Gabe's orange snorkel mask from Eighth Grade, and heirloom doormats from the horror film Hereditary are also available for bidding until Friday, May 8. All of the auction's proceeds will help benefit NYC Health + Hospitals, which will directly support the frontline workers of COVID-19.

More from A24 Auctions will be going live throughout April and May, including collectibles from Midsommar for the FDNY Foundation, which will have the May Queen dress worn by Florence Pugh during the film's ritual sacrifice scene. According to A24, it took costume designer Andrea Flesch nearly two months — and four different prototypes — to create the final 33-pound garment, made up of a hoop skirt and about 10,000 (!) hand-glued silk flowers. But if florals aren't your thing, then how about a bear headdress or the Ättestupa ritual's finishing mallet instead?

Uncut Gems is also having its very own auction to help the Queens Community House. Special items from the movie will include Kevin Garnett's Celtics jersey, Howie (Adam Sandler)'s KMH Gems & Jewelry merch, the bat mitzvah dress that Dinah (played by Idina Menzel) wore to Passover dinner, and, of course, a bedazzled Furby.

See more pieces available from A24 Auctions, below, and visit a24auctions.com to start placing your bids for Rue's Euphoria hoodie now.