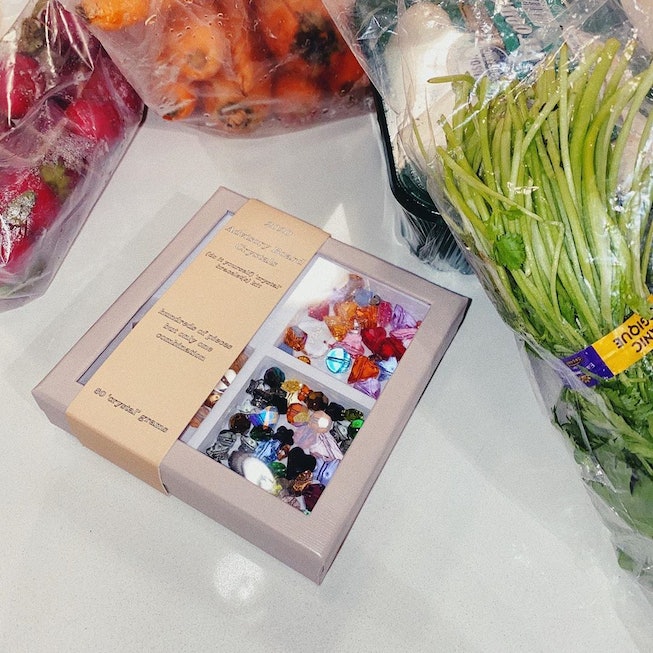 'Tis the year of crafting friendship bracelets at home, and it just got a lot chicer. Streetwear brand Advisory Board Crystals has partnered with Swarovski on a DIY jewelry kit made from upcycled crystals that were unused and unsold, imperfect, or retired. Every kit comes with its own unique combination of crystal beads, along with two heart pendants branded with the logo "Abc.," so you can rest assured that you'll create a true original.

Advisory Board Crystals was founded in 2016 by Heather Haber and Remington Guest, a Los Angeles-based couple who met in an Uber Pool and previously worked at Band of Outsiders. While the brand creates streetwear, it's also known for its selection of healing crystals.

"With crystals, what we're interested about them is that there is a really scientific aspect to them. Obviously, like with any object, they're made up of elements from the periodic table. Conversely, there's the 'pseudoscientific' aspect where it's the idea that certain properties give off specific energies," Harber told HBX in 2018. "This part isn’t really scientific, but the idea stems from science. We like to play with 'pseudoscienc' in this way — the blurred distinction between what’s real and what isn’t. We don’t use irony in what might be the usual way these days. It’s not so much the typical tongue-in-cheek type of thing that some people think. We use it in a way where the irony isn’t so apparent right away. I think it just comes naturally — things that are interesting to us often have that. If it doesn’t it always just seems flat and uninteresting."

The new Advisory Board Crystals x Swarovski DIY kit is on sale for $75, and will drop exclusively on the brand's website on Wednesday at 10 am PT.