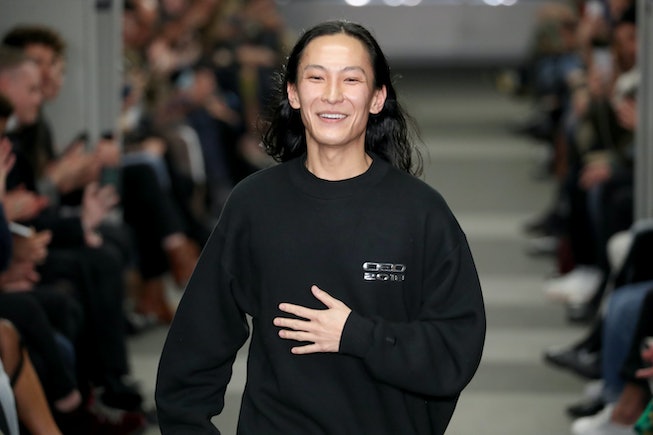 Editor's Note: This article has been updated to reflect Wang and Bloom’s statements and additional reporting from The New York Times, BBC, and New York Magazine.

The Alexander Wang saga may be coming to a close. On Monday night, March 9, Wang posted a statement to his personal Instagram account acknowledging the claims against him and vowing to “set a better example” in the future.

“A number of individuals have come forward recently to raise claims against me regarding my past personal behavior,” the statement said. “I support their right to come forward, and I’ve listened carefully to what they had to say. It was not easy for them to share their stories, and I regret acting in a way that caused them pain. While we disagree on some of the details of these personal interactions, I will set a better example and use my visibility and influencer to encourage others to recognize harmful behaviors. Life is about learning and growth, and now that I know better, I will do better.”

Lisa Bloom, who had been representing Wang’s accusers, wrote on Twitter that the two parties had come to an agreement on moving forward.

“We have met with Alexander Wang and his team. My clients had the opportunity to speak their truth to him and expressed their pain and hurt,” Bloom wrote in a tweet. “We acknowledge Mr. Wang’s apology and we are moving forward. We have no further comment on this matter.”

At the beginning of 2021, Alexander Wang faced a wave of sexual assault allegations, which he has denied, after one man's claim of being groped by a fashion designer went viral on TikTok.

On Feb. 28, New York Magazine released an extensive report with new allegations against Wang. The story includes details from seven accusers, whose claims range from Wang groping their genitals at a club to having sex with someone after they blacked out.

Earlier on Feb. 24, BBC published a new allegation from 21-year-old Parsons student Keaton Bullen, who claims Wang unzipped his pants and groped him at a New York club in 2019.

"All of a sudden he unzipped my trousers, put his hands in my pants and started grabbing my penis in front of a bunch of people. I completely froze," Bullen said. "He then said: 'I want to take you home with me.' I felt weirded out...and removed myself from the situation as fast as possible."

On Feb. 18, The New York Times previously published an allegation from David Casavant, a stylist and fashion archivist in New York City, who claimed that Wang pulled his pants and underwear down in a Brooklyn club in January 2017.

Casavant is one of many clients taken on by high-profile attorney Lisa Bloom, but he is currently the only one to shed his anonymity.

"I get it, [the allegations] were mainly anonymous, so that’s fine," he told The New York Times. "But here I am. I’m sitting in front of you. I’m saying who I am. I’m not anonymous anymore."

Model Owen Mooney initially shared his claim on the social media platform of "a really famous fashion designer" allegedly grabbing his crotch at a 2017 party without naming Wang, only revealing his identity after a commenter did so.

"I thought in the previous video the better thing to do was just to not mention any names, but this comment surprised me because they actually got it right," Mooney claimed in a follow-up video. In the same follow-up video, Mooney went on to refer to Wang as a "massive sexual predator" and and further alleged that multiple people had similar experiences with the designer.

After Mooney's videos went viral on Sunday, Dec. 27, Shit Model Management posted over a dozen anonymous allegations against Wang that it had received in its Instagram DMs, which included claims ranging from Wang spanking someone at a club to drugging and assaulting men. Fashion's watchdog Instagram account, Diet Prada, has also released a post detailing the allegations against the designer to its 2.1 million followers.

Wang, who was on vacation celebrating his birthday, turned off comments on his most recent Instagram post while news broke online. On Monday, Jan. 4, the designer issued a statement on Instagram denying the accusations:

"I'd like to take the opportunity to connect directly with the people who have followed and supported the brand and me over the years and address the recent false, fabricated and mostly anonymous accusations against me.

"These baseless allegations were started on social media by sites which repeatedly disregarded the value and importance of evidence or fact checking.

"My team is doing everything in its power to investigate these claims and I promise to remain honest and transparent throughout that process. I am fortunate to have received an overwhelming amount of support over the last few days and am thankful to those standing by my side at this time."

Previously, on Thursday, Dec. 31, he issued a statement to The New York Times:

"Over the last few days, I have been on the receiving end of baseless and grotesquely false accusations. These claims have been wrongfully amplified by social media accounts infamous for posting defamatory material from undisclosed and/or anonymous sources with zero evidence or any fact-checking whatsoever."

The surge in allegations also resulted in resurfaced posts that rapper Azealia Banks made to her Instagram Stories in 2018, which include DMs from unnamed sources accusing Wang of having Wang has a history of assaulting trans women.

The screengrabs of Banks’ Instagram Stories, as made available on Shit Model Management’s Twitter account, include text overlapping the anonymous DMs. "What is the tea?" Banks, who once modeled for the brand's campaign in 2012, wrote tagging the designer. "You out here raping girls?"

Alexander Wang's reputation as fashion's party boy has never been viewed as nefarious outside of select fashion circles, likely in part due to his close relationships with high-profile models and celebrities including Lady Gaga, Kim Kardashian West, Hailey Bieber, Bella Hadid, Kylie Jenner, Dua Lipa, Rihanna, Zoë Kravitz, and more. His #WangFest parties have become one of the most coveted invites during New York Fashion Week, solidifying his reputation as a powerhouse both in and outside of the fashion industry.

According to People, famous lawyer Lisa Bloom will be representing Wang's accusers for potential legal action. "The fashion industry is long overdue for a reckoning of its frequent, disturbing mistreatment of models. I’ve represented many alleging sexual misconduct in recent years," said Bloom, who previously represented the women whose sexual harassment claims led to the firing of Bill O'Reilly from Fox News in 2017, in a statement provided to People. "Models are not props, and they have the same rights to workplace respect as everyone else. I thank everyone who has reached out in support, and I'm happy to speak for free and confidentially to any others, including witnesses."

We will update this story as we learn more.

If you or someone you know has been sexually assaulted, you can call the National Sexual Assault Telephone Hotline at 800-656-HOPE (4673) or visit online.rainn.org.

This article was originally published on Jan. 5, 2021