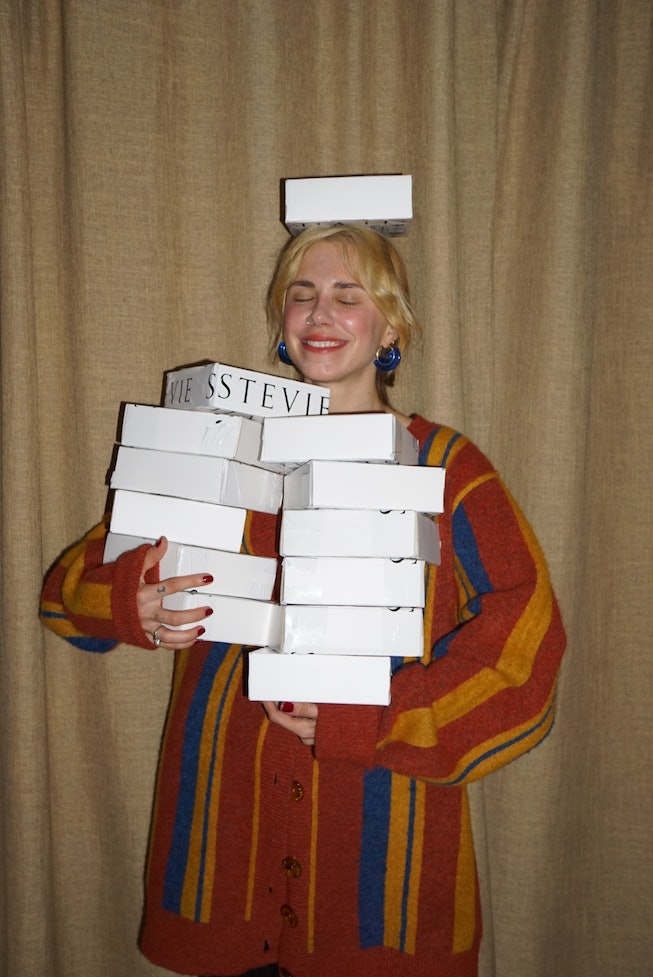 During fashion month in February, Courtney Trop, better known as Always Judging, toted around white bottles of CBD tinctures to pass off to her influencer and industry friends. Most of them were struggling with jet lag, anxiety, or poor sleeping schedules, recalls Trop, and she wanted to offer her hemp-based concoctions as a solution. "Every time I was around someone who was really stressed, I'll pull Stevie out," she tells NYLON over the phone from her home in Los Angeles.

Stevie is named after Trop's love for the Fleetwood Mac frontwoman and is her first foray into the cannabis industry. While most of her peers are pivoting their influencer careers into full-fledged fashion brands, that was never the goal for Always Judging, which Trop launched as a fashion blog in early 2013. Over the past seven years, her career has evolved from outfit posts and style tips to sitting front row at fashion shows and partnering with a slew of luxury and cult-favorite indie labels.

"Everyone kept asking me, 'Are you going to start your own brand?' I enjoy going to the shows and working with brands, but I just never saw myself as a designer," explains Trop. "I like to appreciate it from afar, so I didn't want to have my own fashion brand. I wanted to do something that felt more natural to me, and that was CBD and cannabis."

Growing up in Pittsburgh, Trop learned about weed at a very young age; her father was open about smoking it nearly every day. She admits never having a connection with alcohol in high school, a time when teens were most likely stealing sips of beer or liquor from their parents' basement stash. It wasn't until she was around 16 or 17 that she first smoked cannabis. "One day my dad found my pipe in my car with weed in it," says Trop. "He gave it back to me and said, 'Don't tell your mom. She'll kill you.'"

Launching Stevie was a two-year process. Trop applied her years of experience taking CBD (mainly to help with bad cramps) to come up with the best formula for a tincture. "[My business partner and I] tried so many different ones," she says. "It's literally trial and error. You can compare it to drinking wine to find your favorite one." Eventually, they settled on Stevie's debut product: an organic CBD tincture oil ($60 for a 500-milligram bottle) that's third-party lab-tested. It includes organic MCT oil from actual coconuts, which, when paired with CBD oil, helps the tincture get absorbed into the bloodstream. It's also full spectrum, which Trop describes (in the most LA way possible) as "juicing the hemp plant and then you put everything back in," so there's less than 0.3% of THC, the psychoactive ingredient of cannabis, in it.

Trop is already planning to release more Stevie products, which she crowdsourced from her 342K-strong following — a business tactic that many influencers turn to — and takes inspiration from direct-to-consumer brands with a loyal community, like Glossier. Soon Trop will launch CBD gummies (vegan, as requested by her followers) and a CBD body salve; lollipops and pre-rolls are also on her wish list. To celebrate 4/20, all Stevie orders made on that day will come with salve samples and a tote bag emblazoned with the brand's goddess, designed by tattoo artist Dezső Marianna, who Trop had met in Budapest.

A full-on cannabis brand is the long-term goal for Stevie, as well as Trop's very own dispensary. "I want it to be really beautiful and inviting, and as the laws change in other states and other countries, hopefully I can open it in other places," she says. "But that's down the line." As the cannabis industry continues to take more cues from the fashion world — with weed being marketed beyond wellness and more as a luxury good — it seems like the arrival of Stevie is perfect timing.

For now, however, Trop is working on using CBD as an entryway into cannabis, keeping education as her top priority among consumers. "The most important thing is educating people, which I've been focusing on with my Instagram account," explains Trop, using the Q&A feature on Instagram stories to field queries from her followers about her brand, CBD, and cannabis. Stevie's tagline "up to something" is also her way of switching the negative connotation with weed — "that people are stoned on their couches not doing anything," says Trop. "People use cannabis or CBD while they're traveling, to help fall asleep, to deal with chronic pain. They're high doing things; they're living their life."

It's been a little more than a month since Trop officially launched Stevie in March, around the same time that stay-at-home orders were enforced across the country, nonessential businesses were closing their doors, and about a week before the novel coronavirus was declared a global pandemic. The world at large feels like it's on pause, and that applies to the fashion industry, too. Runway shows and major events have been canceled, production for fall 2020 collections from fashion month is nonexistent, apparel and accessories sales have dramatically declined, and indie brands and retailers are struggling to stay afloat. The same goes for influencers, as paid partnerships lined up for spring have been postponed or canceled.

"I haven't gotten a job with Always Judging in probably six weeks," admits Trop. "Stevie has been keeping me busy, though. I feel really grateful for anybody who's talking about it and for the sales that I have. My fashion career kind of came to a halt, and Stevie just saved my life."

Readers should note that laws governing cannabis, hemp, and CBD are evolving, as is information about the efficacy and safety of those substances. As such, the information contained in this post should not be construed as legal or medical advice. Always consult your physician prior to trying any substance or supplement.