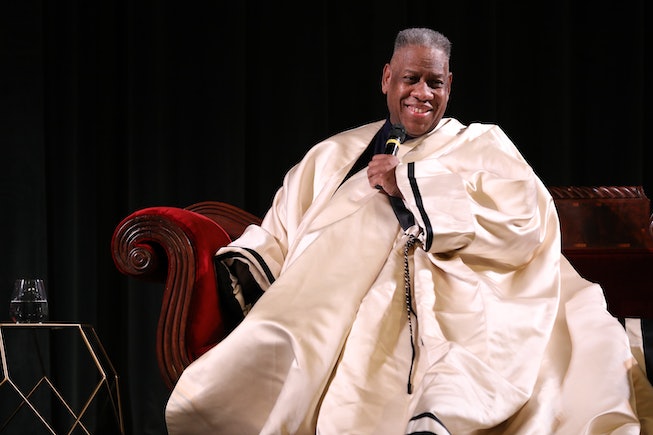 On Tuesday, Jan. 19, André Leon Talley died at the age of 73, which was confirmed in a recent Instagram post. The former Vogue editor reportedly passed away from a heart attack in a hospital in White Plains, N.Y., where he resided for nearly two decades.

The news of Talley’s death shocked much of the fashion industry. “Good bye darling André,” wrote designer Diane von Furstenberg, a longtime friend of Talley, via Instagram. “No one saw the world in a more glamorous way than you did. No one was grander and more soulful than you were. The world will be less joyful.”

“You championed me and you have been my friend since my beginning,” wrote Marc Jacobs. “Our chats, the moments we shared….oh my friend. You and your passions were larger than life. I love you and I will miss you, dear André.”

Talley was undeniably an influential force in the fashion industry. Raised by his grandmother in Durham, N.C., during the Jim Crow era, he credited much of his early understanding of luxury and fashion through her, as well as by his readings of the glossy pages of Vogue in his youth. After graduating with a degree in French literature at Brown University, Talley moved to New York City to work as an apprentice for Vogue’s former editor-in-chief Diana Vreeland at the Met’s Costume Institute in 1974, where, little did he know, he was just beginning to make history.

Talley later landed a role at Andy Warhol’s Factory and soon transitioned into journalism by working for Interview Magazine. He would then go on to work for a number of publications, including Women’s Wear Daily, W Magazine, Ebony, and Vanity Fair. Throughout his career, he was well acquainted with many fashion icons in the industry, from Karl Lagerfeld and Yves Saint Laurent to Manolo Blahnik, John Galliano, and more.

Eventually, starting in 1983, Talley rose to prominence during his time at Vogue as the first Black man to ever serve as creative director. He worked closely alongside editor-in-chief Anna Wintour from 1983 to 1995 and was considered to be one of her closest friends. After a brief departure, he returned to the magazine as editor-at-large and was featured in Vogue’s 2009 documentary, The September Issue, until he officially left in 2013.

Despite working in a notoriously tough industry, Talley shined with his enthusiasm, infectious sense of humor, as well as advocating for diversity in the industry. His eccentric yet chic sense of style, along with his encyclopedic knowledge of fashion, also became his trademark. In his later years, Talley would serve as a judge on Tyra Banks’ America’s Next Top Model and style First Lady Michelle Obama. In 2014, he was named artistic director of Zappos Couture, and he has served on the Board of Trustees of Savannah College of Art and Design since 2000.

Talley was also very outspoken about the flaws in the fashion industry, often detailing the brutal conditions and racism he faced throughout his career. He documented his experiences in a series of books, most recently in his 2020 memoir, The Chiffon Trenches, and the 2018 documentary, The Gospel According to André. “People say, ‘How do you do it? How do you put up with this world for so long?’” Talley said in the film. “I say through my faith and my ancestors, you know?”

Tributes for André Leon Talley have since flooded social media following the news of his passing on Tuesday night, including heartfelt messages from beloved fashion designers, celebrities, and more, below:

“The loss of André is felt by so many of us today: the designers he enthusiastically cheered on every season, and who loved him for it; the generations he inspired to work in the industry, seeing a figure who broke boundaries while never forgetting where he started from; those who knew fashion, and Vogue, simply because of him; and, not forgetting, the multitude of colleagues over the years who were consistently buoyed by every new discovery of André’s, which he would discuss loudly, and volubly—no one could make people more excited about the most seemingly insignificant fashion details than him. Even his stream of colorful faxes and emails were a highly anticipated event, something we all looked forward to. Yet it’s the loss of André as my colleague and friend that I think of now; it’s immeasurable. He was magnificent and erudite and wickedly funny—mercurial, too. Like many decades-long relationships, there were complicated moments, but all I want to remember today, all I care about, is the brilliant and compassionate man who was a generous and loving friend to me and to my family for many, many years, and who we will all miss so much.” — via Vogue

“During the shows, there was no place better than between André and Michael Roberts, with an assist from Isabella Blow, as they pulverized a collection. No one knew more about “the bows,” and of course much else, and I think that knowledge, coupled with his wit and amazing sense of game, should be André’s main legacy.” — via The Cut

“Talley knew that he couldn’t open the industry’s doors for everyone. But a welcoming space waited once folks were inside. Talley believed in fashion’s wonder. And he wanted all his children to see it.” — via The Washington Post