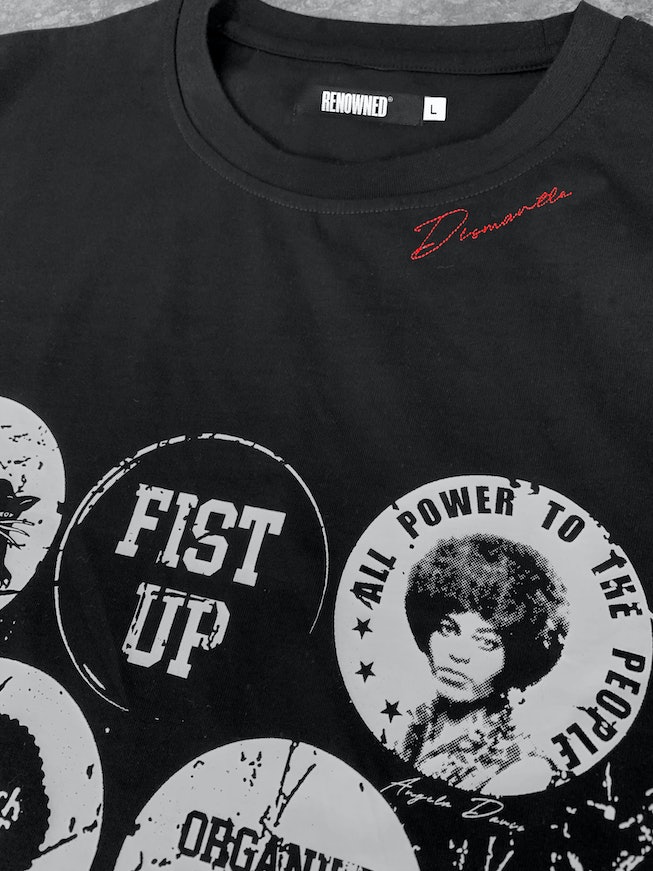 Angela Davis has her own fashion collab in the works. The iconic activist has partnered with Los Angeles-based streetwear brand Renowned on a collection of politically-themed loungewear. Inspired by the Black Panther Party and its cofounder Huey P. Newton, the capsule collection includes a T-shirt and hoodie with phrases like "Black Power," "We Not Asking No More," and "First Up" printed on them.

"I'm extremely humbled that she even agreed to do something like this. I don’t think she’s done anything like this before when it comes to fashion," Renowned founder John Dean told WWD. "I released my 'Heroes of Blackness' T-shirt this summer, and a friend of mine said he could send a tee to Ms. Davis. I said I don't know, because it's her friends on the T-shirt, but he sent it and she wore it and we set up a Zoom call to just talk."

The respect between Dean and Davis is mutual, with the activist saying, "John Dean's creations urge us to acknowledge the historical struggles that offer us visions of the future."

The new collection is available now, ranging from $35 for the T-shirt and $75 for the hoodie. A portion of the proceeds will be donated to organizations that work towards change within with the prison system, Underground Grit and Dream Defenders.

Shop the pieces, which are now available for pre-order until Friday, Dec. 18, below.