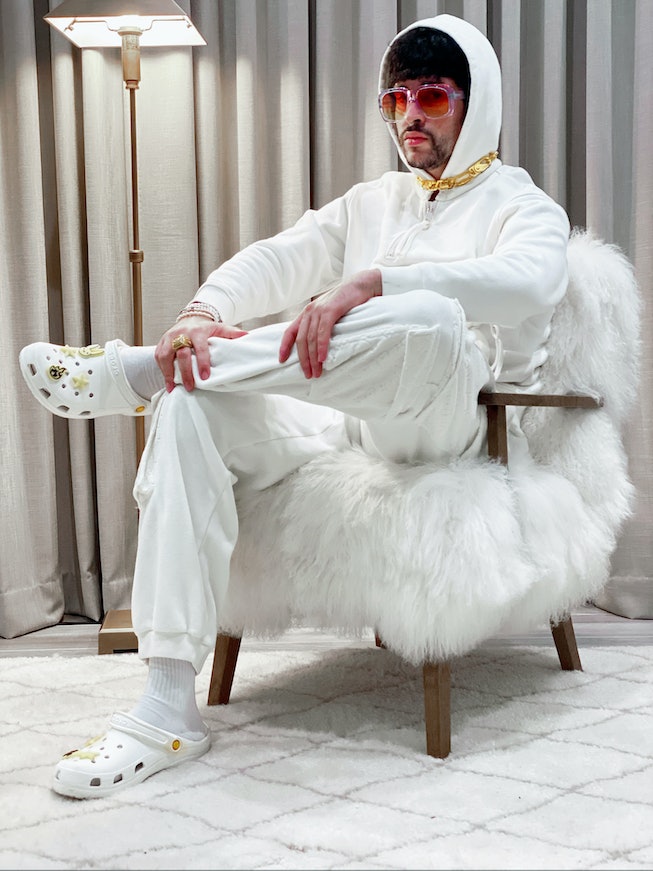 The ugly-but-cool footwear brand Crocs has announced a collaboration with Bad Bunny. The two have partnered on a pair of classic clogs that glow in the dark (just in time for spooky season), along with matching Bad Bunny-inspired Jibbitz™ charms. There are glowing stars that remind us of our childhood bedroom ceilings, the singer's signature bunny logo, a fire emoji, and more that pay homage to the singer's hit YHLQMDLG album.

Bad Bunny has been a Crocs enthusiast for some time now. He's been spotted during plenty of public appearances wearing the comfy footwear, like his guest spot on The Tonight Show with Jimmy Fallon from February 2020, a performance for The Late Late Show with James Corden the following month, and on stage at the 2019 MTV MIAW Awards in Mexico City. He also joins a growing list of Crocs collaborators from the music world, including Post Malone, country singer Luke Combs, and the Grateful Dead with Chinatown Market.

His "Glow Up" clogs will drop on Tuesday, Sept. 29, on Crocs.com at 12 p.m. ET, as well as across partner e-commerce channels in Latin America, FinishLine.com, and at select Finish Line retail stores.

See Bad Bunny's collaboration with Crocs in more detail, below.