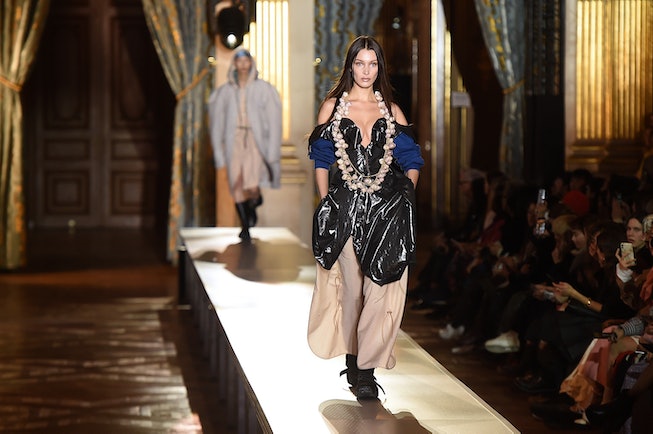 Bella Hadid spoke about the future of fashion for her Elle August 2020 cover, shot by sister Gigi on an iPhone at their family farm in Pennsylvania. While Hadid is now back in New York, she and her sister quarantined together, where they also paid close attention to the news and spoke out in support of Black Lives Matter.

"I have so much responsibility to use my platform for good, especially as I get older," she told Elle. "I want young girls and boys to know that it is okay to use your voice and demand justice for what is important to you. I want them to know it's okay to be empathetic and gentle, but to be strong and speak your truth at the same time."

That also goes for speaking out about the fashion industry, as well. Hadid also shared her thoughts about the systemic racism she's witnessed as a model and the hypocrisy of the industry as a whole.

"Going into the next season, my fear is having to see another one of my Black girlfriends get her hair burned by a hair straightener, or do her own makeup because the makeup artist hasn't been trained to work with all different skin types," she said. "I hate that some of my Black friends feel the way they do. Even if they're sitting front row, they’re not feeling accepted. Our industry is supposed to be about expression and individuality, but the reality is that [many people] still discriminate because of exactly [those differences]."

Hadid noted that she was looking forward to getting back to work after months of quarantine, though fashion week and campaign shoots will look much different than usual.

"I've had a lot of time to reflect during my quarantine, and I'm really eager to get back to work and make art again. Moving into the next season, I hope we can find a proactive way to move forward in a safe, healthy way. I think that our sets will be smaller and more intimate, which will be nice for a change," she admitted. "We'll also need to be aware of not using the same makeup brushes at shows, and implement many other health regulations to keep people safe. There is a lot to learn and a lot to do, but I feel with the right people, fashion can change everything."

Read the rest of Hadid's interview on Elle.com and check out her cover below.