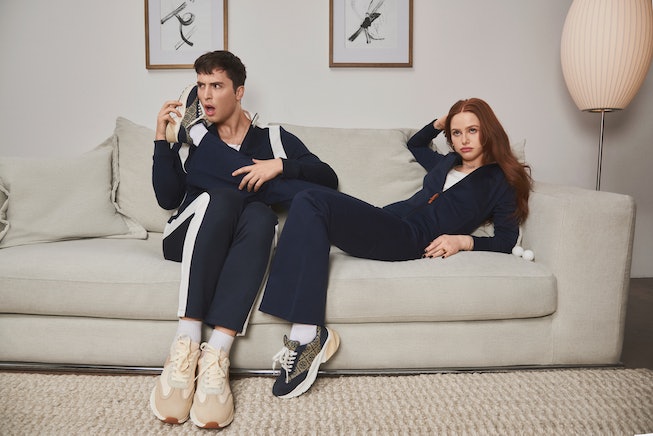 Who knew that Benito Skinner, famously known online as Benny Drama, and Riverdale star Madelaine Petsch made such a great team? The two partnered up to star in Tory Burch’s newest campaign, which debuted on Tuesday, April 26, and highlights the brand’s Good Luck Trainer that first launched in 2021. The spring-friendly sneaker features a wishbone in the sole (hence the name), a chunky silhouette, and a “Double T” logo motif.

“The Good Luck Trainer can really elevate a casual outfit while still being cozy and comfortable,” Petsch tells NYLON. The actress often styles the sneaker’s tan version with brown or black corduroy pants with a white cropped tank and layered gold jewelry. If she’s traveling, she usually throws them on with a sweatsuit.

Skinner prefers the sneaker in white for its versatility since he pairs the stylish shoe with pretty much anything. “I do think it's all about a cropped jean right now,” he says. “Quote me on that!”

For the campaign, Skinner played a few of his beloved characters — Cooper the Intern and beauty pro Jenni — while Petsch, who plays herself, tried to maintain a straight face throughout the funny video. “Shooting the Good Luck Trainer campaign was honestly a blast. The time flew by so quickly with Benny and the whole team, and it was such a creative and collaborative set,” she recalls. “Truly one of my favorite shoot days!”

As for Skinner, it was a “dream come true” to work with Petsch. “I spent most of my quarantine eating frozen mangoes and watching Riverdale. Cheryl Blossom is the queen of camp,” he says. “Also, she only broke once with my makeup artist character Jenni. She’s a true professional.”