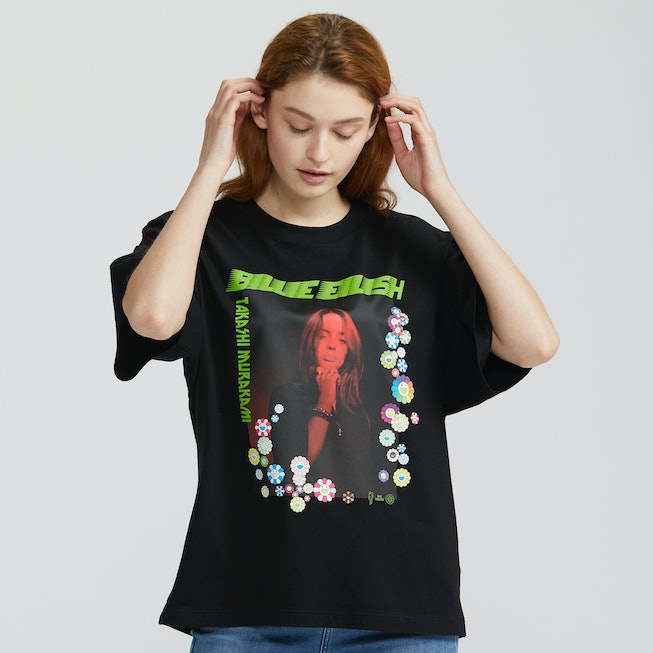 We might not know exactly when we'll be getting new Billie Eilish music anytime soon, but what we do know is that she's releasing a collaboration with Japanese artist Takashi Murakami for Uniqlo. On May 25, they'll be dropping a collection of limited-edition T-shirts that were exclusively made for the global retailer's UT line.

If you're not familiar with Murakami, you've most definitely seen his work somewhere in the music or streetwear space. The contemporary artist, best known for his colorful smiling flowers and anime-inspired characters, most recently partnered with Supreme on a charity box logo tee that raised $1 million for COVID-19 relief. He also designed the cover art for Kanye West's Graduation album, as well as the rapper's collaborative album Kids See Ghosts with Kid Cudi. Murakami even had a longtime partnership with Louis Vuitton, which included a collection of rainbow-hued monogram logo handbags that became "It" items among the young Hollywood set back in the early '00s.

As for Eilish and Murakami, the two creatives have teamed up plenty of times before. In 2019, Murakami worked on Eilish's cover for Garage Magazine, inspired by one of his own sculptures, and directed the animated music video for "you should see me in a crown." He's even designed limited-edition merch for Eilish, too.

See the full collection for women (T-shirt designs for men and kids will also be available), below, and mark your calendars for May 25 when the collab drops online.