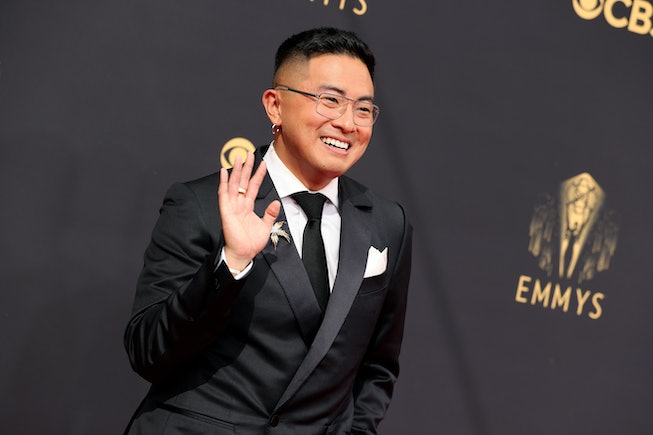 SNL’s Bowen Yang, who’s up for the Supporting Actor in a Comedy Series Award, arrived on the 2021 Emmys red carpet wearing Syro silver platform boots with his sharply tailored suit from Ermenegildo Zegna, along with a Tiffany & Co. brooch.

Syro is a queer-owned footwear brand from Brooklyn’s Bushwick neighborhood and co-founded by Henry Bae and Shaobo Han. The label prides itself on offering femme footwear styles up to size men’s 14 for all genders. Yang’s pair, the Rancho, dropped over the summer in silver and red, but you can pre-order a pair in black patent leather, which goes for $230, for delivery in November. The boot boasts a square toe, two-inch platform, and a five-and-a-half-inch heel.

Yang has made SNL history in 2019 when he joined the legendary show as its first Asian American cast member. Over the past two years, he’s often used his comedic platform for good, such as highlighting the rise of hate crimes against the Asian American community during “Weekend Update,” and wearing outfits that often made commemorative statements, like his Charli XCX “Vroom Vroom” merch during one of the show’s finale credits to honor the passing of collaborator and producer Sophie.

So it’s not surprise that Yang decided to use a major moment, such as the 2021 Emmys red carpet, to showcase an indie brand like Syro. Here’s to more thoughtful fashion statements from this SNL superstar in future appearances.