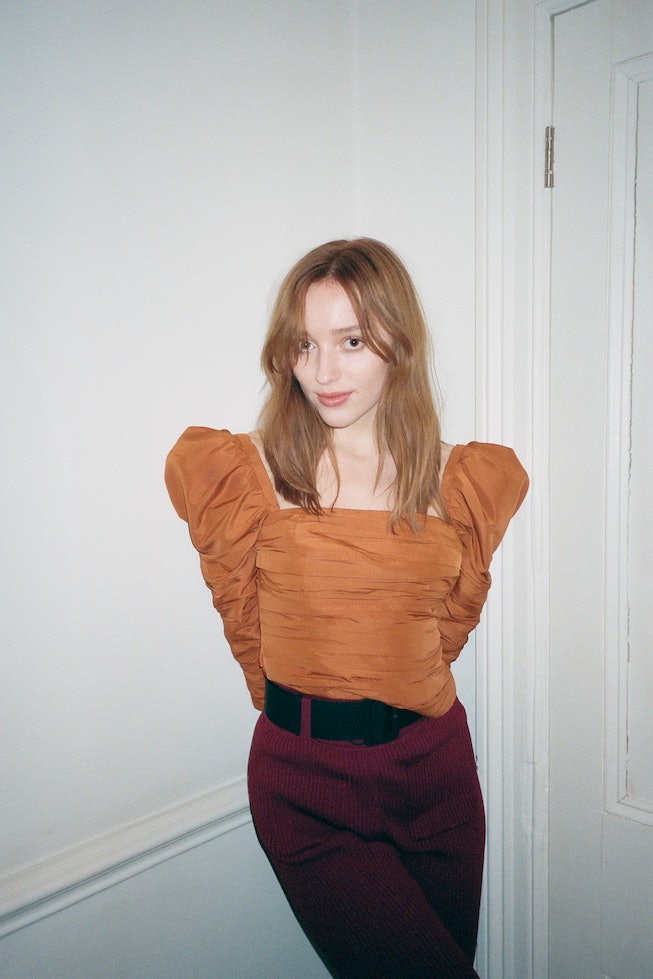 It was only a matter of time until the Bridgerton crew started popping up in high-fashion spaces. The Netflix series star Phoebe Dynevor has landed her first official fashion gig with Self-Portrait. The actor posed for photographer Nigel Shafran in London, wearing the brand's Fall 2021 collection.

"As I was designing this latest collection, I was thinking a lot about the British sensibility and that effortless approach to British style, which I am so often inspired by," said Self-Portrait's found and creative director Han Chong in an official statement. "I felt we needed to work with someone to bring this to life rather than present the collection in a traditional show format, and having captured the hearts and imaginations of so many people over the last few months, I knew Phoebe would be the perfect woman."

The opulent fashion in Bridgerton has prompted Regency-era trends to resurface in 2021. Despite this, Dynevor's own fashion sense is markedly different than that of her character Daphne.

"If I am going to buy something, I like it to be good quality and something that I can wear for years to come," she told L'Officiel this year. "I'm not down for the latest trends, and I don't want to be throwing out my wardrobe every year."

She added that her penchant for re-wearing things has caused some awkward moments as of late, thanks to her newfound fame.

"I have absolutely no awareness that people would ever want to take a picture of me," she said. "And I actually got papped recently at the airport, with the exact same tracksuit and the exact same scarf on."

Check out the photos of Dynevor in Self-Portrait's new collection, below.

NEXT UP
Fashion
The Wildest Front-Row Looks From Couture Week In Paris
Culture
Phoebe Dynevor Will Not Return for Bridgerton Season 3
Fashion
Apple Martin Is A Chanel Girl Now
Fashion
Jenna Ortega Is The Face Of Adidas’ Newest Line
Style + Culture, delivered straight to your inbox.