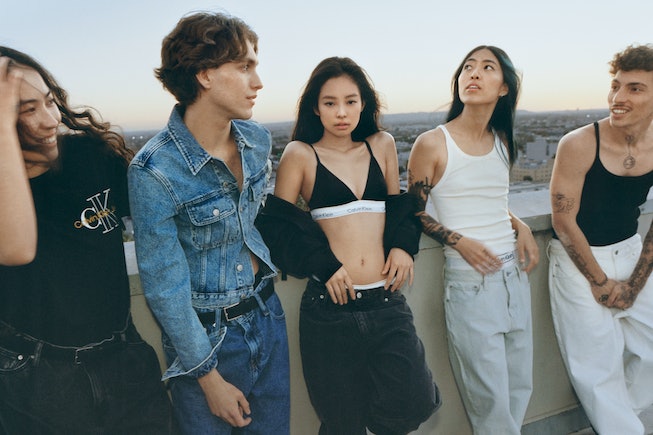 Calvin Klein is back with another campaign stacked with celebrity names for Spring 2022, which focuses on the buzziest acts in music, from K-pop to indie stars and everything in between. Photographed by Glen Luchford, the recent imagery, titled “All Together,” debuted on Tuesday, Feb. 15, and features a massive cast of 120 models total, along with a few familiar faces affiliated with the American brand, including Blackpink’s Jennie, who previously starred in Calvin Klein’s Spring 2021 campaign.

Joining Jennie is Solange Knowles, who’s no stranger to a Calvin Klein campaign either. She first worked with the brand back in 2017, curating her own cast for the #MyCalvins gig. The Spring 2022 campaign showcases the artist wearing the brand’s latest collection, such as bralettes and underwear in black and white.

Though Dominic Fike has recently been garnering attention for his breakout role as Elliot in Euphoria, the actor returned to his musical roots for another campaign with Calvin Klein. (He recently starred in the brand’s Fall 2021 campaign series.) Unlike Jennie and Knowles, Fike modeled alongside a large group of models to skate down the city streets or hang outside an unmarked building.

Photos by Glen Luchford/Courtesy of Calvin Klein
NEXT UP
Fashion
Jenna Ortega Is The Face Of Adidas’ Newest Line
Fashion
Apple Martin Is A Chanel Girl Now
Fashion
The Wildest Front-Row Looks From Couture Week In Paris
Fashion
Collina Strada & Vans Team Up For A Chiller-Friendly Collection
Style + Culture, delivered straight to your inbox.