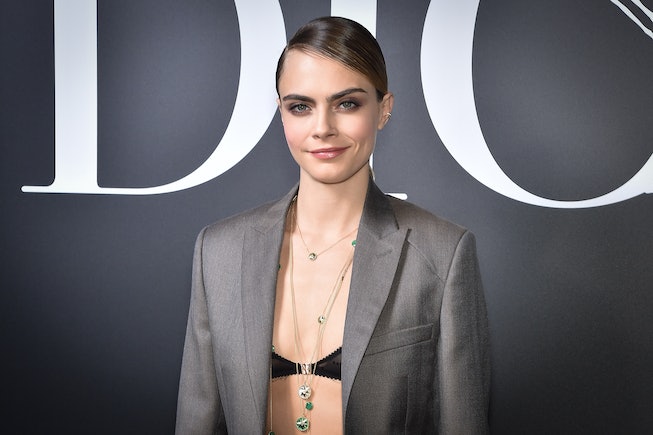 Turns out, Fiona Apple and Cara Delevingne are friends. Such good friends that Delevingne provided backing vocals for the title track of Apple's new album Fetch the Bolt Cutters, and she has the photos to prove it.

On Tuesday, Delevingne posted two behind-the-scenes photos of her and Apple during a low-key recording session at the musician's Venice Beach home to Instagram. "So proud of you Fiona!! Her new album 'Fetch the Bolt Cutters' is out NOW," wrote Delevingne for the caption. "I feel so lucky to have been a part of it (as well as my dogs!) and to make a small cameo on the title track."

If her appearance on the album seems random, it's less so knowing that the two have been "text friends for years," although their recording of the song was possibly the third time they had hung out IRL. In an interview with Vulture, Apple revealed that they've "only hung out twice in person."

"Cara [Delevingne] and I have been text friends for years. I wanted her to sing the line ["Fetch the bolt cutters"]," Apple told Vulture. "She brought her dogs, Leo and Alfie. And so all of our dogs were in this room with the door closed and they’re totally silent for the whole take of the song. And then at the end of the song they erupted. It was so perfect."

Apple later expanded on her decision to include Delevingne on the song, telling Billboard, "I love her voice, and I just knew our voices would go really well together."

Check out Apple and Delevingne's jam sesh, below.