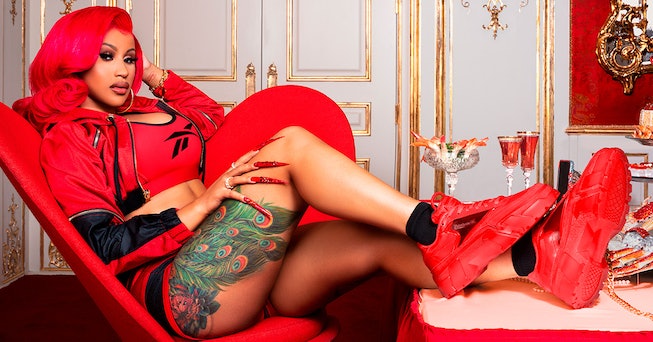 It was just last month when rapper Cardi B announced her first-ever sneaker collection with Reebok on her 28th birthday. Now, we have an official preview of the highly anticipated collaboration.

On Tuesday, Nov. 10, Reebok revealed its two new sneakers — the Club C Cardi and the Cardi Coated Club C Double — from the rapper as part of the next chapter in their longtime partnership. (She became the face of the global sports brand back in 2018.) The shoes were fully redesigned by Cardi B herself and inspired by a dystopian world. Each style comes in three colorways — red, black, and white — and feature a thick transparent sole, creating a modern and bold look for the classic 35-year-old sneaker silhouette.

The collection's debut is also accompanied by a new campaign titled "B Unexplainable," which celebrates Cardi B's personal growth as a rapper while pursing her passions in design and equality, despite society's traditional expectations of women.

"When we have the nerve to get the balance wrong, we're labeled as 'too much,' 'too extra,' 'too dramatic,' or 'too vain,'" noted Reebok's official press release. "Instead of trying to do what we're expected to do, let's do what we're entitled to do: move through the world without explanation. Just like Cardi."

The new Club C Cardi will retail for $100 and the Cardi Coated Club C Double will go for $80. Both sneakers will be available in women's and children's sizes and will be drop on Friday, Nov. 13, on Reebok.com and at Footlocker. To get an even closer look at the rapper's first sneaker designs, check out more imagery and a behind-the-scenes video of her creative process, below.

NEXT UP
Fashion
Paloma Elsesser Launches First-Ever Plus-Size Collection With Miaou
Fashion
Salehe Bembury’s Coveted Crocs Are Back Again, Here’s How To Get A Pair
Fashion
How To Wear 2022’s Biggest Denim Trends, According To A Stylist
Fashion
The Best Clear Bags For Concerts That Won’t Ruin Your Outfit