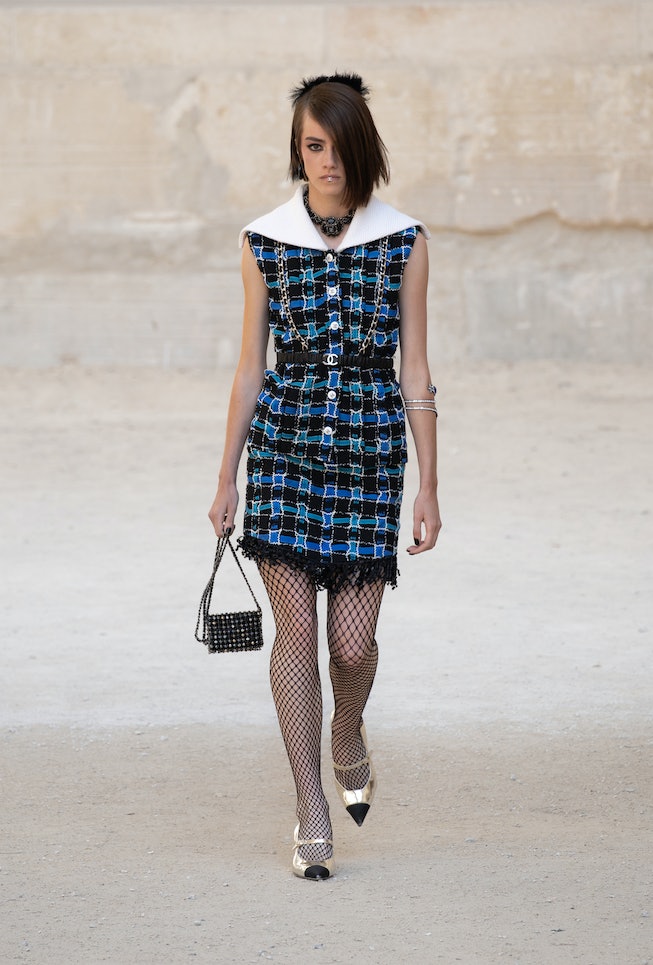 Chanel’s Virginie Viard has entered her punk era. The creative director cited Jean Cocteau’s 1960 film Testament of Orpheus, set in southern France’s Les Baux-de-Provence, as the main inspiration behind the luxury brand’s Cruise 2022 collection, but with an apparent punk-rock twist.

“With Karl, I was more focused on listening to him. Now, it feels like I am discovering other facets of Chanel,” Viard told WWD.

Studded leather, fishnets, layered chokers and necklaces, and garter belt bags made their way down the runway in the pre-filmed show. There were even Chanel logo lip rings, inspired by the late and longtime muse Stella Tennant. One photo of Tennant by Mario Testino particularly stood out to Viard, showing the model punked out in platforms and shades of plaid next to her regal grandmother, the Duchess of Devonshire.

“Echoing the extreme modernity of Cocteau's film, I wanted something quite rock. Lots of fringes, in leather, beads and sequins, T-shirts bearing the face of the model Lola Nicon like a rock star, worn with tweed suits trimmed with wide braids, and pointed silver Mary-Janes,” Viard stated in the collection notes. “A look that recalls as much the modernity of the sixties as that of punk...”

Take a look at Chanel’s provincial punk collection for Cruise 2022, below.