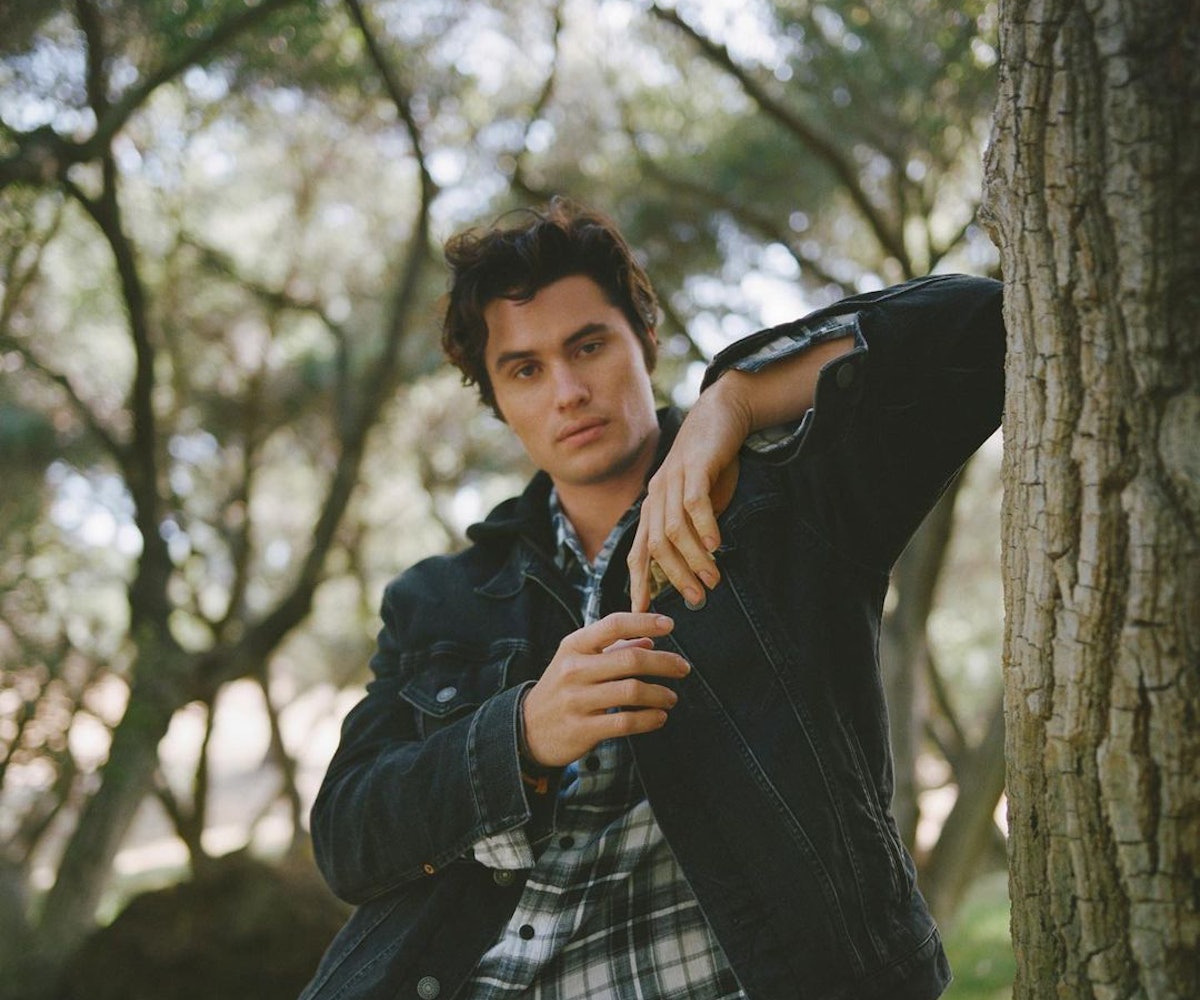 On Friday, Dec. 3, American Eagle kicked off the early morning with an interactive holiday shopping event at its SoHo location in New York, with guest appearances from the brand’s muses Addison Rae, Madison Bailey, and Chase Stokes. At the flagship store, invited guests were greeted with baked goods and coffee, a fun TikTok video booth, and, of course, a curated selection of the American Eagle’s new winter collection spotlighted by the famous trio.

This holiday season, American Eagle has introduced a range of pieces that not only make great gifts for your loved ones but will also have you wanting to treat yourself, too. Some of the standout items from the brand’s winter line offer everything you’d ever want to cozy up to and lounge around in, like comfy flannel hoodies, must-have jeans, chunky sweaters, oversized band tees, and so much more.

During the celebration, Stokes, who plays the brunette heartthrob John B in Netflix’s coming-of-age mystery series Outer Banks, was seen sporting the ultimate cabincore look, as he wore a red flannel hoodie over a gray tee, military-green cargo pants, and Sorel hiker boots, all by American Eagle.

Ahead, Chase Stokes spoke with NYLON about his favorite holiday styles and traditions, his partnership with American Eagle, and more.

You’ve worked with American Eagle for quite some time now. How has it been starring in the brand’s campaigns, especially with your co-star Madison Bailey?

It’s been great! I think doing our show and having that sort of platform that we’ve created to work with a brand that also hits our audience, in particular, has been fun. [American Eagle] has been so willing to allow our creative input with both of the campaigns that we’ve done, so it's been really cool to have our own creative touch on everything that we’ve done over the past year and some change now. Working with Mads is just awesome, and she's one of my best friends so we always have fun whenever we’re doing anything.

It seems like you’re diving more into the fashion world lately. How has that been for you?

I’m always about pushing boundaries and creatively expressing myself in different ways. So, you know, obviously, I have my work on camera, but being able to dive into the fashion space has been a lot of fun and a different kind of contrasting world. It’s another way to express myself, so I love it and I’m just going to continue to do my own little thing.

I also have a wonderful stylist that I work with, Avo Yermagyan, and he always knows what I like and what I’m into. He’s been with me since before Outer Banks started so we have an incredible friendship that is also a work relationship. We have a lot of fun doing stuff that whenever I’m wearing something, it’s always his mastermind genius behind it, as well.

What have been some of your favorite memories with AE so far?

Finding out that we were going to do the first campaign, and then me and Madison getting to shoot that in Charleston was so incredibly special because Charleston has become a home to all of us on Outer Banks. We shot that in our backyard and to have the creative input to do it there was just really cool. It was our first major campaign and we got to work with a company like American Eagle that has such good core values and cares about their consumers and the people that actually wear the clothes.

Do you have a favorite cozy winter trend that you’ve been loving so far?

Oversized sweaters, especially since I have a dog. Sometimes at like six o’clock in the morning when he wakes up and wants to go outside, the comfiest, warmest thing that I have available is usually a giant sweater of some sort. Also, I’ve been loving joggers, especially from American Eagle, and they’ve been my go-to over the last couple of weeks as it’s gotten colder. I’m shooting a movie in Atlanta right now and it’s actually colder in Atlanta now than it was getting here in NYC. It’s just the easy way to slap something on and go to work and when I’m walking my dog or whatever happens.

I know you must be so busy these days. How do you manage such a jam-packed schedule?

I’ve got a great team who keeps up with my schedule and I’m very grounded by my family. I'm very close with my mother and all of my siblings, so with them in my life, they’re the first people I text in the morning and the last people I text at night. Without them, I don’t know where I would be, so my saving grace is for sure my family.

What are the holiday traditions that you absolutely cannot skip out on, whether that’s with your family, friends, or yourself?

My mom is a big arts-and-crafts person during the holiday so we always have ornaments. Also, there’s one thing that we do before we open presents, which is to say one thing that we're thankful for to each person in the room. I have a bunch of siblings and so we go around the room and say why we’re thankful for every person. My mom is big on bringing everything and grounding it before you dive into gifts and all of the things that Christmas has, so I always love doing that because it’s always a tear in somebody’s eye. By the end of it, you’re super grateful for it, and it’s the season of giving instead of taking, so we’re always giving positive affirmations to those that you love.

Don't sweat the small things. In the last two years, really, everything has been so crazy and then the world opened up and you have all of these distractions around you. I’ve thankfully been working a lot this year, so it’s easy to get distracted because the world is so insane. Whether it’s a new variant of the virus or situations that are happening, family emergencies, I’ve actually had a lot of people who have passed in the last few years. So for me, it’s staying grounded in the things that matter and not worrying about the little minor things that nobody really cares about. Having humility and an ego check to say, “I’m just another human being walking down the street.”

What’s a great piece from AE that people must gift their loved ones or themselves this season?

I think these flannel hoodies are great because they go both ways. You can wear them down or take the hoodie off and then it can just be a nice little flannel. You can dress them up or just put on a nice pair of jeans and some boots to go out in. The last thing I would say is boxers. I think everybody loves a good pair of boxers to lounge around whether you’re a guy or girl, like it’s such a great piece to have. So especially with the holiday seasons where everything's slowing down, you’re like, “Man, I just want to lay down and turn on some Netflix in boxers.” Oh, and there are also these really nice moccasins that are super cozy, too.

Season 2 of Outer Banks aired not that long ago, but are you currently working on anything at the moment that you can share?

Right now, I’m doing a film with an incredible cast called Uglies and it’s based on the book series by Scott Westerfield. We actually finish filming in about two weeks and we’ve been doing that for the last three months in Atlanta with Joey King, Keith Powers, Brianne Tju, Laverne Cox who were just announced in it, as well. We’ve all been working together for the last couple of months and it’s an incredible story that is incredibly relevant with today’s day and age, with this whole social media craze and the perception of beauty being so skewed and flawed. I’m incredibly excited to tell this story and it’s been a labor of love, and we’ve enjoyed it and this cast as well, like we’ve become incredibly close.

Also, fingers crossed for season three of Outer Banks, you know, we're all sitting around like, “Please, can we do another one?” Netflix likes to keep everything very tight-lipped, so I’m sure you guys will find out as we find out.

NEXT UP
Fashion
Jenna Ortega Is The Face Of Adidas’ Newest Line
Fashion
The Best Celebrity Fit Pics From Paris Men’s Fashion Week
Fashion
The Wildest Front-Row Looks From Couture Week In Paris
Fashion
Collina Strada & Vans Team Up For A Chiller-Friendly Collection
Style + Culture, delivered straight to your inbox.