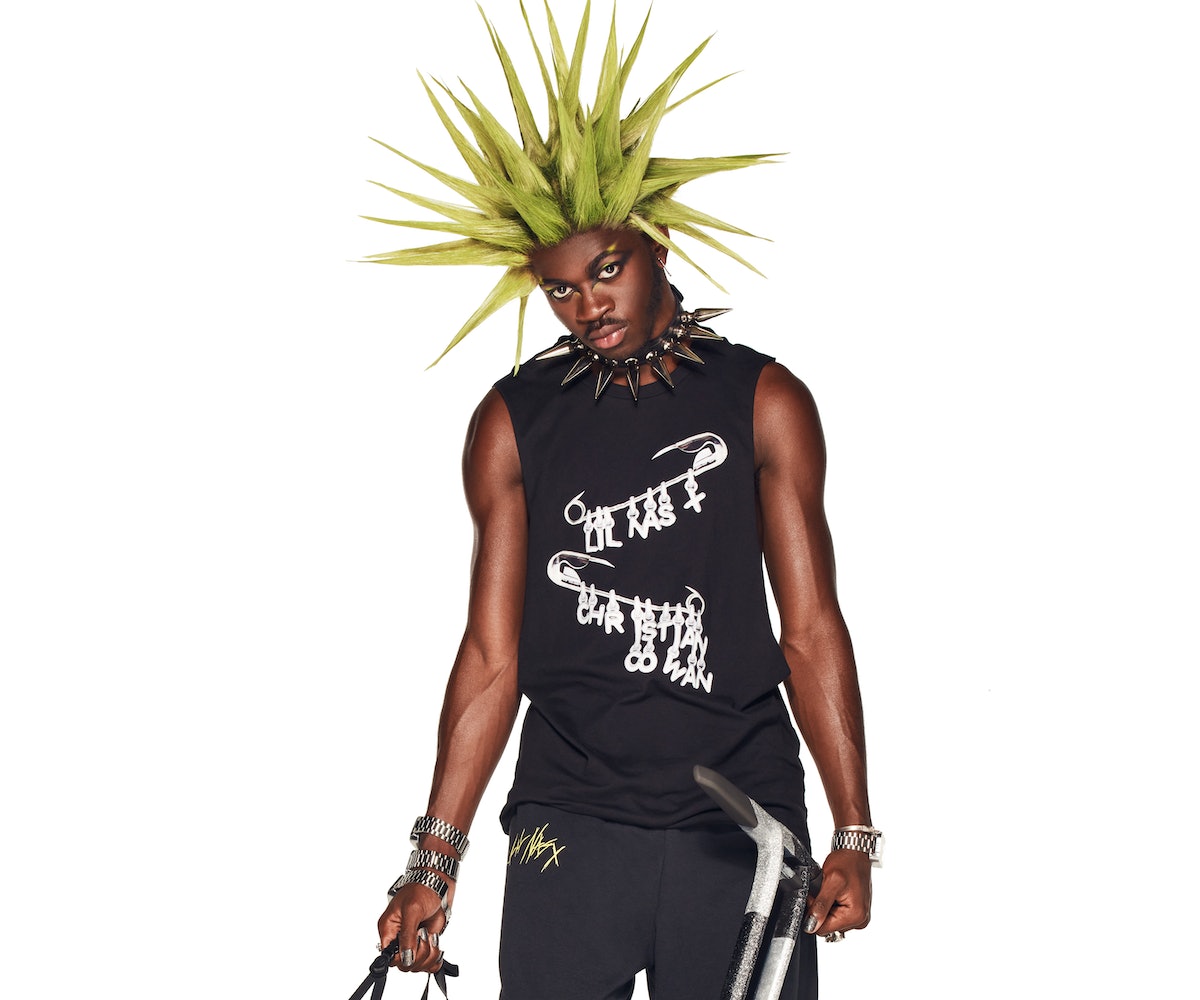 Christian Cowan is known for showcasing high-wattage glamour on the runway during New York Fashion Week. And while this season has challenged designers to approach their presentations differently (read: digitally), Cowan didn’t skimp on giving his all for his latest collection.

On Thursday, Cowan debuted a major fashion collaboration with Lil Nas X. (You may remember the designer’s Prince-inspired red carpet look for the “Old Town Road” rapper at the 2019 VMAs.) The two, along with Lil Nas X’s stylist Hodo Musa, created a ready-to-wear collection the combines the UK’s ‘70s punk scene — a nod to Cowan’s British roots — and how today’s American youth is calling for systemic change, especially ahead of the highly anticipated 2020 election.

“I usually give escapism, that is what we serve — escapism fashion fantasy,” Cowan tells NYLON from his London flat over Zoom. “But sometimes that just feels irresponsible. There's really big things going on that you do need to shine a light on. So how do I do both? The punk movement in the UK had such an identifiable aesthetic that I thought if I married the two — trailblazers in the modern-day world, but style-inspired by that era — you'll see how they really fuse together.”

With Cowan in London, his team in New York, and Lil Nas X and Musa in Los Angeles, the collection came together virtually, across the globe and different time zones. “This was our first artist collaboration in music,” says Cowan, who’s previously done partnerships with Le Specs, Giuseppe Zanotti, and the Powerpuff Girls, to name a few. “What was important to both of us was that it wasn't just some generic logo slapped on a T-shirt. It's really a fashion collaboration. It's high-glamour evening wear. I think it's a very unique approach to an artist-designer collab.”

The collection, which debuted with a fashion film and campaign starring such queer fashion icons as Marc Jacobs, Amanda Lepore, Jari Jones, Violet Chachki, and more, boasts Cowan’s signature statement gowns and dresses embellished with Swarovski crystals, bows, and feathers, along with more casual staples, like graphic tees and checkered separates. Later this fall, the collection will be exclusively sold on FORWARD by Elyse Walker, and all proceeds from the merch sold on Cowan's website will go towards a new fund through the Loveland Foundation that benefits the young Black queer community in Atlanta.

“We're so aligned on all of our beliefs, and I think he's such an amazing trailblazer for the queer community, being a rapper and being out and proud,” says Cowan. “It felt like a no-brainer to partner together and do something really cool and raise money for something good, so it was an all-around win.”

“What I love about this collection is not only are the clothes super sick and show-stopping, but I’m also really proud of what it represents and all the people that it will help,” said Lil Nas X in an official statement. “Atlanta is my hometown and the LGBTQ+ community is some of the most at risk, so I’m glad that we’ll be able to offer them some support.”

As for Cowan’s thoughts on what the future of New York Fashion Week will hold, he’s hoping for the best, whatever that may entail. “I still firmly believe in the magic of fashion week. I think it's great for the industry in terms of just being this engine that keeps the industry alive and focused,” he says. “But I do think people will change what they're doing — more exhibition-style events, more video, more screenings. Fashion should approach it more like the contemporary art world and really just make your own rules up. Your creativity should come out, however you want it to be.”