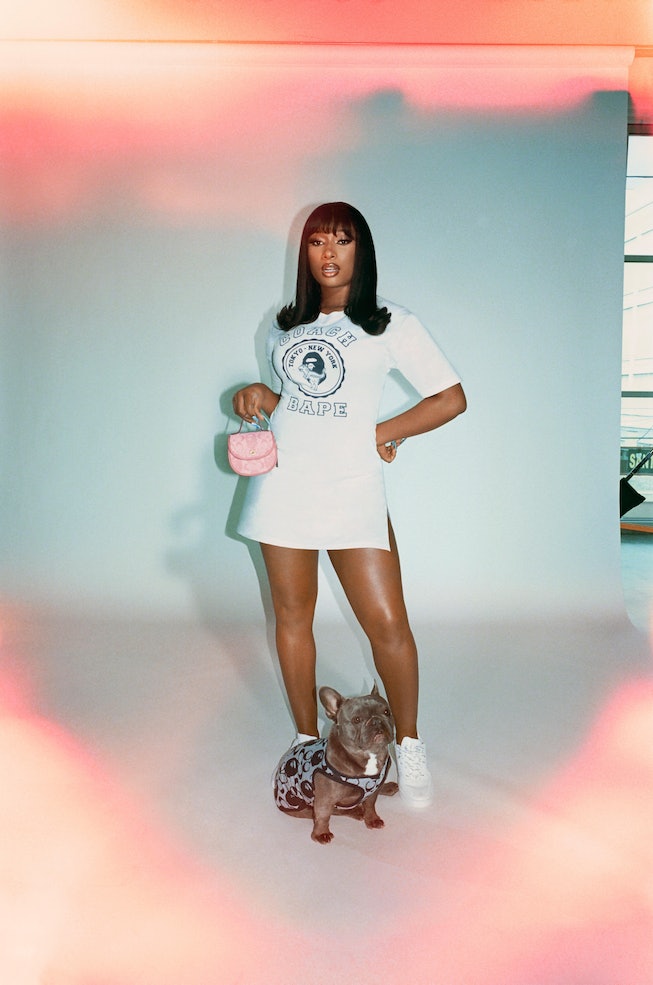 Coach and Bape are back at it again. The New York brand and Japanese streetwear label are set to release their second collection together, and they have a celeb-filled campaign to help show off the new pieces.

Photographed by Sandy Kim, who has recently worked with Skims and The New York Times, the new Coach campaign stars rappers Megan Thee Stallion and Cordae. Japanese model and songwriter Kōki also makes a return, as she was featured in the collaboration’s debut campaign in February 2020.

Bape (short for A Bathing Ape) has been around since the early ‘90s, and its coveted star-logo kicks were a hot commodity among sneakerheads back in the early aughts. Naturally, the Y2K-era brand is garnering more attention among Gen Z and nostalgic millennials, but Bape has always been prolific in its collaborations across almost every category, from fashion and beauty to sports and pop culture. Most recently, Bape expanded into skincare, teaming up with KNC Beauty on a special collection for its signature lip and body products.

“I first heard of Bape only last year, after Gunna dropped his collab with them,” Kim tells NYLON. “I think the brand is still popular because they stay relevant in the music and streetwear scene.”

For the shoot, Kim was inspired by “life as I see it,” and her favorite moment was working with Megan Thee Stallion, who brought along her French bulldog 4oe to model a custom piece of his own. (Sorry, pup owners, it’s a 1 of 1!) The second release will include bags, hoodies, and tees adorned with a limited-edition pattern that blends Coach’s monogram with Bape’s signature Ape Head logo. Plus, there will be footwear, ready-to-wear, leather goods, and accessories.

The new collection will drop on Saturday, July 24, on Coach’s website. Until then, see more of Kim’s work for the Bape x Coach collab campaign, below.