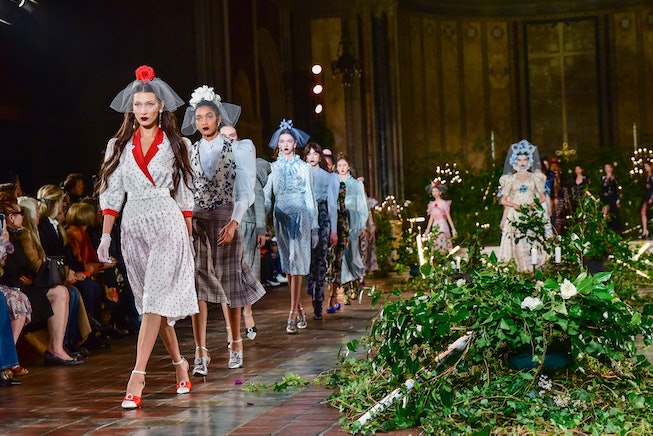 Following up the "Open Letter to the Fashion Industry" released on Tuesday by a group of designers and executives — including Dries Van Noten, Gabriela Hearst, Mary Katrantzou, Tory Burch, and more — another set of fashion leaders have released a proposal, called #rewiringfashion, on how the global fashion industry should rework the traditional system and calendar that's been in place for decades:

We are a group of independent designers, executives, and retailers from around the world who came to the fashion industry along different paths but for the same reason: a belief in the beauty, imagination, and craft that remain at the core of this business. And yet, we find ourselves facing a fashion system that is less and less conducive to genuine creativity and ultimately serves the interests of nobody: not designers, not retailers, not customers — and not even our planet. It's time to slow down and rediscover the storytelling and magic of fashion.

Facilitated by Business of Fashion, this group — from brands like Rodarte, 3.1 Phillip Lim, Isabel Marant, and Proenza Schouler to retailers and indie labels — has been meeting (virtually) over the past month to come up with changes across three industry pillars. First, the fashion calendar, which would reset and have fashion weeks take place in January and June. This would not only debut new collections just before they hit stores for customers to shop, but also reduce travel for buyers and media.

Second, the fashion show format (runway shows, presentations) needs to be fluid, allowing designers to freely choose how to creatively showcase their new collections to specifically engage customers. And lastly, reduce discounting by retailers. "We believe fashion retailers must break their addiction to discounting, pushing back end-of-season markdown periods, and putting a stop to broad mid-season sales," notes the proposal, which includes a stop to major discount "holidays," like Black Friday and Cyber Monday.

Both the open letter and proposal are aiming to accomplish the same thing: revising the current fashion calendar so that it's more in line with the see-now, buy-now approach that only a few designers have implemented (or tried and failed) for some time. Though, this proposal offers a more in-depth plan of execution, along with calls to change the fashion show format and retail discounting. As Fashionista.com points out, true change can likely happen if a major luxury conglomerate, such as Kering (Gucci, Celine, Balenciaga, Saint Laurent, among others) and LVMH, comes on board, too.