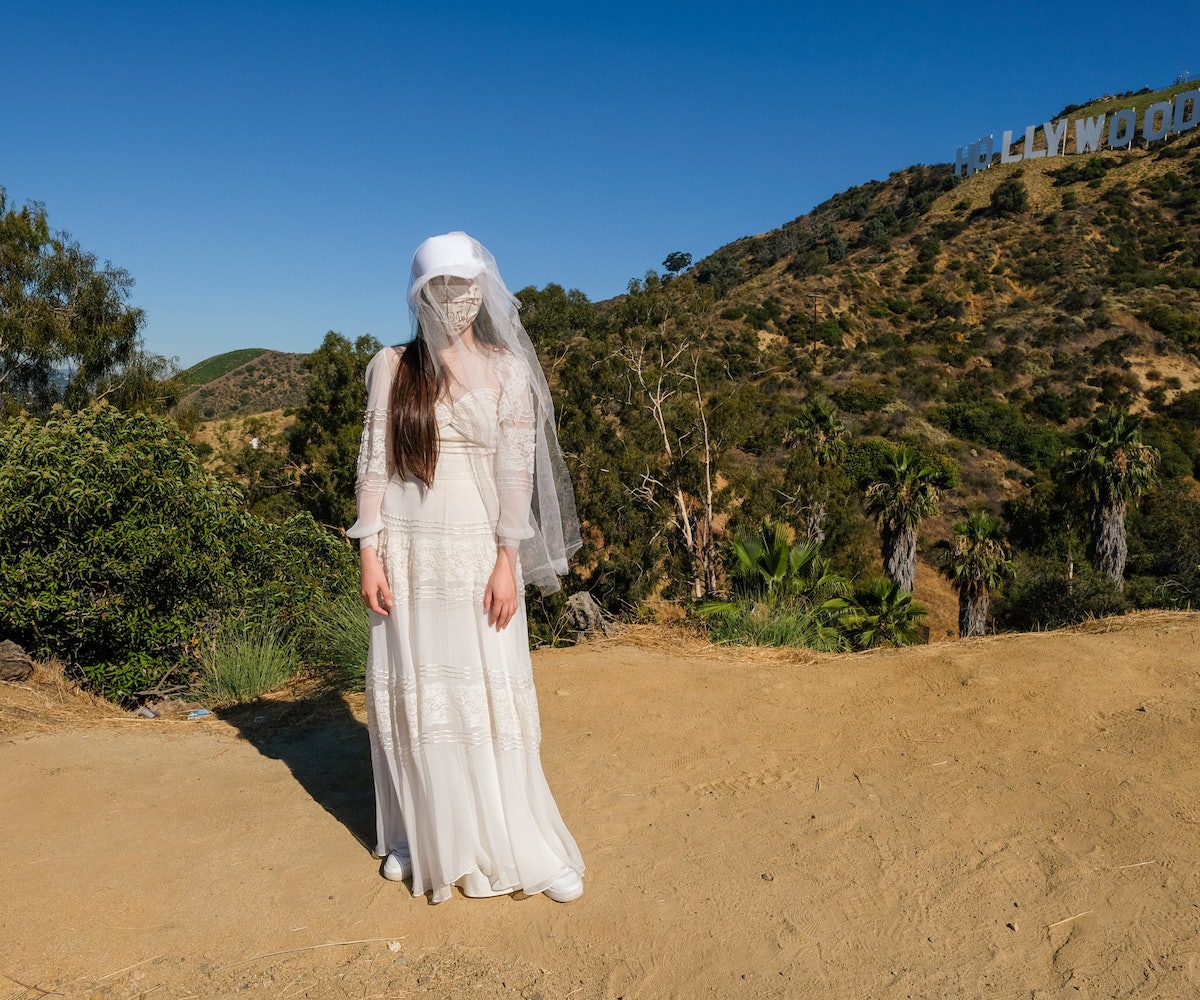 Courtesy of Imitation Of Christ

New York Fashion Week this September was destined to be unusual. The COVID-19 pandemic and resulting lockdowns put a strain on not only burgeoning designers but big-name labels, as the fashion industry struggled to see a reality for future fashion weeks.

As New York Fashion Week is set to kick off on Sunday, Sept. 13, many designers are taking new approaches. Some will continue to show with in-person events (that abide to the city's social distancing guidelines), while others have refused to show at all, most especially big marquee names, like Marc Jacobs, Michael Kors, Ralph Lauren, Pyer Moss, and Proenza Schouler, to name only a few. Others have found new ways to present their new collections, from short films to digital lookbooks.

Despite the peculiar circumstances, there are still designers who will make their official New York Fashion Week debuts this month. Some brands, including Frère and Wolk Morais, are already established in the industry with celebrity clientele, and others are eagerly entering into uncharted fashion week territory.

Get to know 14 of the brands and designers, including Aknvas, Dur Doux, Presley Oldham, and more, making their debut at New York Fashion Week for the Spring 2021 season, below.

Prior to launching his first independent brand Aknvas, designer Christian Juul Nielsen worked under John Galliano at Dior before becoming the creative director for Herve Leger. Nielsen will be showing his first menswear collection under Aknvas this fashion week, conceiving the idea for a men's capsule line during his time in quarantine.

"I wanted to create a collection of clothes that I wanted to wear," Nielsen told Mr. Mag. "I've always been drawn to cotton shirting, but wanted to make it fresh and relevant, especially to fit our changing lifestyle. When styling the women's lookbook, I incorporated many of the men's pieces. I think people are wearing what they want and what feels right, not sticking to the gendered categories."

Fun fact: Nielsen was the creative brains behind Jennifer Lawrence's Dior Oscars gown, which she tripped in on her way to accepting her award for best actress in 2013.

The Chicago-born menswear designer, who founded her label in 2015, studied at Parsons and Central Saint Martins, as well as worked as a design intern at Wes Gordon. Colleen Allen pays little attention to the role of gender in her work, despite being labeled as a menswear designer.

"I never intended on gender being a main theme of my work. People started questioning my intentions after my first collection and it sort of caught me off guard," she told This Generation. "I was just portraying men how I saw them, as a reflection of my personal worldview. I think being a woman designing for men is a big part of this. I thought well why can't men experiment with different elements of style each season like women do? If you're into ruffles one season and military jackets the next, that doesn't mean you're changing your gender identity or sexuality. I think it's exciting to give men options to have fun with clothes. For women, it's commonly accepted that the way they dress is an extension of their personality. But for men, once you hit a certain age you get stuck in this uniform. I'm really starting to explore and subvert these societal expectations."

Najla Burt and Cynthia Burt make up the mother-daughter team behind Dur Doux, a brand creating affordable luxury based on the translation of the label's name, which in French means "hard soft." The women made a deliberate choice in the beginning to keep a low personal profile and let the clothes speak for themselves.

"If you go back and look, you won't see any pictures of us," Burt told The Daily Beast. "We deliberately wanted people to make their own judgments about who they thought we were. Are we French? Are we European? [Staying out of the limelight] worked for us."

Designer Michelle Duncan managed to launch her own label while also keeping her day job as global partnerships and creative strategy lead at Estée Lauder, where she oversaw brands like MAC, Bobbi Brown, Clinique, and La Mer. Her role at Estée Lauder gave her the tools to navigate building her own brand and persevere during a pandemic.

"We remain extremely optimistic and vigilant on the future. In this time, the Duncan brand ethos is more relevant than ever before and we will continue to create armor for the multifaceted female," she told WWD. I pride myself on being a businesswoman and a designer/creative director; we are prudently redirecting investment rather than slowing investment. We also see this as an opportunity to fearlessly adapt and accelerate into the turn. Most importantly, we look forward to continuing to serve Duncan females around the world."

Frederick Anderson's love of femininity and strong women is apparent in his collections. He's dressed Beyoncé on multiple occasions, the first time being the gold tuxedo she wore during her "Love On Top" music video back in 2012.

"I love women and design clothing to enhance and empower individuality," he noted before presenting his last collection in February. "I believe fashion is your conversation with the world. If so, then speak with an individual and authentic voice."

Davidson Petit-Frères is no joke when it comes to menswear. His designs have been worn by Michael B. Jordan and Jay-Z, with the latter being a frequent wearer. The rapper and entrepeneur has worn custom Frère pastel suits on multiple occasions. After taking a break during quarantine, Petit-Frères announced that he would be debuting his first womenswear collection on the official CFDA calendar during New York Fashion Week.

"This time has allowed me to celebrate where I have been, appreciate where I am now, and look ahead to where I aspire to be," he wrote. "After months of being with family, Im happy to be returning to work to do what I love most and share with you and the world what I have in store."

The beloved brand of the mid-aughts is back with a new crew of young designers on rotation. In July, the brand's return welcomed Lulu Syracuse, Jersey Bond, and Hudson Schaetzke, all under 20 years old, as the new creative directors of the brand, and founder Tara Subkoff has plans to bring on an entirely different team of collaborators each season. For Spring 2021 at New York Fashion Week, Imitation of Christ's new collection will debut with "gorilla screenings." Perhaps the brand's OG muse Chloë Sevigny will show her support.

This is the sustainable denim brand's first time on the CFDA roster. Designer Miko Underwood is driven by history, particularly the Civil Right Movement in the 1960s, in telling stories through sustainable denim.

"Denim served not only as a rebellious uniform to the culture of the middle class activists, but also as a soul tie to the Black laborers," she told The Zoe Report. “The significance of the SNCC (Student Non-Violent Coordinating Committee) denim uniform or 'SNCC skin' served to connect with and advocate for the Southern Black sharecroppers. In adopting the clothing of Black laborers, instead of the attire worn by the Black middle class, SNCC was consciously reevaluating the politics of respectability.”"

Presley Oldham sources the freshwater pearls he uses in his pieces from flea markets in Los Angeles and New York, as well as the surplus from the Texas factory where his uncle, designer Todd Oldham, created his couture and ready-to-wear collections. Rather than putting on a show or shooting a lookbook for his new collection and fashion week debut, Oldham tapped back into his Texas roots and film background to create a video with his close friends.

Theophilio was recently announced as one of Teen Vogue's Next Generation Designers. Designer Edvin Thompson launched the label just four years ago and includes upcycled materials to create his boundary-breaking pieces.

"For women and men who show courage while facing an adversary," he told Teen Vogue. "I design for evidence of trials and triumph, adhering to the constant celebration of life."

Venice Wanakornkul's designs are intended to be resourceful and easy to wear in the everyday. She spent time as an intern at Telfar, where she learned a bare-bones efficiency that she's taken to her own label.

"They don't work as a regular fashion house, but more like a team with ideas — they come up with the concept and make the product," she told 1 Granary. "They save so much time because they don't make ten toiles before production. The studio at the time had no stock of wasted fabric. They just come to work with a pencil and their brain – it's a clever way of using resources."

26-year-old Jackson Wiederhoeft already has an impressive résumé, having worked for Rihanna and Lil' Kim. If you've watched Lady Gaga's "Stupid Love" music video, then his work is already familiar. He's taken his designs with world-famous pop stars, as well as his time at Thom Browne to inspire his own work, which is equal parts eccentric and fanciful.

"Having my own label is my dream come true after sketching and collecting fabrics for so many years," he told Financial Review. "I feel so lucky."

Outlier has tapped designer Willie Norris to lead the charge for its New York Fashion Week debut. The 12-look collection with be presented over a period of 24 hours on Instagram. The brand is encouraging comments and engagement to start a dialogue that will influence its production over the coming months.

Designers Brian Wolk and Claude Morais moved from New York to Los Angeles in 2014 and quickly found inspiration for their label Wolk Morais. The duo will debut their new collection through a fashion film titled Driven, inspired by the city.

"Los Angeles has been the lead character for our creative journey thus far," the designers said in a statement. "For Collection 9, we felt compelled to feature the city as the backdrop for our film and share the voices of the community that inspire our work in tis incredible moment of change."