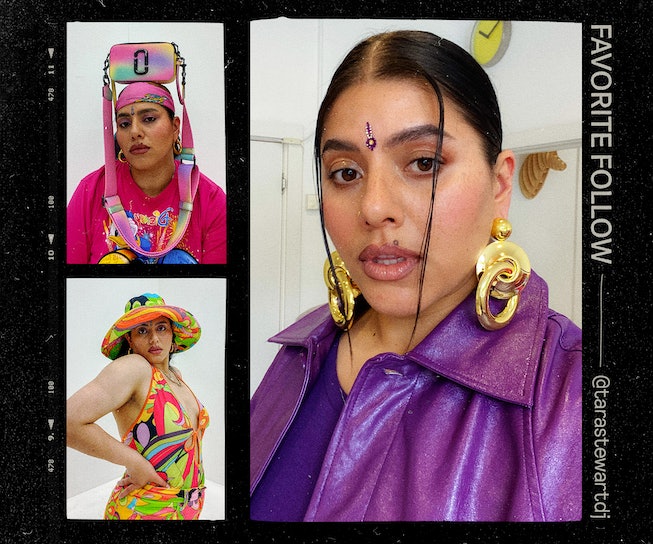 “I grew up in a small artsy town in Australia called Alice Springs where my dad (originally from Belfast, Ireland) owned a bar, whereas my mum (of Malaysian-Indian descent) owned an Indian restaurant. We used to have tons of open mic nights, and so I built an affinity with creative arts from a young age,” Stewart tells NYLON over Zoom.

However, it became evident to her soon enough that she was a city girl at heart: “I’ve never been someone with a five-year plan in mind, but I just knew that it was time to leave home to pursue something new in my life,” says Stewart. In 2011, she decided to take the plunge and move to Dublin. This kick-started a new chapter in her life, and 10 years later, it’s safe to say that she doesn’t regret it one bit.

Like many diasporic Indians, the 31-year-old has had her fair share of hiccups in searching for answers to existential concerns around the question, “who really am I?” While she may not have cracked the code completely, Stewart is steadfast on not falling under the elusive trap of doing what everyone else is doing. This clearly reflects in her distinctive social media DNA — an amalgamation of wildly different sartorial elements. (Think: baby-blue velour tracksuits, blinding neon sunglasses, basketball-shaped bags, silk saris, and pink cowboy boots.)

The one thing that accompanies Stewart everywhere she goes — be it playing behind the decks at an event or rolling up for a meeting — is a bindi planted firmly on her forehead. An integral aspect of Hindu culture, bindi is a colored dot or jewel that is traditionally worn by women and represents the “Third Eye.”

Along with this accessory, Stewart has a never-ending love affair with six yards of elegance, also known as the sari, that is confirmed further when she excitedly flaunts her latest purchase on camera during our conversation: a dazzling purple chiffon sari with sequins galore. “I love how diverse the sari is, it can be customized to suit every body shape or type,” she says. “The best part is I can mold it to be more ‘me’ or modernize it by wearing trainers underneath or carrying a baguette bag, without losing the sari’s traditional silhouette.”

Ahead, Stewart divulges her thoughts on personal style, embracing her culture, her love for streetwear (and how it started), and more.

On her constantly evolving personal style

“I’ve gone through phases of identity crisis; donning head-to-toe black in my 20s to blend in with the crowd and then wearing loud colors or the most ‘extra’ look in my wardrobe a few years later. Through TikTok, Gen Z really taught me that you don’t need to stick to a single aesthetic or just wear one type of thing.

One morning, you wake up and might want to dress like the lead character in an ‘80s movie, other days you want to be channel your inner P. Diddy or Stevie Nicks — and that’s completely OK. You should wear whatever feels right at any point in time and play dress-up because that’s the beauty of fashion. Style should be fun and never stressful!”

On paying homage to her Indian roots

“Last year, I attended the Brit Awards in a black sari and no one batted an eyelid on the tube. But then I did get a comment under a picture on Instagram that read, ‘What on Earth is she wearing?’ I mean, it’s 2021, know what a sari is; you’ve seen it in on TV and in Bend It Like Beckham.

Some days, I also get the odd look on the streets. It’s hard because you do get a little bit self-conscious when incidents like this happen. Once on my way to a meeting, I remember someone saying, ‘What boat did you come off?’ I took my bindi off straight away after that because I was so upset. But I was more-so disappointed in myself for doing that based on someone else’s comment because it’s important to me as a woman of color to represent my heritage and keep that tradition alive. Where I come from and my family mean everything to me.”

On unapologetically living in color and bling

“I’ve grown up watching Tamil soap operas and Bollywood movies, so it’s only natural that I’m fond of pairing bright colors with clashes of print. I think I’m drawn towards pink the most because my mum hates it and this is probably my weird way of subconsciously rebelling against her.

I remember getting hot pink streaks in my hair a few years ago and my grandma was in utter shock when she realized they were real and not clip-ons! Every time we go to an event, I’m reaching for all the jewelry I can get my hands on and they are always trying to take it off me or tone it down. Although, I think my style has grown on them a bit now because my mum likes it when I sport trainers that match the color of my sari.”

On her favorite accessory and manifesting her own brand

“I think people are more keen on doing the most with their #OOTD. At least, I can speak for myself because even if I step out for just a casual dinner, I feel like using this rare opportunity to look as glam as possible. I have a thing for matching my sunglasses to my bindi. One can guess that my collection of accessories is always growing, and I definitely want to start a sunglasses brand one day — zero plans in motion yet, but just putting it out there in the universe!”

On hip-hop style and choosing comfort over everything

“I’ve played basketball for about 10 years and that, along with MTV, is where my love for streetwear began. ‘80s and ‘90s hip-hop style has a massive influence on me because it proves that you can look sexy without wearing something tight-fitted. I really look up to Queen Latifah and Missy Elliot because they flipped the notion of having to wear revealing clothes to look sexy, one can wear men’s clothes or something baggy and look equally fabulous.

That’s why I’m obsessed with collecting bomber jackets, tracksuits, high-waisted pants, and Nike Air Max sneakers. Why wouldn’t you want to be wearing a bubble at the bottom of your feet? I don’t really care for trends, especially because they are moving so much faster than ever before. Comfort is my number one priority. I could never suffer for the sake of fashion.”

Follow Tara Stewart on Instagram and TikTok. Tune into her radio show on 2FM from Monday to Thursday at 2pm EST and Sunday at 4pm EST.