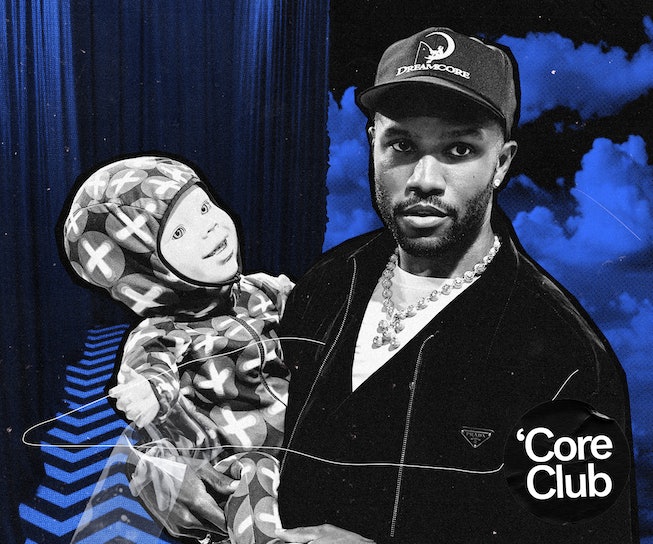 Whether it's a fashion trend on TikTok or a certain style taking over Instagram, internet aesthetics are always changing online. Our series ‘Core Club breaks down the looks that you're starting to see a lot on social media and highlights the people and brands channeling it best. Next up: dreamcore.

In the grand spectacle of the 2021 Met Gala, a prophet stood among the rest to propel the dreamcore aesthetic on the world stage. While holding a green impish baby, Frank Ocean and his “Dreamcore” cap brought the internet style to the limelight. By definition, Ocean captured the dreamcore look on the red carpet with little-neon-baby surrealism, and, of course, his hat making a play on the Dreamworks logo.

As the name suggests, dreamcore is an aesthetic that’s based in surrealism. Floating in the ether somewhere between weirdcore and traumacore, dreamcore sends chills down your spine as you have trouble grasping what’s real. The best way to describe it is having the same feeling as a David Lynch movie, a Twilight Zone episode, or a Cocteau Twins song. The subgenres of dreamcore include hypnocore and fever dream — states of confusion, uneasiness, and being controlled. Visuals are optical illusions, spirals, clouds, long hallways, and déjà vu.

Popular TikTok creator Jordan Gretzner describes dreamcore as “a strange but comforting nostalgic feeling, something that feels familiar but you can’t put your finger on it.” Jordan’s own dreamcore posts will often get more than 30K likes and usually touch on themes of existentialism and derealization. “I think about the purpose of my videos and if they’re meant to have odd or creepy and darker undertones, then I put them into playlists based on that. I have a playlist called ‘weird stuff’ and one for just dreamcore,” says Jordan. “I have always liked things that made me think, and ‘weird’ things, like The Twilight Zone, have always been something that fascinates me. I discovered I like that weird, uneasy feeling, and I like making videos that make people feel the same way.”

Longtime Twilight Zone and David Lynch fan, Wesley Holmes, said the aesthetic draws her in when she’s not feeling extremely distracted. “I really like surrealism and chaos and just general bizarreness in film,” she says. “Ultimately, what it boils down to is that most of the time it is senseless. It’s not like other art where you have to be extremely educated to feel like you can even contribute to the conversation. Like horse d*cks? Floating flesh balls? Sometimes it’s fun to not have to assign meaning to everything.”

Something about the uneasiness of the aesthetic resonates with the TikTok audience, as well. Dreamcore carved its place in pandemic internet culture with the hashtag reaching 923.7 million views in October 2021. When looking up the hashtag, one of most viewed posts has reached 3.6 million views and features the creator Kayla Moore, or @vintagepast on TikTok. In the video, Moore hauntingly sings to her mirror reflection before looking directly in the viewer’s eyes. Comments on the TikTok video look something like, “Everyone is scared but I found this video so satisfying, like I can’t stop watching” or “U have terrified me for life ma’am have a good day.”

“I think the post did as well as it did because it was so subtle,” says Moore. “In my opinion, the best horror isn’t overtly scary, it’s just enough to play on a real fear and make someone a little uneasy. If I did scary makeup or used fake blood, it would be a different kind of scary, but not the kind I wanted to go for. Like dreamcore, the video is eerie, but it’s also a little bit nostalgic — a little bit comforting and a little bit unsettling — all at the same time.”

Popular TikTok creators in the space also include @ashurgharavi, @tralz, and @peaboy3, who all use the same type of imagery of being isolated and lost while questioning reality. Often the posts draw upon uncanny themes, like liminal spaces, or a transitional area between two locations. Liminal spaces TikTok is a nostalgic wonderland of empty playgrounds, laser tag arenas, and abandoned offices. As Dazed puts it: “On the surface, liminal spaces can be defined by their in-between-ness. Places like airports, hotels, and train stations can be described as liminal, but it can also describe existential feelings of being neither here nor there.”

Ceator Kelsey Blevins, @valiumdreams, says liminal spaces and dreamcore is so popular because it’s something everyone can relate to. “They give a sense of familiarity that everyone has experienced in their lives,” says Blevins. “Liminal spaces are meant to provide a sense of eeriness and familiarity. I think in order to achieve that there should be no people around as it gives off a more common and personal feel.”

Eeriness, desolation, and abandonment are also common themes during the current catastrophic event in our lives. Now that we’re in the middle of deep quarantine and COVID cases waning, we are caught in the liminal in-between stage of the pandemic. Blevins, who visits empty shopping centers for content, looks through old 2000s photos, and Googles nostalgic kidcore for content says, “With places going out of business, more empty buildings and passageways have been created and the emptiness and desolation of the world at the moment really gives off that liminal feeling.”

NEXT UP
Fashion
Cybercore Is The Next Tech-Inspired, Y2K Fashion Aesthetic Trend
Fashion
Behind The Fashion And Beauty Of Gregg Araki’s Nowhere, 25 Years Later
Fashion
The Popcorn Top Is The Latest Y2K Trend Making A Comeback
Fashion
How To Wear 2022’s Biggest Denim Trends, According To A Stylist