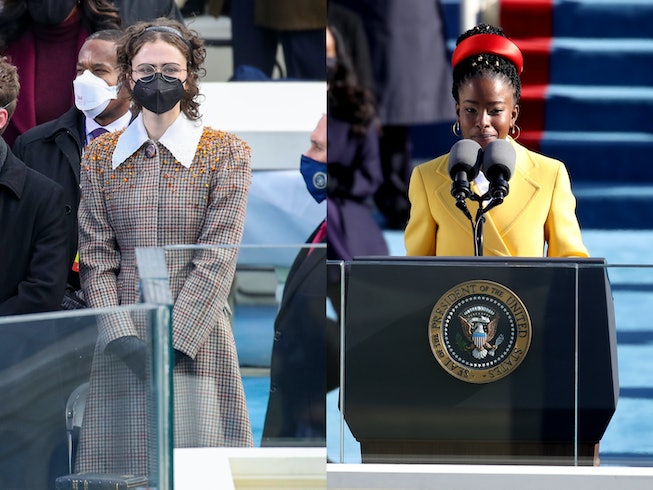 After garnering lots of attention at the Biden Inauguration, both Ella Emhoff and Amanda Gorman landed modeling contracts with IMG. Emhoff's new deal with the major agency was announced on Thursday, following Gorman's official announcement just a few days prior.

"I was pretty surprised when everything with IMG was happening because when I was younger, I never saw that as being part of my timeline," Emhoff, who has been modeling over the last year while working with a smaller agent, told The New York Times. "As someone who, like a lot of young girls out there, had self-confidence issues, it is intimidating and scary to go into this world that is hyper-focused on you and the body."

Emhoff and Gorman both made waves online upon their appearances at the highly watched ceremony on Wednesday, Jan. 20. Spectators admired Emhoff, a current fashion student at Parsons, and her striking style during the inauguration events, which included an embellished Miu Miu coat and a head-to-toe Thom Browne look. Meanwhile, the world was in awe of Gorman as she read her poem "The Hill We Climb" in an outfit that consisted of pieces from Prada and gifts from Oprah Winfrey. (The National Youth Poet Laureate is also expected to recite an original poem before the Super Bowl in February.)

While the inauguration was full of must-see fashion moments, it was Emhoff and Gorman who truly had the biggest influence. According to Lyst, Emhoff's outerwear choice caused a 455 percent spike in searches for Miu Miu coats, while Gorman's Prada coat caused a whopping 1328 percent jump in searches for "yellow coats." Vogue reported that her padded red headband quickly sold out online, as well.