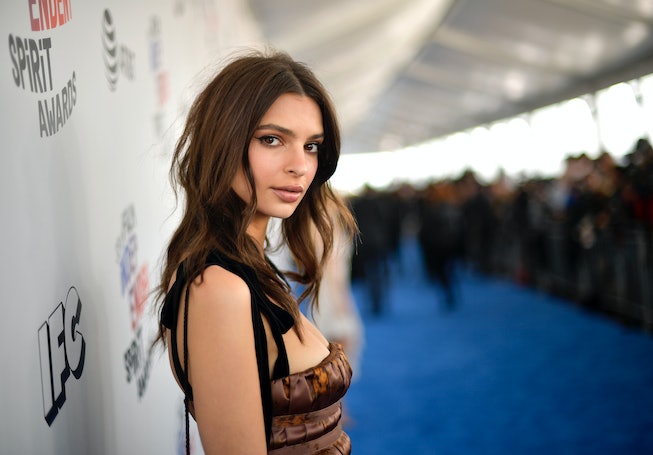 Emily Ratajkowski's pregnancy is already shaping up differently than most celebrity baby announcements. Ratajkowski showed off her growing stomach on the digital cover of Vogue released on Monday, writing her own cover story in an essay about her decision to not learn the baby's gender.

"I like the idea of forcing as few gender stereotypes on my child as possible," Ratajkowski wrote. "But no matter how progressive I may hope to be, I understand the desire to know the gender of our fetus; it feels like the first real opportunity to glimpse who they might be. As my body changes in bizarre and unfamiliar ways, it’s comforting to obtain any information that might make what’s coming feel more real."

Ratajkowski's friend and Vogue constant, Lena Dunham, directed a short film for the publication following the model's early journey with pregnancy as she attends doctor's appointments, holds up matching baby clothes, and walks around Manhattan. In her essay, the model and actress admits she feels like she is having a biological boy.

"I used to use magical thinking whenever I wanted something to go a certain way. Now, though, I don’t try to envision a pink or blue blanket in my arms. I’m too humbled to have any false notions of control," she continued. "I’m completely and undeniably helpless when it comes to almost everything surrounding my pregnancy: how my body will change, who my child will be. But I’m surprisingly unbothered. Instead of feeling afraid, I feel a new sense of peace. I’m already learning from this person inside my body. I’m full of wonder."

Read the rest of Ratajkowski's essay on Vogue.com and watch the short film below.