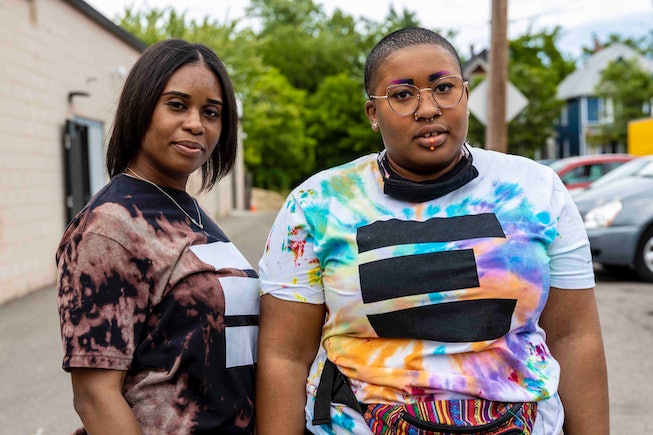 When Veronika Scott was a 21-year-old junior studying product design at Detroit's College for Creative Studies, she was tasked with designing a product that would make a difference in the community. Scott took her idea, a durable coat that can also serve as a sleeping bag and over-the-shoulder tote bag, to a local homeless shelter where she received some blunt feedback.

"You! You with the coat! Coat lady!" a woman shouted at her, as she told CNN in January. "This is pointless! I don't need a coat! I need a job!"

After that moment, Scott came up with the idea of Empowerment Plan, which now hires homeless people as full-time employees for the nonprofit organization. The company boasts some high-power fans, including Diane von Furstenberg, who has continued her support since Scott won the People's Voice Award at the DVF Awards in 2014.

"When it started, it was more about this product that we had — the coat. And it's really evolved into more of the workforce development aspect of what we do, and how we can create permanent, generational change through employment," Erika George, Chief Development Officer of Empowerment Plan, tells NYLON. "The coat is the vehicle that we're able to do that. It serves a really great need and purpose."

Empowerment Plan works directly with local homeless shelters to hire its team members, taking on four or five new employees at a time, which allows them to offer extensive on-the-job training to learn sewing and manufacturing skills. The company also addresses other barriers that often prohibit people from being able to take a job, including housing, transportation, and childcare. On average, employees stay with the company for two to three years before moving on to other jobs. Some continue working within the sewing and manufacturing fields while others have shifted to different industries, like home health care, customer service, and medical billing.

While 60% of the 40-hour work week at Empowerment Plan is spent on coat production, the other 40% is made up of supportive services, including domestic violence support groups, GED prep and tutoring, meditation, and financial health and wellness.

Since the COVID-19 pandemic, the organization has been forced to shift its usual focus and adapt to new, unexpected changes. Beginning in April, the factory pivoted production to making isolation gowns for frontline healthcare workers in local hospitals, and since June, it's been able to continue making PPE in addition to its signature coats.

In the midst of the COVID-19 crisis and calls for racial justice, Empowerment Plan's has embarked on its latest venture to give back. The company has a collaboration with local retailer Brightly Twisted on a new collection of tie-dye shirts, with 20% of the proceeds going to the Detroit Justice Center up until the end of August. The goal was to use their already in-stock inventory for the collab, with the hope to design new merch for the cause this fall.

"The energy in Detroit is contagious," says George. "Once you’re down here, you want to be a part of it. To me, it doesn't matter what business you're in, you’re working toward a common goal and that's for a better, brighter Detroit."