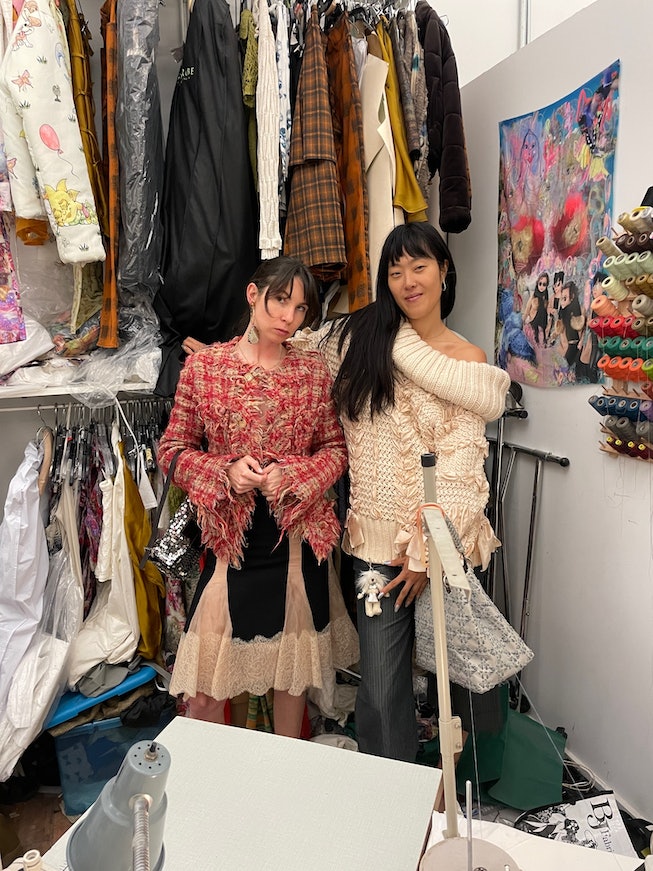 Courtesy of The RealReal

After the New York label Gauntlett Cheng launched in 2014, designers Esther Gauntlett and Jenny Cheng swiftly established their label as one that could convey emotion. First meeting while both interning at Eckhaus Latta in 2014, their first “thrown together” collection was under the name Moses Gauntlett Cheng with David Moses, growing “pretty organically” from there. With clothing that subliminally explores the emotional state of both of the designers, they’re known for touching on themes of work life, financial anxiety, sexuality, a sense of home, desire, frustration, and nostalgia throughout their work. Now, the designer duo is taking us on a different emotional path — curated vintage.

Esther Gauntlett and Jenny Cheng have teamed up with the vintage designer reseller platform The RealReal for a holiday edit that’s as personal as their own brand, Gauntlett Cheng. The partnership follows their return to the runway after a three-year hiatus, releasing a highly-anticipated SS23 collection at New York Fashion Week in September. The collection titled, “When It Feels Right, How Could It Be Wrong,” embodies a city in constant transition with fanciful (often transparent clothing) that reject notions of dressing with appropriateness. Tying in their relationship to the designer reseller, the models shoes for the show were all vintage designer items from The RealReal.

Esther and Jenny’s shoppable edit consists of approximately 100 pieces of RTW, jewelry, shoes, and handbags. Both steering clear of adhering to trends, the designers instead focus on providing a variety of statement pieces, from vintage designers like Dior, Alexander McQueen, Roberto Cavalli, Chopova Lowena, and Prada.

Ahead of their drop, which is now live on The RealReal, we spoke to the Gauntlett Cheng founders about party dressing and discovering rare vintage finds.

How do you both incorporate vintage pieces into your personal style?

Esther Gauntlett: I would say 75% of my wardrobe is vintage. There are so many incredible clothes out there and so many designers I love that aren’t making clothes anymore, so you can cast your net a lot wider.

Jenny Cheng: Most of my wardrobe is second-hand and vintage.

What's a vintage piece you’ve found that you can't live without?

EG: I have a 1996 Prada coat that makes me feel like a lady, even worn over sweatpants.

JC: I found an SS98 Versace dress on TRR. It's a really thin wool plaid dress cut on the bias and I love it so much even though sometimes it's too small for me.

What are your favorite vintage designers to search for right now? Any tips for finding vintage pieces online?

EG: I love finding old Tom Ford pieces and especially old Prada. Patience is a virtue when shopping online for it!

JC: It's like a full-time job looking for vintage pieces online now. I remember being able to find Gaultier pieces in Beacon's Closet in 2014. I love looking for older Versace, McQueen, Tom Ford, and Galliano.

We're heading into the holiday season, do you have any party dressing styling tips?

EG: Layers and sparkles. Have a little more fun with the accessories if you have to rug up.

JC: Get your nails done and add some sparkle!

In the past couple of years, we've seen a surge in the popularity of vintage brands like Roberto Cavalli and Gaultier. What are your vintage trend predictions for 2023?

EG: Old McQueen. There are some amazing pieces on The RealReal right now.