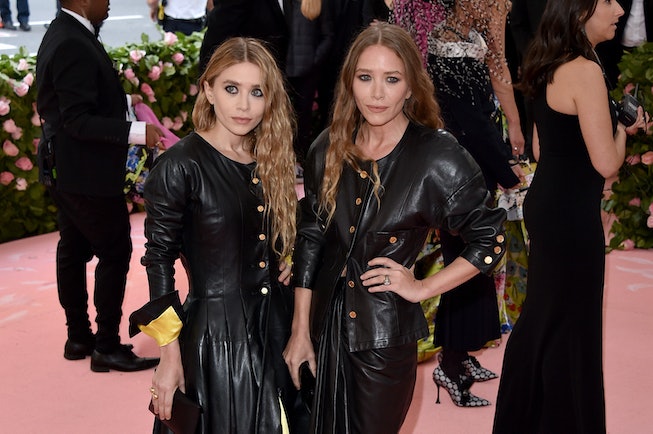 Mary-Kate and Ashley Olsen were fashion pioneers well before they started their own high-end label The Row in 2006 (lest we forget their first fashion line, sold at Walmart). While the Met Gala is now known as the Oscars of Fashion, minus the awards, the event has been a yearly happening since 1948. No, the twin sisters haven't been going since the '40s, but they've have been frequent Met Gala guests since the mid-aughts. Before there was Rihanna and Kim Kardashian West, there was Mary-Kate and Ashley Olsen.

They have been on the coveted guest list since 2005, and their 15-year sartorial evolution is well-documented in the annals of Getty Images and weird Vogue videos. From their NYU-attending, Starbucks-wielding, hobo-chic days to their current style of high fashion vintage, the two have come a long way, with an apparent pit stop to the tanning salon in 2006. (It was 2006!)

Save for one year of reprieve in 2010 and one absence by Ashley in 2012, the Olsens have been a red carpet staple at the annual fashion event. While there may be no Met Gala on May 4 this year, it's safe to assume Mary-Kate and Ashley would have been there, come hell or high water. To honor their dedication, we've rounded up all their Met Gala looks, below.

Still in their New York Minute hairstyle era, the two made their first Met Gala appearance in 2005 for the The House of Chanel exhibit. Despite the theme, Ashley opted for an Oscar de la Renta gown while Mary-Kate wore vintage.

Mary-Kate and Ashley wore Badgley Mischka to the 2006 Met Gala, dubbed AngloMania. While some attendees opted for their best tartan plaid and British punk ensembles, the two arrived in unexpectedly sophisticated (and tanned) looks.

"These were custom looks, so we went through fabrics together and they gave us an idea of what they liked," designers Mark Badgley and James Mischka told Page Six in 2018. "This was around the time that they were always photographed running around with their Starbucks, so it was fun to glam them up."

Ashley went in a different direction, wearing a simple white gown with a mink stole.

In 2008, which welcomed the Costume Institute's Superheroes: Fashion and Fantasy exhibition, Mary-Kate and Ashley were accompanied by Christian Louboutin on the Met Gala red carpet, wearing gowns designed by Diane Von Furstenberg.

The 2009 Met Gala celebrated The Model As Muse, with co-hosts Anna Wintour, Kate Moss, and Justin Timberlake. Showing off her love for vintage again, Mary-Kate dug up a silver gown by Christian Lacroix.

Ashley chose to show off her designer skills, wearing a white gown with long sleeves from their label The Row.

After a short red carpet hiatus in 2010, the Olsens were back again for the 2011 Met Gala for Alexander McQueen: Savage Beauty. Mary-Kate matched the carpet in a bright red gown by Givenchy.

On the other end of the sartorial spectrum, Ashley opted for a structured Dior gown with billowing sleeves.

In 2012 for the Costume Institute's Schiaparelli and Prada: Impossible Conversations, Mary Kate attended the Met Gala red carpet solo, wearing a gown by The Row.

The pair arrived on the red carpet together in 2014 for the Met Gala and Charles James: Beyond Fashion exhibition, grabbing vintage looks from Chanel and Gianfranco Ferré from the Lily et Cie boutique in Beverly Hills.

At the 2015 Met Gala, which celebrated the opening of the Costume Institute's China: Through the Looking Glass, the two coordinated in vintage Dior by John Galliano gowns.

Mary-Kate and Ashley weren't exactly on-theme for the 2016 Manus x Machina exhibit, but they stayed true to form in black and neutral floor-sweeping looks.

To honor Comme des Garçons's Rei Kawakubo at 2017 Met Gala, they dabbled with color and loads of texture — fur, lace, beading, and more.

These sisters love a flowy moment. For 2018 the Met Gala and Heavenly Bodies exhibit, Ashely wore a metallic Paco Rabanne gown while Mary-Kate wore a black gown from The Row.

In an unexpected twist, the Mary-Kate and Ashley wore head-to-toe leather gowns to the 2019 Met Gala's Camp: Notes on Fashion. It might not have been everyone's interpretation of camp, but it was camp to them.

NEXT UP
Culture
The Cutest Couples At The 2023 Grammys
Culture
Caroline Polachek In KNWLS & More Party Photos You Missed
Fashion
Olivia Rodrigo Wore A Sheer Slip Dress To The 2023 Grammys
fashion
All Of The Sexy, Sparkly Outfits From The 2023 Grammys Afterparty
Style + Culture, delivered straight to your inbox.