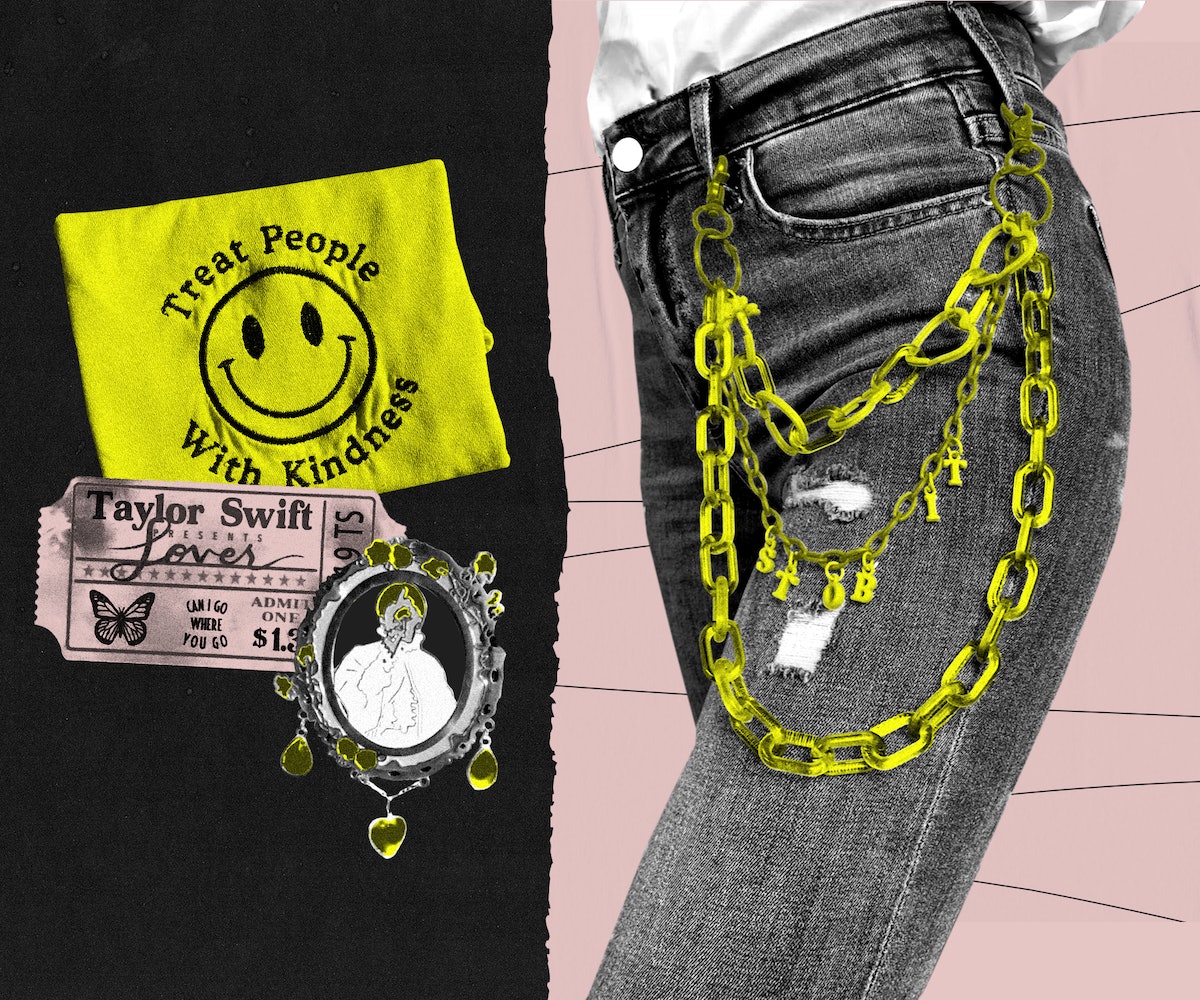 Fans are always finding new ways to stay connected to their favorite musicians, so the rise in fan-made merch — from K-pop groups to some of today’s biggest, chart-topping names — should come as no surprise. For those who want to show their support beyond just official merchandise, there’s likely a fan shop selling exactly what you’re looking for, often offering products with a lot more thought and care.

Emily Hering, a 23-year-old from California, was furloughed from her job as a barista at the start of March 2020. With the extra time on her hands, she played around with Adobe Illustrator and released the blue Harry Styles “Love On Tour” ticket stub design she had been working on before the pandemic hit. That’s when her Etsy shop, Sunfish Press, really took off. “The reaction I saw from that initial sticker brought me so much joy and motivation to create stuff not only for myself but also for others,” says Hering, who has since created 60-plus sticker designs and branched out into apparel and accessories, from crewneck sweatshirts to Crocs charms.

So far, Hering has made more than 19,000 sales through her Etsy shop, which offers a mix of products for Harry Styles, One Direction, and Taylor Swift fans. When it comes to inspiration, she often references a TikTok about the lackluster designs of official licensed merch.

“Sometimes I want to rep an artist, but I don’t want people to look at the shirt or sticker and know immediately, ‘Oh, she’s a Taylor stan.’ Tiny details only other fans would know or appreciate is what makes merch special,” she says. Take, for example, the “Lover” sticker, which Hering designed with a tie-dye background, a butterfly, song lyrics, the release date as the ticket number, and a $1.30 price. A Swiftie since childhood, Hering tries to channel each of Swift’s eras through her designs.

While fan-made merch seems more appealing coming from a true supporter of the artist, legal issues do spring up for those who are turning their wares into a business. “Thankfully, Taylor’s legal team has been generally pretty quiet so far, but Harry Styles’ team is notorious for scanning Etsy and flagging listings left and right,” explains Hering. “It’s definitely taught me to be crafty with titles, descriptions, and even the tags for an item.” She opened up her own website for Sunfish Press in May, which she hopes will curb some of these issues.

Sara, 22, and Mari, 19, Olson from Stevens Point, Wisconsin, started their shop, KiwiCrossings, when the boredom of quarantining during the pandemic hit them in May 2020. What initially started as a creative outlet has now turned into a full-time gig for the two sisters. Their shop offers merch for their favorite band One Direction, with a sweet spot for solo star Styles.

“For the past 10 years, One Direction has brought millions of people so much joy, and we hope that our art helps carry on even an ounce of that happiness and excitement for everyone that comes across our shop,” they share with NYLON in an email. KiwiCrossings sells mostly embroidered apparel and accessories that they create using a machine their mom bought for them about seven years ago.

According to the Olsons, there’s a lot of practicality behind starting their own merch business, despite the artists’ own options that are available on the market. From their personal experiences, these items can be extremely expensive, too simple in design, and can often take months to arrive. “We wanted to create unique and fun designs that were attainable for all fans,” they note. “Also, we think that other fans choose to support our small business because they know they’re supporting young artists and that their order is made with love and extra personal touches.”

Azalea, a 17-year-old student from Oxford, England, started her Etsy shop, lileuphoriaco, three years ago to combine her passions for both drawing and K-pop supergroup BTS. “I wanted to create merch that doesn’t scream BTS in everyone’s faces and that you can wear daily while feeling cute,” she explains. “Official merch tends to be so much more expensive and sometimes doesn't even ship to half the world. I decided to create my own merch because I know what we as fans would like to see and I wanted to make more practical and aesthetic pieces.”

Shoppers can choose from enamel pins in mystery grab bags or more fashion-forward items, like a rainbow-colored PVC bag inspired by J-Hope or different pants chains that highlight each BTS member. Azalea also launched a special collection inspired by the group’s Map of the Soul: 7 album, which has songs and lyrics written on a dress and shirt.

Similarly to Hering with Sunfish Press, Azalea believes legal issues are a growing concern with fan-made merch shops being taken down due to copyright infringement. “It’s all about wording and how far you use the word ‘inspired,’” she says. “I guess there’s a really fine line between being inspired by an artist and blatantly copying their work.” According to an Instagram post from Azalea on April 21, one of her items (the aforementioned MOTS shirt) was taken down from Etsy. Still, this hasn’t stopped her from combining her love for BTS and fashion design. “I make merch because I was inspired by the messages and substance in their music,” she says.

Setbacks aside, fan-made merch is on the rise and for good reason. “There’s so much inspiration to be drawn from the music, the aesthetics, the lyrics, almost everything they do,” says Hering. Not only do these businesses know their favorite artists and their work best, but they’re meeting the demands of fandoms with pieces that are, ultimately, special and unique. What’s a better homage than that?