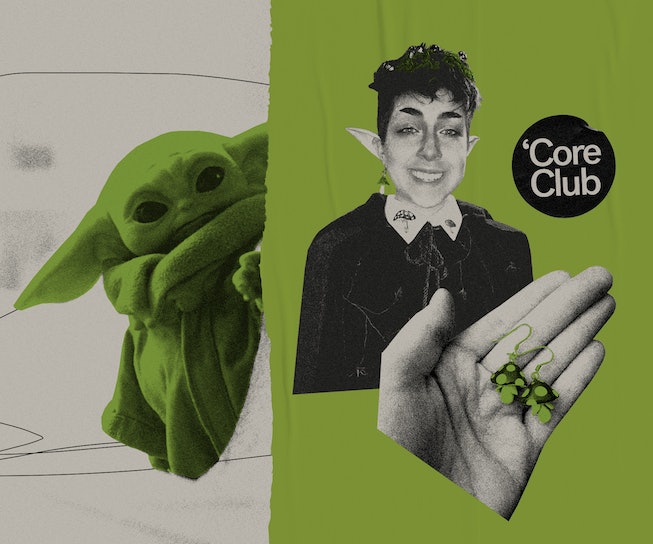 Whether it's a fashion trend on TikTok or a certain style taking over Instagram, internet aesthetics are always changing online. Our series 'Core Club breaks down the looks that you're starting to see a lot on social media and highlights the people and brands channeling it best. Next up: goblincore.

Few aesthetics speak to the nature of 2020 like goblincore: Characterized by the seemingly grotesque (think: mud, snails, and fungi), goblincore is rooted in a collective fantasy dreamscape during a time when we'd rather be anywhere but our current reality. While the trend may have hit its peak during quarantine — Tumblr, for example, reported an overall engagement spike of 166% in March — the aesthetic itself is not necessarily a new one.

Rachel Weingarten, a fashion historian and expert, describes goblincore as a return to our roots. "We're stuck home. We're living through scary times. We're armed with little more than our WiFi and our imagination. So we look for the accessible magic in our lives; sometimes that's a softening of what we grew up with, and sometimes it involves translating the positive effects of cosplay into something we understand here and now," she tells NYLON.

"If Taylor Swift is the floral-crowned goddess of cottagecore, then Baby Yoda could be the poster child for the lovable aspects of goblincore."

"If Taylor Swift is the floral-crowned goddess of cottagecore, then Baby Yoda could be the poster child for the lovable aspects of goblincore," says Weingarten. "We're delving into the less pretty side of things and sometimes finding it adorable. We've evolved from dragoncore and the trajectory that took us from Dungeons and Dragons to Game of Thrones to someplace gritty and real."

It's true that cottagecore represented a return to simplicity via open spaces and banana bread, but goblincore is a retreat to another world, one that is less concerned about being as stylized. A deep dive into the tag on Instagram (203,948 posts) and TikTok (153M views) will unearth statement pieces like dark, earthy colors; witchy, flowy fabrics; and extremely cozy items. Accessories include talismans like pins, patches, and charms; miniature trinkets as jewelry; and anything with moss and mushrooms.

Amanda Brennan, Tumblr's trend expert, says goblincore finds beauty in traditionally undesirable aspects of nature like the dirt the mushrooms sprout from, the earthworms that call that soil home, and the crows that feed those earthworms to their babies. "It's the love of acquiring and collecting shiny objects that you can squirrel away," she tells NYLON.

Elements of goblincore have been mainstream for some time, though it's certainly picked up traction over the last few months. Weingarten points to beauty and health practices like mud masks and reishi tea (a mushroom cure) that have quickly expanded to snail beauty treatments and beyond. Goblincore hits the sweet spot of being familiar enough for brave new explorers to venture into the aesthetic and just the right amount of mystic to be an escape. Or as Weingarten puts it: Goblincore is simply taking what's in front of us — or in the recesses of our minds — and making it something desirable.

Parker Chandler, an early pioneer of the aesthetic, says that goblincore is a celebration and embrace of comfort. "You wear odd socks, have messy hair, get muddy on a walk — these things are all celebrated within the goblincore aesthetic. It encourages those involved to care less about maintaining the beauty standards expected by society and to create your own," he tells NYLON.

In the mythical land of goblincore, there are no rules. What might have been outcast in regular life only adds to the charm of an internet craze that is defined by an open acceptance of everything and anything. It's easy to understand why people are so charmed by the lawless nature of goblincore where anything (Elf ears? Full body paint? Mystery skulls? Sure!) goes. Unlike real life, goblincore subscribes to no "norm" and roots itself in the idea that what can be found in our fantasies is valid.

Chandler, whose wardrobe consists mainly of thrifted or secondhand "ugly" knitted jumpers, oversized dungarees, and vintage waistcoats ("I have very strong beliefs about fast fashion, and saving the planet is pretty goblincore if you ask me"), says that dressing like someone out of a fantasy novel makes him feel more empowered and connected to that around him.

It's akin to cosplay, a popular performance art and activity for fandoms, but not specific to one piece of media. With goblincore, anyone can dress up as a creature from the deepest depths of their fantastical daydreams and find refuge in surrealism. There is a certain kind of freedom that goblincore offers that no other aesthetic does, and it's the very belief that the abnormal can be navigated and even beloved. And if 2020 has done anything, it's reshaped our ideas of what normal is.

Fashion, as an art, is only ever a reflection of the world it inhabits. For every "clean" aesthetic, there will come an opposite and equal rival to usurp its place. Goblincore, like what dark academia was to elite prep school chic, did exactly that. "It's a coping mechanism. It's the Krampus of pop culture. For every Santa Claus who is jolly and generous, we have a Krampus who is there on the periphery waiting to take it all away and punish those who misbehave," says Weingarten. "By owning goblincore, we attempt to tame our demons and even hug them for a while. Folklore and fairytales are full of the bright and the dark. Goblincore is just a modern interpretation of what we grew up with, only instead of being scared of the things hiding under our beds at night, we embrace them."

NEXT UP
Fashion
The Mini Skirt Was The Must-Have Celebrity Fashion Item Of 2022
Culture
On The List (With Melissa Rich): Is The Party Venue Recession Upon Us?
Fashion
Coach Reissues Y2K Favorite Demi Bag
Culture
An Exhaustive Breakdown Of The Balenciaga Controversy