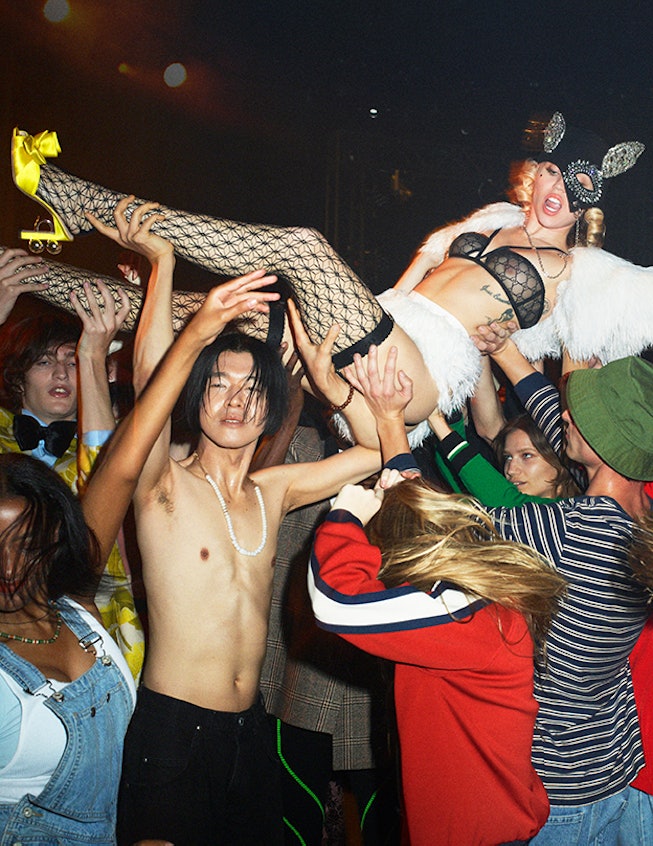 Following its celebrity-filled runway show back in November 2021, Gucci’s official Spring 2022 campaign for its Love Parade collection has finally arrived.

On Monday, Feb. 21, Gucci unveiled its latest campaign inspired by the glitz and glam of Hollywood Boulevard and spotlights the fashion house’s recent collection worn by its star-studded model cast. The celebrity cameos continue for its newly-released images and video, as well, with surprise appearances from Miley Cyrus, Snoop Dogg, Beanie Feldstein, Jared Leto, and Squid Game’s Lee Jung-jae — just to name a few.

Lensed by Mert Alas and Marcus Piggott, the Gucci Love Parade campaign follows the cast — wearing maximalist silhouettes with a ‘70s-inspired feel — as they party and dine hard at a restaurant, eating cakes, sipping on drinks, and dancing in cowboy hats. Throughout the campaign, we see Feldstein in a lilac satin dress topped with a diamond tiara and Cyrus rocking a white faux fur set paired with monogrammed lace and a bedazzled face mask, while Snoop Dogg and Lee are in statement suits.

For creative director Alessandro Michele, the collection was inspired by his upbringing on Old Hollywood films and the costume designers behind it all. “I thought about how my mother raised me as a devout worshipper of beauty,” Michele said in an official statement about his campaign. “About the gift of dreaming, which I cannot go without. About the aura of cinema, which generates mythologies. This is why I chose Hollywood Boulevard.

See more from the #GucciLoveParade campaign, below.