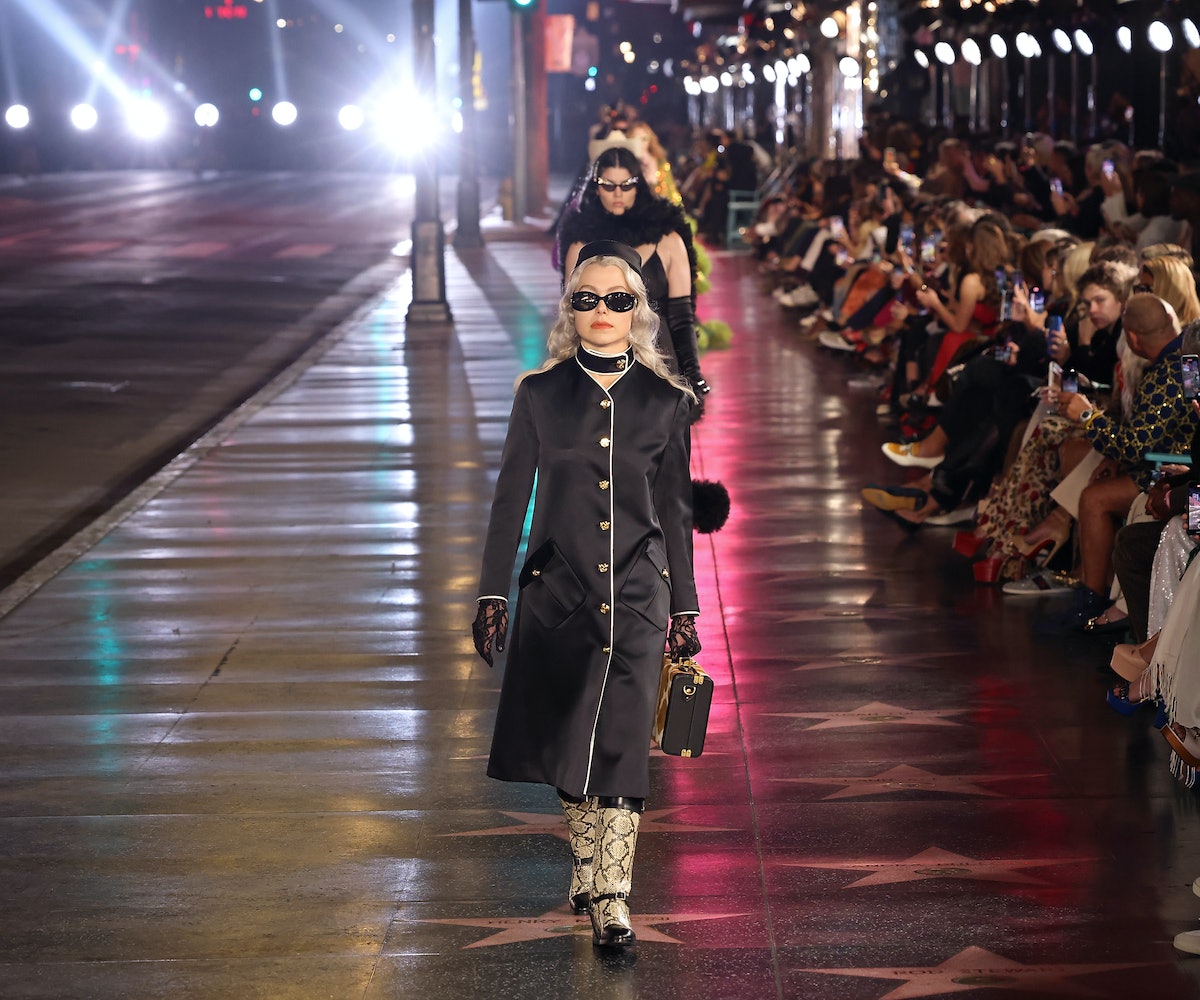 It’s been nearly two years since Gucci held an in-person runway show and on Tuesday, Nov. 2, the Italian fashion house debuted its Spring 2022 collection with Gucci Love Parade in Los Angeles, dedicated to and inspired by Hollywood.

After deciding to downsize its original fashion calendar to only two shows per year in 2020, Gucci’s creative director Alessandro Michele has been experimenting with the concept of presenting a brand new collection in new ways. For past seasons, he’s hosted a multi-day film and fashion festival called Guccifest, debuted a collection with a 12-hour livestream that captured its campaign shoot, and hacked Balenciaga’s designs. Michele had plans to show in the U.S. back in early 2020, slated for that May in San Francisco, but it was eventually canceled. More than one year later, Michele and his team finally touched down on the west coast, making its highly anticipated return to the runway.

Gucci Love Parade, in all its Hollywood-glam glory, seemed to have made up for lost time and so much more. Ahead, we break down the best and most memorable moments from Gucci’s Spring 2022 runway show, from the celebrity cameos on the catwalk to the variety of references within each look. Read on for more.

Gucci shut down an entire block of Hollywood Boulevard to showcase its latest collection. The exact location had plenty of ties and references to the city’s long storied history in cinema, from the tourist hotspot Walk of Fame serving as the models’ runway to the famous, Disney-owned El Capitan Theatre as the show’s backdrop. “Hollywood is, after all, a Greek temple populated by pagan divinities,” wrote Michele in the show notes for Gucci Love Parade. “Here, actors and actresses are acknowledged as heroes of the myth; hybrid creatures with the power to hold divine transcendence and mortal existence at the same time, both the imaginary and the real.”

The show’s ultimate surprise was a cameo from not one, but nearly a dozen celebrities who modeled the Spring 2022 collection. St. Vincent was the first celebrity to grace the catwalk that night, while Phoebe Bridgers made her runway debut (with boyfriend Paul Mescal sitting on the sidelines to witness the moment), along with Macaulay Culkin, Jodie Turner-Smith, Miranda July, Kodi Smit-McPhee, and Jared Leto, who’s set to star in the upcoming film House of Gucci. Broadway performer Jeremy Pope, musical artists Steve Lacy and Hayden Pedigo, activist Janaya Khan, and Grace Johnson (sister to Dakota Johnson) also walked for the Italian fashion house.

Gucci Love Parade: The Front Row Was Just As Packed With Famous Faces

Of course, the show’s front row was stacked with celebrity names, as well, including famous friends to the brand Billie Eilish, Dakota Johnson, and Miley Cyrus. Italian rock band and 2021 Eurovision winners Måneskin also snagged an invite to the show, in addition to Lizzo, Tracee Ellis Ross, Serena Williams, Natasha Lyonne, and more. Gwyneth Paltrow arrived in a red velvet suit that fans may recognize as the Tom Ford for Gucci look that she wore at the 1996 MTV VMAs. (Though, her look was an updated version from Gucci’s 100th anniversary collection.) Sadly, longtime Gucci muse Harry Styles, who’s currently on tour, couldn’t make a pitstop to support his pal Michele, but the singer’s girlfriend Olivia Wilde made an appearance instead.

Michele has been fascinated by Hollywood since he was a child. His mom used to work in the film industry and often told him stories about Marilyn Monroe, Rita Hayworth, Veronica Lake, and other screen sirens of the past. That interest stuck with him while he studied costume design and throughout his maximalism-forward, vintage-leaning tenure at Gucci.

Now, his latest collection focuses solely on Hollywood’s Golden Age-era aesthetic, with dreamy evening gowns and ‘70s-inspired statement suits that pay homage to old films and the costume designers who were behind them, as well as fishnet tights, headpieces (a tiara!), loofa-like stoles, and faux-fur coats to finish each look.

“It has been an incredible place where fashion had a peculiar space,” Michele told a group of press after the show about the style of L.A., a city he’s been visiting more frequently over the past seven years. “It was fashion as a need. There was no fashion as intention and it was fascinating.” The aesthetic, known these days to mostly include activewear and plenty of designer logos — a pair of leggings is acceptable for pilates class, a quick trip to Erewhon, and dinner on a hotel rooftop — trickled into Michele’s designs, including matching athleisure sets and bike shorts.

American westernwear was also a source of inspiration, especially the cowboy hat, which topped a majority of looks on the runway. “I used [the cowboy hat] as a seductive object, an object of liberation,” explained Michele, whose reference point was the accessory’s symbolism within queer culture, gay clubs, and discos. “They moved from the western world and now they’re everywhere… It’s a very complex hat to make.”

Gucci Love Parade: The Accessories Are Going To Be Everywhere Come Spring 2022

While most of the collection’s evening gowns and suits will get plenty of play on the red carpet for future awards shows, film premieres, and major celebrity appearances, Gucci’s newest accessories are bound to be a hit among us regular ol’ people. The very first look’s grommet-studded black handbag and crystal-adorned sunglasses will likely grace the street style crowd at fashion month, while Gucci-emblazoned dad caps and chunky wraparound frames could easily blend in with L.A.’s trendiest residents. And if you’re entertained by Michele’s often-referenced subject of erotica, then perhaps you’re daring enough to sport a pair of latex gloves, a sex-toy-inspired necklace, or star-shaped pasties next spring.