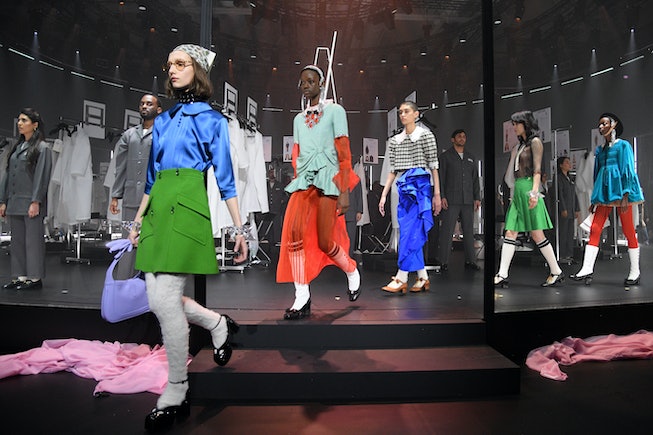 Editor’s Note: This post has been updated from its original version to include more details about Gucci’s runway show in Los Angeles.

Alessandro Michele is finally bringing Gucci to California. After COVID caused the brand to cancel its Cruise 2021 show in San Francisco last year, Gucci has announced that it will be holding its next fashion show in Los Angeles this fall.

The upcoming show, which will debut a new collection titled “Gucci Love Parade,” will be held on Hollywood Boulevard “in front of the TCL Chinese Theatre,” according to WWD, on Tuesday, Nov. 2, just days before the 10th annual Gucci-sponsored LACMA Art+Film Gala in the city. And considering the luxury brand’s latest campaign, featuring a celebrity cast inspired by the late-night talk show, we have a feeling the upcoming event will boast a star-studded front row. (Fingers crossed for Billie Eilish, Harry Styles, and Phoebe Bridgers sitting next to each other.)

“I love to come to L.A. because it’s one of the most inspiring places because there are no rules,” Michele told The Hollywood Reporter in 2016. “I have a lot of friends here — honestly, more than in Rome. It’s like family. Here in L.A., people really open their houses in an easy way, nothing too complicated. You can go in your flip-flops.”

Gucci will also be supporting the city by offering a donation through its Changemakers program, powered by Gucci Equilibrium, to help address homelessness and mental health.

Last May, Michele announced that he would be changing operations, forgoing the standard fashion calendar and presenting only two collections per year. Last month he unveiled the first for 2021, sharing his Aria collection with a short film.

“I will abandon the worn-out ritual of seasonalities and shows to regain a new cadence, closer to my expressive call,” he said. “We will meet just twice a year, to share the chapters of a new story. Irregular, joyful and absolutely free chapters, which will be written blending rules and genres, feeding on new spaces, linguistic codes and communication platforms.”