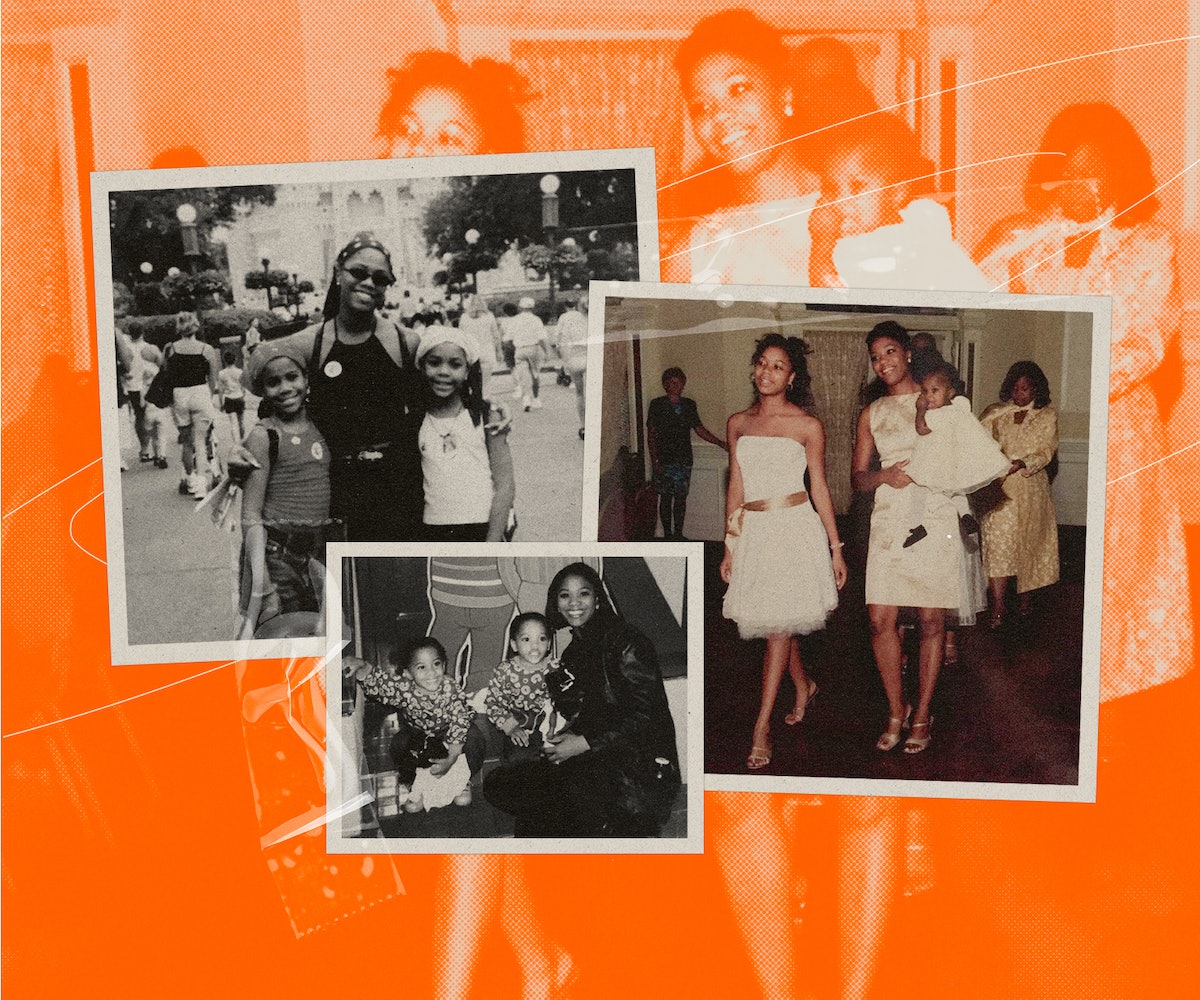 I was about 13 years old when I realized my mother didn’t dress like other mothers. This moment came one morning when she was stepping out of our home in the suburbs of Central Florida to head to work. Our neighbor and another mom, Anita, exclaimed: “Kim, you look like a clown!” This was all she could conjure as a response to a white suit my mom was wearing that was emblazoned with a polka-dot print. My mom took the outburst in stride, laughing it off. She then got into her car and drove away. I overheard this interaction as my twin sister and I walked to our bus stop at the front of our neighborhood.

I didn’t think much of it back then, but now this memory sticks out to me as a defining moment. An instance of many in which my mom expressed herself through her unique style — a notion that I would lean into years later in college.

As a kid, I often admired the pantsuits she would pair with heels to head to her job at the corporate YMCA office, and later as a manager at a community center in downtown Orlando. Suits were her go-to, but she’d also opt for more casual pieces — jeans, a simple blouse, and sneakers — when she was leading group counseling sessions for a non-profit she’d created for Black teens. There were also numerous opportunities for creativity. During those moments she could be found wearing a wide-sleeved dress in bright pink, teal, or Kelly green. No matter where she going, she added her own personal touch to each outfit. Whether it be a bright red lipstick, a necklace that was a conversation starter, or earrings that stood out, my mother never met an accessory or color she didn’t try out.

A daughter of a pastor, originally from Great Neck in Long Island, my mom was a track athlete for most of her life. She was All-American at her predominantly white high school, and also ran in college on a full track scholarship at Adelphi University where she received her MSW. I believe track is where she gained her confidence. Aside from being athletic, she grew into her beloved relationship with clothes in her early 20s. During those years, she shifted from wearing what my grandmother deemed acceptable to figuring out her own wardrobe. In the early ‘80s, she experimented with biker shorts, headbands, crop tops, and T-shirt dresses.

By 27, she was married, working as a probation officer, living in Florida with her then-husband (my father) and had given birth to twin daughters, Reneé and me. Suits became a part of her wardrobe during her early years of motherhood and while she began working as a neighborhood coordinator at a community center in Ivey Lane. Depending on what setting, she would go from being impeccably dressed to a more toned-down outfit. She was a fashion chameleon, a tactic that helped her relate to who she was rubbing shoulders with; it also allowed her to maneuver in spaces where she might have been the only Black woman in the room.

I’ve inherited this practice from my mom. Early in my career, my personal style was inspired by my environments, but also the editors and writers — Marjon Carlos, Lindsay Peoples Wagner — who I admired and aspired to be.

My mother’s ability to create memorable looks also revealed itself during a wedding anniversary celebration for my grandparents in New York. Champagne gold and off-white were the party’s colors, so my mom wore a satin dress adorned with glittery flowers that fell right above her knees. She paired the dress with strappy gold-tone heels and large clip-on earrings. The entire look was fantastically chic. Even within strict dress-code guidelines, my mother still succeeded at presenting a stylish version of her most confident self.

Trips to consignment shops, Goodwill, and the mall were some of the ways my sister and I bonded with my mother, which led me to realize that brand new items, gently-worn selections, and vintage pieces were all equal. She fused these secondhand pickups into her kaleidoscopic wardrobe, a trait she inherited from my grandmother who still frequents thrift stores at 86 years old.

Even within strict dress-code guidelines, my mother still succeeded at presenting a stylish version of her most confident self.

My mom’s unwillingness to shy away from patterns, colors, and textures in her professional career gave me the confidence from a young age to do the same. As a middle schooler, I had an affinity for sneakers and bright colors. I would constantly seek out both and created outfits inspired by what I saw in magazines like Teen Vogue, Elle Girl, and NYLON. My love for fashion continued well into my teen years, and the passion was pivotal to me during college. By the time I’d moved to New York after graduation, my style was still evolving.

Equipped with the sartorial lessons I’d picked up from my mother, I became an unapologetic fashion chameleon just like her. My confidence was always at a high level since I wore clothes that made me feel my most creative. Her knack for experimentation pushed against the limitations that women in the suburbs often feel they need to bend to in order to be accepted. Fitting in was never a priority for my mother, and this also became my modus operandi. Years ago, I picked outfits that made me feel like the best version of myself for my fashion assistant roles and internships in New York City. Well into my career as a writer, I still do this, and I wouldn’t be able to if it weren’t for my mother.

In a world that often tries to stifle creativity of marginalized groups, I can proudly say I’m grateful that my mom didn’t allow naysayers and those who didn’t understand to dim her light. In return, I shine bright through my own personal style, too.

NEXT UP
Fashion
Target’s Future Collective Gets Buoyant With Gabriella Karefa-Johnson
Culture
The Cutest Couples At The 2023 Grammys
Fashion
Jenna Ortega Is The Face Of Adidas’ Newest Line
Fashion
Collina Strada & Vans Team Up For A Chiller-Friendly Collection
Style + Culture, delivered straight to your inbox.