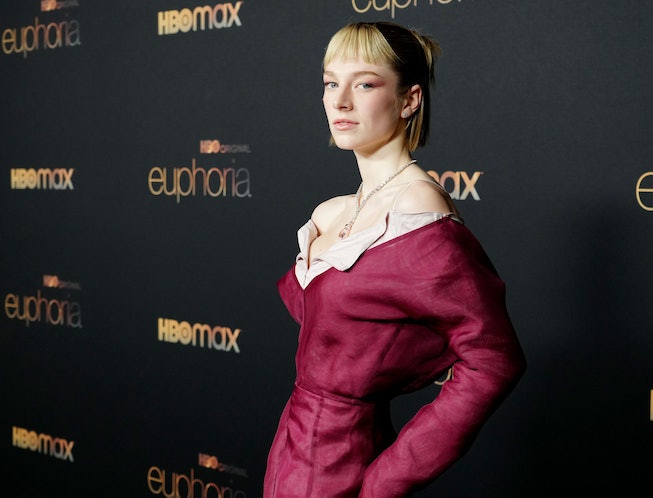 Schafer has always been a fashion darling, as she made her debut on the runway back in 2017, walking for brands like Dior, Miu Miu, Rick Owens, and Marc Jacobs, among many others. But since starring in HBO Max’s hit series Euphoria since 2019 — and the pandemic to follow shortly after — we haven’t seen much of the model-turned-actress on the catwalk IRL.

Schafer’s Gogo Graham look included a criss-cross black and white dress corseted ensemble which was styled with a pair of yellow sweatpants and a white puffer coat. The 23-year-old was also seen carrying a yellow teddy bear in her hand, along with a black choker and platform flip-flops as a finishing touch. Gogo Graham’s Fall 2022 collection is a nod to Studio Ghibli’s acclaimed ‘80s film Grave of the Fireflies and the Brooklyn-based designer’s Japanese roots.

In one of Schafer’s recent Instagram Stories, the actress shared her latest runway gig, captioning on one post from the show’s backstage with “The dolls are dolling.” Gogo Graham is Schafer’s first New York Fashion Week show since February 2019, when she walked for Coach’s Fall 2019 runway show. In March 2021, she made an appearance alongside Bella Hadid for Mugler’s Spring 2021 fashion film.

NEXT UP
Fashion
The Wildest Front-Row Looks From Couture Week In Paris
Fashion
Apple Martin Is A Chanel Girl Now
Fashion
Jenna Ortega Is The Face Of Adidas’ Newest Line
Fashion
Target’s Future Collective Gets Buoyant With Gabriella Karefa-Johnson
Style + Culture, delivered straight to your inbox.