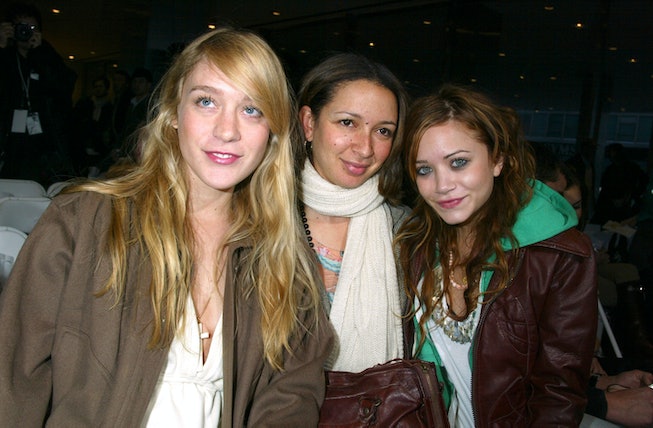 Imitation of Christ is back (again) after a lengthy hiatus, presenting a couture show in Los Angeles on July 4 called "Americans Not Allowed in Paris," two days before couture week in Paris officially started. The early-aughts fashion brand stayed true to its eco-conscious roots, with young artists using leftovers from their closets to create the pieces.

"We want to stay positive in a very challenging time in our country and the world. As artists, designers, and young people with our lives in front of us and currently on hold, we want to say something and to create," the brand said in an official statement. "Political in its poetry. We hope this goes beyond words and slogans. We hope you can see this and support a new generation of young creatives resurrecting this conceptual house."

Imitation of Christ was initially founded in 2000 by Tara Subkoff and Matthew Damhave, who appointed Chloë Sevigny as its first creative director. The brand was known for its use of upcycling vintage clothing and fabrics found and hand-sewn by Subkoff, as well as its cult following of celebrity fans including Mary-Kate Olsen and Scarlett Johansson. The brand went on hiatus in 2006, and by 2010, Subkoff had gained the rights back to her brand and relaunched for the first time with a runway show for its Spring 2011 collection under a new, shorter name: Imitation. In 2013, the brand went dark again.

Subkoff initially announced Imitation of Christ's 2020 comeback as early as May on Instagram. "I believe that what was so inspiration was not necessarily what we created, but our believe that things can be made more beautiful without waste," wrote Subkoff in her statement. "This ethos is now more relevant than ever as we clean out our closets during a quarantine." She also hired a new crew of creative directors — Lulu Syracuse, Jersey Bond, and Hudson Schaetzke — for the brand's next era.

"These are super charged creative young artists who had something to say and needed a platform during an incredibly challenging time on the planet; stuck at home and not able to do anything or see their friends or work or go to school. All the young artists — aged 17 to 19 — who worked on the show are also protesting for their futures and that their collaborative art work 'marries' their real social justice work with the the art honoring it," Subkoff told NYLON. "Lulu Syracuse was in utero in her mother's stomach at the first ever IOC show in April 2000. I've known her since she was born. She has always been inspired by IOC and fashion."

Bond is Syracuse's close friend and a young designer with family roots in streetwear. (Her father, James Bond, is the co-founder behind Undefeated.) Schaetzke is Bond's best friend, an artist, and a graphic designer.

Customers can shop the new collection through Imitation of Christ's Instagram. Some of the proceeds will go toward Direct Relief, Fridays For Future, and Black Lives Matter, with the remaining profits going toward the artists. Check out images from Imitation of Christ’s return show, below.