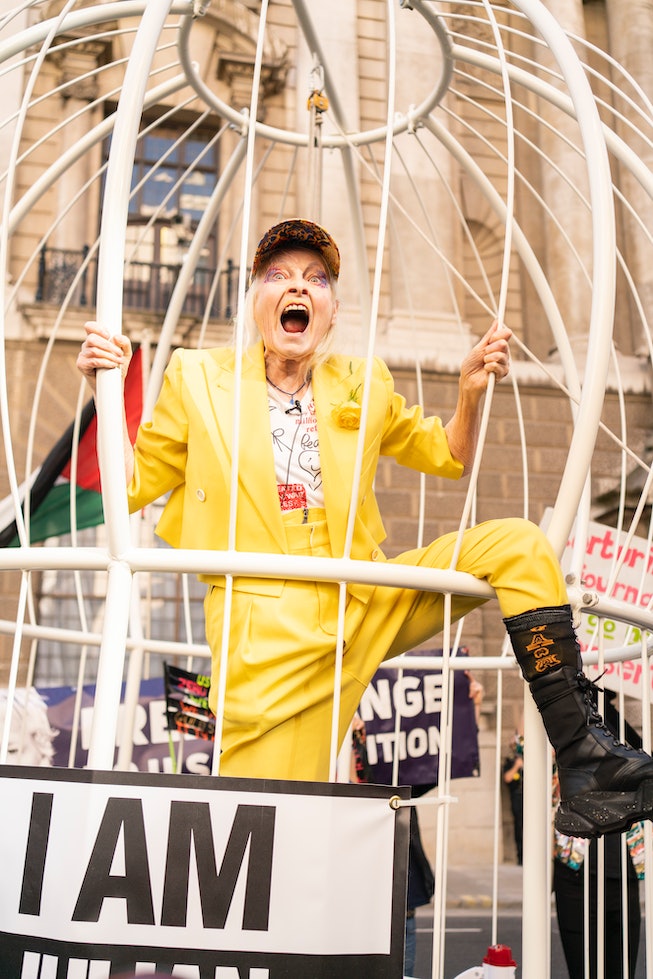 Vivienne Westwood is going back to her punk roots. The 79-year-old designer attended a protest against Julian Assange's extradition to the United States while hanging 10 feet above the ground in a giant birdcage.

"Julian Assange is the canary in the cage, he has been trapped by a big net, taken out of the sun and shoved in a cage," Westwood told reporters on Tuesday. "For the rest of his life he will become a symbol of what happens to you if you dare to expose the truth. Telling the truth is not a crime."

Assange is currently at Belmarsh Prison in London, but has an extradition hearing this September. If he is extradited to the United States, the Wikileaks founder will be tried for conspiring to hack into military databases and publishing information about the Iraq and Afghanistan wars.

Westwood broke her 16-week isolation period for the protest, where she wore a bright yellow suit (inspired by a canary), colorful eye makeup to match her mat, and shouted through a megaphone.

"There's no time to spare now whatsoever," she said. "If Julian gets sent to America, it is the worst thing that could happen in the world for justice and freedom of speech. This could happen to every journalist."

See Westwood speaking to reporters in the video, below.