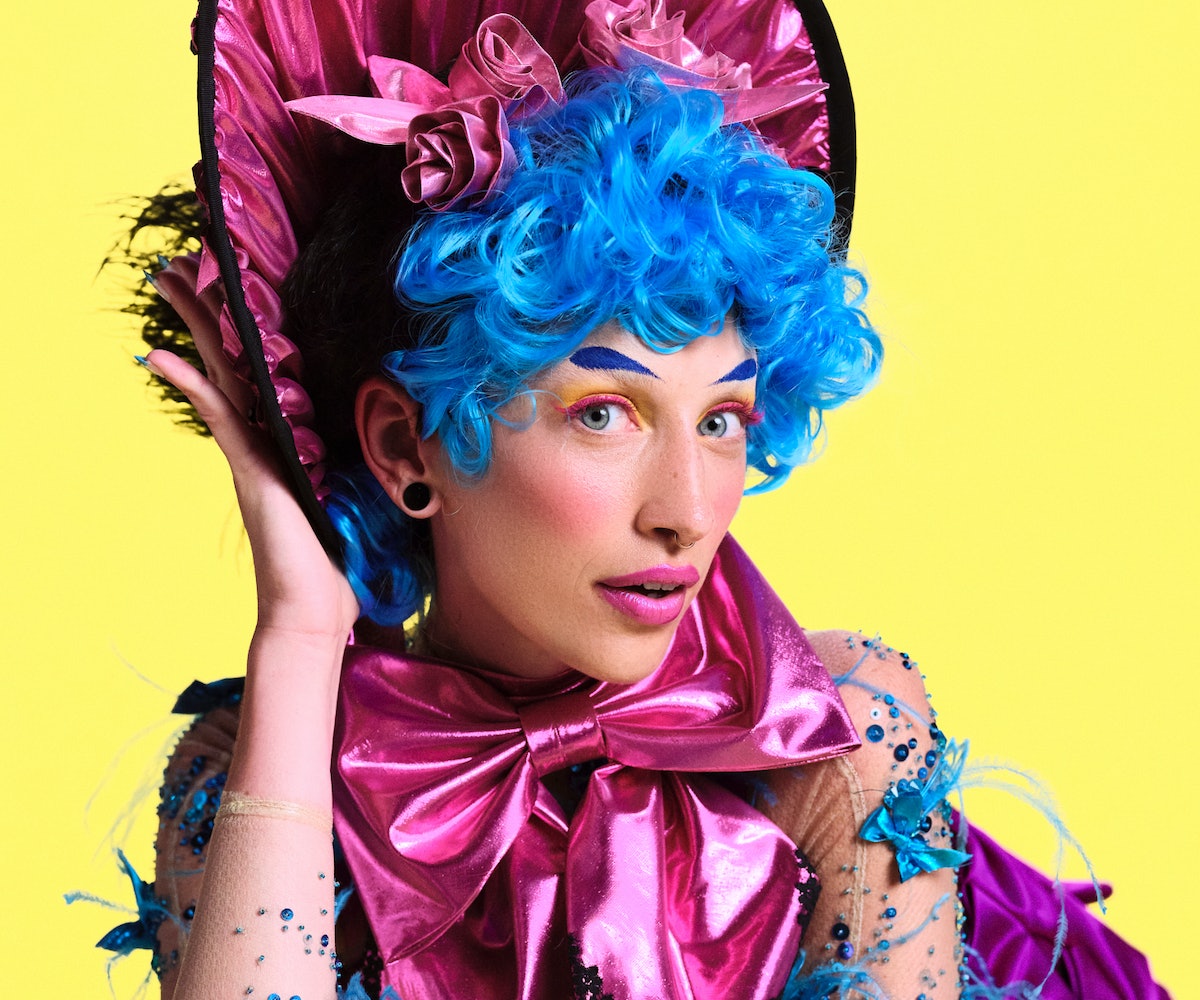 Jackson Wiederhoeft is originally from Houston, Texas, but it's difficult to glean that from his work. His clothes are whimsical, romantic, and, most importantly, theatrical, spawned from a mind obsessed with storytelling and determined to create a full fantasy out of each garment.

"I didn't really see that much theater growing up or anything. I guess the little bit that I did see just kind of stuck in my mind," Wiederhoeft tells NYLON from his Brooklyn-based studio. "And then I feel like the theatrical thing really started to evolve, probably once I lived in New York. I actually used to work more in costume design, up until I got an internship with Thom Browne and I just stayed on the fashion track."

Wiederhoeft graduated from Parsons School of Design in 2016, having won Women's Designer of the Year from his thesis collection, which went on to live in magazines like CR Fashion Book, V Magazine, and Vogue Hommes. During school, he worked as a design intern at Thom Browne, leaving the company in 2019 as an associate designer to launch his own label, Wiederhoeft.

Since early 2020, the COVID-19 pandemic has upended the fashion industry from top to bottom. Even the biggest players have suffered financial losses and struggled to navigate their brands amid an ongoing global crisis. Wiederhoeft managed to summon a burst of creativity during quarantine and created a bridal collection by himself in his studio. The line of "truly fairy-tale wedding gowns" was well-received among fashion media.

The process of creating his current ready-to-wear collection was less seamless. After spending months in lockdown with no end in sight and a looming election, the importance of fashion seemed trivial at best.

"There was a couple of weeks where I didn't even want to do [this collection] because it does kind of feel like anything that's going into the world right now, as far as fashion work, is not super relevant in a way," says Wiederhoeft. "Then I realized one day that the best thing I could do for myself and my community was to do this collection because ultimately if I can make someone smile or make someone enjoy the work, even if it's just for a second, then the work is worth doing. Doing this collection was really hard, honestly, emotionally, just to get up every day and do it in the middle of this pandemic, but I knew it was therapeutic for myself and also for everyone involved, ultimately."

Like many designers, Wiederhoeft presented his Spring 2021 collection on the CFDA's virtual platform Runway360 on Tuesday in lieu of live, in-person runway shows and presentations. (Though, those have happened, as well.) He also released the looks in a rollout on Instagram, styling and creating content from the collection with how it would look on social media feeds in mind. While a mostly digital fashion week may not have been the first or second choice for big-name designers, a shift from in-person shows has leveled the playing field for young and new creatives.

The new collection, titled "Mother Goose and all Her Silly Little Friends," is a colorful rendition of children's nursery rhymes and the spectacle of theatre and dance. Wiederhoeft reimagined these storybook tales into a comic book, and dressed each classic character into their own Instagram-friendly, superhero-inspired uniforms. Little Bo Beep is covered in bows trimmed with lace and layered with tulle, while Little Miss Muffet is dressed in a bold green corset and matching shorts underneath a sheer purple robe. Quarantine loungewear this is most definitely not; each look is meant to stand out and catch your attention, even if it only takes place on-screen.

"Fashion shows are meant to be very exclusive, but now it's honestly, for me, really fun to be allowed to do things in a different way. I designed this collection for Instagram, basically knowing 90% of people are going to see it on Instagram. Every look I would design I'd be like, 'OK, this is what color background we're going to shoot it on to make sure it's really bright and pops on Instagram.' And it's fun to have a new parameter."

While Wiederhoeft has already accomplished what many designers hope to achieve in a lifetime, and during a pandemic, no less, his designs being worn by Lady Gaga during her "Stupid Love" music video stands out as a personal and professional highlight. Gaga's stylist and Wiederhoeft's former Parsons classmate Marta Del Rio had pulled looks from him before, but nothing had made the final cut until "Stupid Love."

"If high school me knew about this, he would literally just scream and jump out the window," he says. "It's funny how that worked out without me even really chasing it. It's all very dreams-coming-true or something."