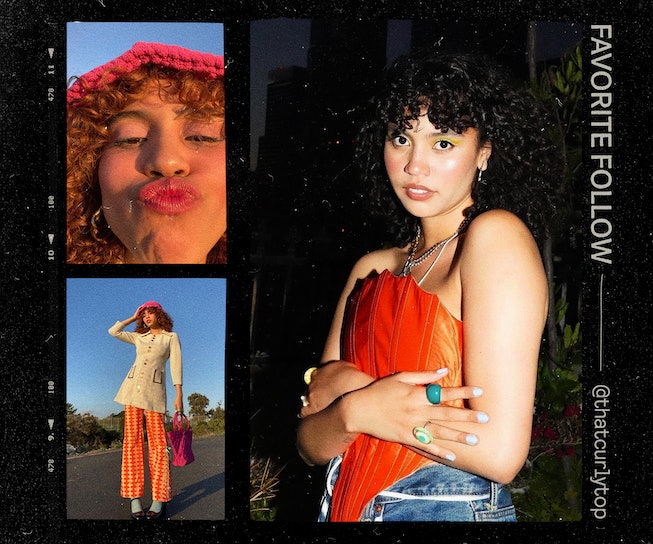 This is my first time meeting up with Jazmine Rogers, also known as @thatcurlytop on Instagram, in a gallery-café in Brooklyn. The 20-something-year-old content creator, known for her eccentric OOTDs, sustainably-minded lifestyle infographics, and signature bouncy curls, recently relocated to New York City from her hometown of San Diego when we spoke.

For Rogers, making the move was a drastic change and almost a culture shock — as many NYC transplants, myself included, experience — but she mentions that, ultimately, the high spirits of the city were something she’s been longing for.

“I feel like going in, I knew that the culture was going to be very different, so I was really anticipating that and really excited for that,” she says while sipping on a matcha latte. “I knew that the energy here was going to be high but I didn't realize what that look like. I feel like New York is full of simultaneous highs and lows, like you can have both your best and worst moments all at the same time. I feel that’s happened to me plenty of times already. Whereas in San Diego, it’s pretty neutral 24/7, which is nice but I feel like I’m a pretty high-energy person. It’s nice to have a city that finally matches that.”

Rogers, the internet’s favorite “sustainable baddie,” first garnered attention during the summer of 2020, where tensions were high during the first few months of COVID lockdowns and the height of the Black Lives Matter movement. While online, there was a push to support Black-owned businesses and creators, and as a Black and Mexican content creator, Rogers happened to be a part of that.

“It was kind of weird for me because I had been doing what I was doing for like five or six years before. Because of the Black Lives Matter movement that was happening in 2020, for example, people began to highlight Black and brown voices in the industry and I was one of those people that was brought to the forefront,” she says. “It was great to have my voice heard but it’s still kind of uncomfortable, because it’s like, ‘Oh, it took ‘Black Death’ in order for people to finally start listening to me and I still struggle with that to this day.”

Currently, Rogers has 100K followers on Instagram and counting, but she’s only just getting started. Along with having a loyal fanbase and getting recognition for her bubbly persona and maximalist style, she also has way more in store. Though the sustainable fashion industry can be bleak at times, her content is a much-needed beacon of hope.

Ahead, Jazmine Rogers, aka @ThatCurlyTop, spoke with NYLON about her thoughts on sustainability, being a content creator, and more.

On Having Eco-Friendly Habits

“I wasn't consciously aware of the eco-friendly habits I had until college, but because I grew up in a low-income household, there were a lot of inherently sustainable things I was doing anyway. I was thrifting, mending my clothes, and hardly ever shopping but it wasn’t until later in my journey that I realized, ‘Oh, I was actually being sustainable for a majority of my life and I didn’t even know it.’

But in college around 2015, I wanted to be a fashion merchandising major and while I was there, over the course of a year or so, I learned about how tragic the fashion industry is and I ignored it for like a year. But then it got to a point where I just couldn’t consciously move forward with being a part of the fashion industry and not be a part of change. Ever since then, I transformed into a fashion blog and started documenting my journey and sharing what I learned with others.

I think especially with my ethos, I’ve wanted to make an impact on the fashion industry but I've been doing it from afar. Now that I’m in New York, too, I’m in the heart of where that’s really happening and it feels so unreal. I’m just so grateful for the opportunity to be able to do that, and I wouldn’t be able to do this without my followers and it makes me really emotional to think that people believe in me, and that they also want to see the kind of change in the industry and support me being here.”

“I think people underestimate that there’s a lot more that goes into the job aside from just being gifted things or posting pretty pictures because I’ve been told that multiple times. It’s just like any freelancing job — you end up working more than ‘9-to-5’ hours, but it’s what I truly love to do. When it comes to the technical stuff, it feels like work at times, especially when I have weeks where I’m not in the mood to get dressed, but I have to be consistent and put myself out there. In a way, that pushes me to put myself out there on days when I don’t want to. Also, previous to the pandemic, I was hosting events and posting all of these resources on my platforms, so it’s nice to finally be compensated for it. There’s so much work than what people think. For instance, I’ll record something for a brand and it’ll take hours on end to edit for a 30-second video.”

On Toxic Positivity Vs. Hope For The Fashion Industry

“I think what people really like about my content is that it brings hope and joy into the space because I know sustainability can be really doom and gloom and just intense in general, but I want my content to bring people back to the reason why we are advocating for these changes because we all deserve a joyful future. I try to focus on finding the balance between being optimistic, as opposed to toxic positivity, because I know it’s easy to cross that line. I try to show that yes, there are problems that we’re facing the world, but here’s what we can do. I don’t like to bring something to the forefront if it doesn’t have a solution, or just dump it on people. I try to make sure what I’m doing and saying are things people can actually do and encourages them to make change where they can.

I also think my creativity is inspired by sustainability. I just try to show people that instead of seeing the glass half-empty, it’s a glass half-full, and we could grow from here. When people try to advocate for something, a lot of the times, they don’t acknowledge that it’s not always the consumer’s fault. It’s really the industry as a whole but I understand. When people first learn about what’s happening, they're really angry and they blame the immediate person next to them. But then as people grow within their advocacy, they realize that there’s a greater thing happening that’s our main challenge instead and not each other. That’s what I’ve learned personally because I learned you can’t sustain shame, it’s not a good motivator. Hope is what sustains people and so I feel like that’s been my personal pivot.”

“I know this sounds basic but honestly, don’t focus on the followers or having to see certain growth — just share what you love and you’ll find people who love that, as well. I find the times that I get insecure about my following is when things start dipping, and I hate it. It makes me just want to delete everything. But once I started approaching it as, ‘what if I just posted what I like?’ people responded to that super well and I realized that’s what people actually want. They don’t want ‘cookie-cutter,’ they want to see your authentic self, instead, whatever that means. Even if you don’t get a community of people surrounding you at first, you’ll eventually find your people, even if that means you finally start sharing your own voice and lose people in the process. You want people who are going to support you for who you truly are.”