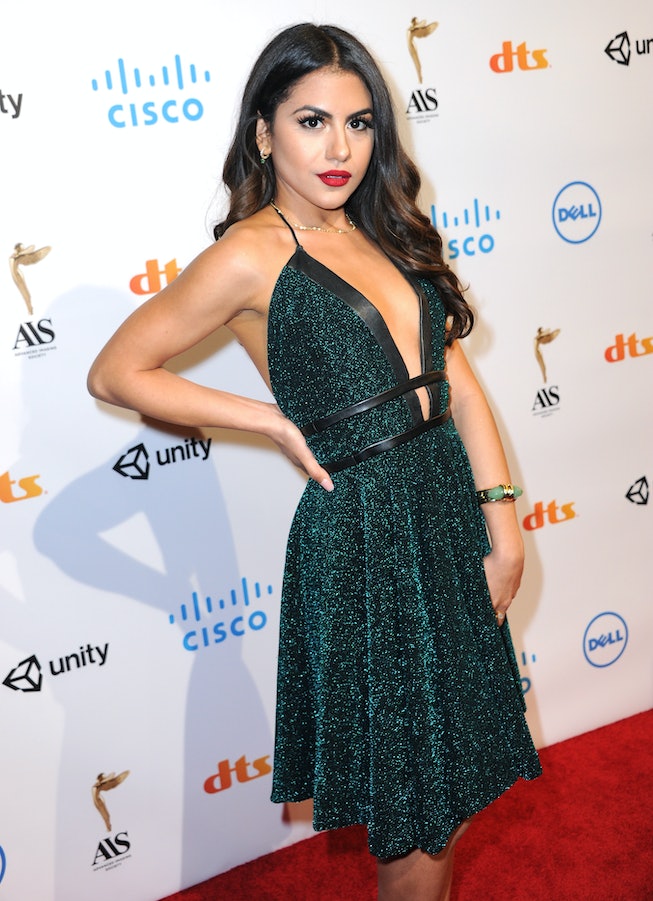 Jearnest Corchado landed a part in Sneakerheads two days before she had to be on set and almost a year after she had originally auditioned for the new Netflix show. "I think they were maybe looking for a couple of months and they never got the person," says Corchado over the phone from her hometown in Puerto Rico. "I never heard back about my [first] audition. I don't know if they saw it or not. So I did it again on a Sunday, I sent it in on Monday, and that night I got the offer."

On Sneakerheads, which follows Black-ish’s Allen Maldonado as stay-at-home dad Devin and his first (somewhat chaotic) foray into the Los Angeles sneaker culture scene, you wouldn't think twice about Corchado having to learn about her character, the sharp-witted sneaker reseller Nori, on the fly. "It was a discovery process and a lot of direction," recalls Corchado. "Nori is a product of a couple of things: the direction of Dave Meyers, the direction of the creators, and a big portion also comes from the wardrobe. Once I knew how Nori dressed and how she handled herself, it was a lot easier for me to understand her."

Corchado, 24, has been performing since she was eight years old for small roles in novelas and TV shows in Puerto Rico. At 15, she decided to pursue a career in acting and then moved to L.A. for college. In addition to studying film and television in school, she was taking acting classes on the side.

"The first month I got here, I had an agent and manager and I started booking kind of right away," recalls Corchado. Before Sneakerheads, she's starred in the CBS show Fam alongside Odessa A'zion, The Fosters, The Blacklist, and the Apple TV+ anthology Little America. "It was surreal because I had a five-year goal plan and everything that I thought was going to take a little longer, started happening fairly quickly. That was really amazing for me."

Ahead, we spoke to Corchado about sneaker culture, getting dressed as Nori, and how she's been staying inspired while in quarantine (spoiler: she’s branching out into music).

Were you familiar with sneaker culture before the show?

JC: I wasn't at all. I actually am more of a Doc Martens kind of girl. I didn't understand the sneakerhead addiction, but I did understand the love that people feel for the shoes because I feel that for my Doc Martens. I've used my Doc Martens so often that I feel they're part of me at this point. So after being in the show, I started to admire the culture and what it means because they are an art form. Every sneaker is very specific. It tells a story and that was a very beautiful discovery.

How would you describe Nori’s style? Any favorite sneakers you had to wear?

JC: She wears a lot of streetwear, a lot of baggy clothes. I really love the Nike Zoom Fly Off-White. The pink ones were one of my favorites. I also wore a pair of sneakers that were neon green. I actually want those more. I don't have them, but I love them.

What I love about Nori's style is that sometimes she can be very feminine, but other times she can be very masculine. It's just so natural for her to dress up and use her outfit as a form of expression. She also wears a lot of rings and braids and her makeup is always done and always fly. And another thing that I really loved about Nori, which I think happened by accident, was her long nails. The nails gave her that diva edge to her.

Getting dressed to film Sneakerheads must have been really fun. Were there a bunch of sneakers for wardrobe to choose from?

JC: The way that we did it was they already had the shoes picked, so we had to dress around the shoes. No show does that. It was really fun. The costume department wanted to know how I saw Nori and what things I like and what things I didn't like. And so we chose the wardrobes together. But I loved the choices that they brought, especially the first outfit that people see me in. It's very bold. It's something that I normally wouldn't have worn, but Nori just rocks it.

How does a character's outfit impact your performance?

JC: Immensely. If I'm going to be really honest, even in the audition process, if I don't know how they are dressing, I'm a little lost. It's crazy how much the outfit says to me and how much I connect to the character once I know what they wear. With Little America, for example, it was supposed to be in 2009, and the outfits were more, low-income-class outfits, so my shoes in Little America were basically non-existent. They were very rough. Knowing that she doesn't have a good pair of shoes just tells you a lot about the character and her circumstances. It's an essential part of constructing my character and having a good idea of who she is.

How would you describe your own personal style?

Where are you spending quarantine?

JC: I'm in Puerto Rico right now. My whole family is here. I have a little brother, he's seven years old, so I've been able to spend a lot of time with him. It's been really nice. I was afraid that he was going to have a difficult time getting used to this new reality of not going to school. And so I decided to come back and be there for him during this process, so he doesn't feel so alone. I get really sad knowing that a lot of kids are not able to play with other kids, especially those who don't have siblings. I can imagine how difficult it is for them.

How have you stayed inspired at home?

JC: I've been working on an album. This happened out of nowhere. I love music. I've always been writing music. About a year ago, I decided I might want to pursue this but I never had the chance. I was always working on acting projects. And this pandemic, in a way, paused everything. It stopped the whole industry. It gave me a lot of inspiration, as well. A lot of emotions that I needed to put on paper. And so I've been writing a lot of music and singing. I've been going to the studio and recording. I've been working on my album and, hopefully, people will start hearing from it soon.

In the spirit of Latinx Heritage Month, how do you try to amplify your culture in your work?

JC: It's honestly my biggest purpose. It's really important for me to do a project that I, in some way or another, give a beautiful example to Latinos and inspire them. I've been really lucky to play a Latina. I've been able to tell beautiful stories, even with Little America. Even though it was an immigrant story, and it did have that element of being an immigrant and being "illegal," I think that it allowed me to show the humanity of Latinos and to let other immigrant kids know that they can dream, too. That's my biggest purpose — to inspire other kids that are Latino that they can do what I did.

Sneakerheads is available to stream on Netlix now.