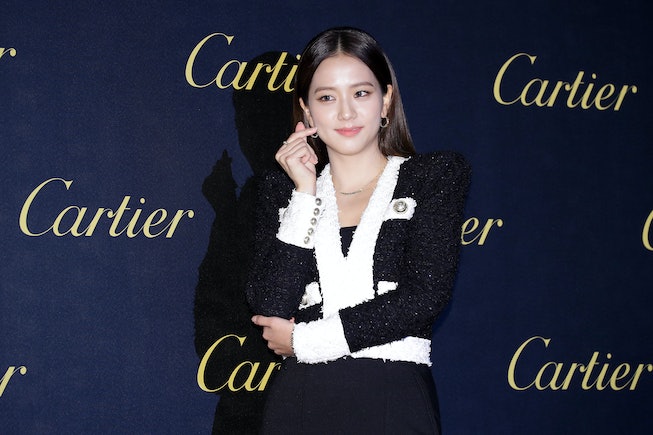 Blackpink’s Jisoo and her upcoming drama, titled Snowdrop, is set to arrive on streaming and television networks in just a few days and the K-pop star, along with major Korean actor Jung Hae-In, recently celebrated the new show’s premiere in Seoul.

On Thursday, Dec. 16, Jisoo took to Instagram and posted photos from the event, showcasing her winter princess-turned-goth red carpet look. The singer and actress wore a Dior black velvet mini dress, adorned with a tied sailor-style collar and lace trim. Jisoo, who also serves as one of the French fashion house’s brand ambassadors, paired her LBD ensemble with a pair of matching classic pumps and simple diamond earrings, also from Dior.

The broadcasting network behind Snowdrop, JTBC, uploaded a post of both Jisoo and Jung Hae-In at the show’s premiere on Instagram, as well, with the caption, “Jung Hae-in and Jisoo at the Snowdrop premiere look as if they came from the ‘visual forest.’”

Although this isn’t Jisoo’s first acting role, as she made a short cameo appearance back in 2019 in tvN’s fantasy drama called Arthdal Chronicles, the new show will be the K-pop singer’s first main character role. Snowdrop, which will be available to watch on Disney+ and Korean broadcasting network JTBC, is centered around two college students in South Korea during 1987, a year when a mass pro-democracy movement rocked the country. As the nation was forced to hold elections during this time, it follows Jung Hae-In, who will play a graduate student with a secret past, and Jisoo as a college student, eventually falling into a romantic relationship.

See Jisoo’s outfit from the Snowdrop premiere in more detail ahead of the show’s premiere on Saturday, Dec. 18, below.