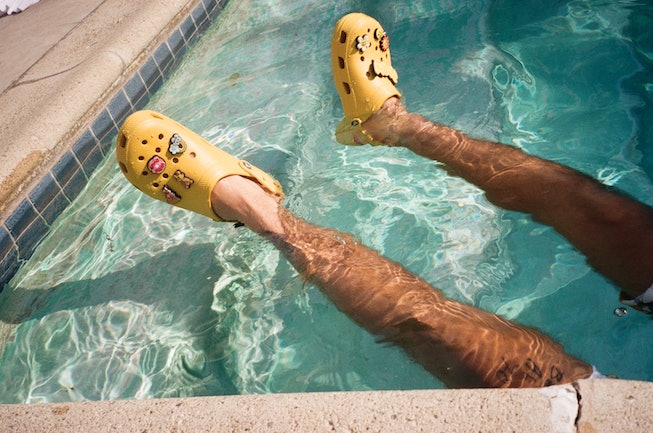 Another Crocs collaboration just landed on the internet, and it's a pretty good one. Justin Bieber's Drew House will be releasing limited-edition Crocs inspired by the skate-inspired fashion brand's signature yellow color. Plus, eight Jibbitz™ charms are included in the Classic Clogs' drop, featuring clothing line's smiley face and name logos.

"As an artist, it's important that my creations stay true to myself and my style. I wear Crocs all the time, so designing my own pair came naturally," said Bieber in an official statement. "With these Crocs, I just focused on making something cool that I want to wear." He announced the news via Instagram on Wednesday with a video of him cutting into a Crocs cake, which taps into the viral internet "Everything Is Cake" trend.

The new collaboration follows fellow Crocs enthusiast Bad Bunny's recent partnership with footwear brand. The YHLQMDLG singer's "Glow Up" clogs dropped at the end of September and sold out within 16 minutes, according to The New York Times. We can only assume that the same thing will happen with Bieber's Drew House Crocs, too.

The Crocs x Justin Bieber with Drew Classic Clog, which retail for $59.99, will be available on Tuesday, Oct. 13, on Crocs.com at 12 p.m. ET, as well as across partner e-commerce channels, select Crocs retail stores in China and South Korea, and thehouseofdrew.com.

See Bieber's collaboration with Crocs in more detail, below.

NEXT UP
Fashion
The Best Clear Bags For Concerts That Won’t Ruin Your Outfit
Fashion
Notte’s Jessica Tse Is the Designer Behind Your Favorite Beaded Jewelry
Fashion
Salehe Bembury’s Coveted Crocs Are Back Again, Here’s How To Get A Pair
Fashion
Prada’s ‘90s-Era Sneaker Gets An Artsy Makeover