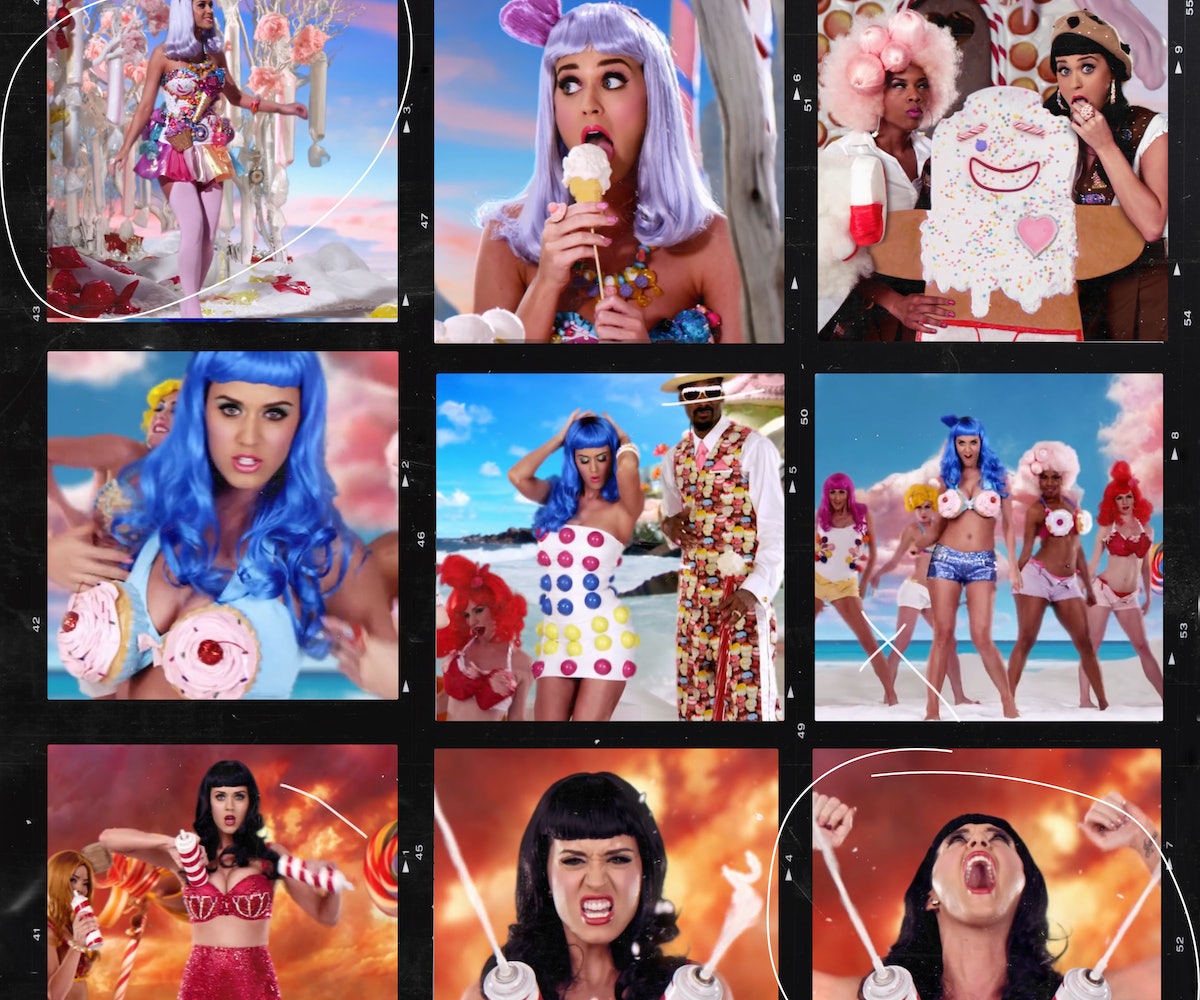 With Katy Perry's upcoming fifth album set to drop in August, the pop star is entering a new era — and an entirely different aesthetic is sure to come with it. Though, we're hoping that she stays true to her penchant for kitschy get-ups, a wardrobe choice that Perry has been pulling off for a decade. The music video for her feel-good West Coast anthem "California Gurls" — released 10 (!) years ago — is a sartorial testament to that, filled with saccharine costumes like a Candy Dots dress, a cupcake bikini top, and her infamous bedazzled bra that shoots out whip cream.

"Back then, her style was very vintage-inspired, colorful, and fun," her longtime stylist Johnny Wujek tells NYLON over the phone from Los Angeles. "She was younger and we were just silly. We're still silly, but it was sillier with the kitschy stuff."

"California Gurls" could have easily been a sunny montage of beaches and palm trees, but instead, Perry took inspiration from the board game Candyland and American painter Will Cotton, who served as the video's artistic director and who created the art for her 2010 album Teenage Dream. The video's premise takes place within the world of "Candyfornia," where Perry tries to save the Queens who are held captive by the Sugar Daddy (played by Snoop Dogg) and his army of Gummy Bears.

"We had to figure out a way to defeat the Gummy Bears and Katy was like, 'What if my bra shot out Cool Whip and killed them all?'" recalls Wujek. "I literally had no idea how to even make that. But I said, 'Yeah, we can do that. We can make that happen.' And that was just a process. I got to work with really cool special effects people to make that happen."

The video's theme served up plenty of inspiration for Wujek, who spent most of his time Googling and buying different types of candy to find ways to recreate them into clothing. The first look on Perry is a mini-dress made from a sparkling hodgepodge of sweet treats, designed by New York duo The Blonds, who produced plenty of performance and red carpet looks throughout her Teenage Dream era. "It showed up literally the day of the shoot, or the day before, and there was not enough candy on it, so my assistants and I were just gluing candy to really jazz it up," says Wujek. The dress inspired DIY versions the following Halloween, he recalls, and 10 years later that still rings true: a quick search on Etsy offers similar candy dresses, even one for a wedding or quinceañera.

Next, Perry and her dancers are dressed like Girl Scouts — an homage to the troops' business of selling cookies. Their uniforms featured sashes with badges and Perry topped her look with a beret that resembled a chocolate chip cookie. "That was literally one of my favorite pieces," says Wujek. "How has no one ever done that?" (He’s hoping Dior takes notice.)

As one of the catchiest lyrics in "California Gurls," Wujek dressed Perry in Daisy Dukes, courtesy of Diesel, which, at the time, had partnered with the singer on sponsoring her videos. "I remember we had done 'Hot N Cold' and they gave us a pair of flats that she wore. They wanted to do something again so they gave us a pair of Diesel jean shorts, and we just had our bling lady Erin [Lareau] bling them out," says Wujek. According to an old tweet from Perry, the shorts boasted close to 7,000 blue and gray Swarovski crystals, and were paired with a cupcake-style bra top made from foam by Marco Marco.

For Snoop Dogg's verse, Perry wears a white spandex tube dress adorned with spray-painted foam balls to resemble Candy Dots and a pair of platform heels covered in actual Candy Dots, which Wujek notes were "definitely gone by the end of the day." As for Snoop, the rapper's team took care of his cupcake-printed suit and frosting-covered sunglasses. "It was so cool that he did this video," says Wujek. "He was so open to it and was so fun. It worked out perfectly."

The pièce de résistance of "California Gurls" is in the video's final scenes, where Perry finally overthrows Sugar Daddy and his Gummy Bear army. Wujek is quick to point out that her red outfit — bra top, hot shorts, garters, and all — was made entirely of latex and, of course, bedazzled with crystals. As for the actual Cool Whip bra, Wujek explains that Perry wore two different versions. "One of them had magnets, so you could remove the cans, and she wore that when they did the hand-off," he says. "And then when she was shooting them, we switched to a bra that had the cans attached to a tank that was off-camera. It was a whole thing. She stood in place and they just exploded."

Perry's over-the-top costumes are among the most memorable fashion moments in pop culture history, and it's no doubt that "California Gurls" plays a big part in that. "It made such an impact and even the song itself was a hit," recalls Wujek. "That whole time was just so exciting. I feel like Katy was one-of-a-kind when it came to that much color, kitsch, and humor."