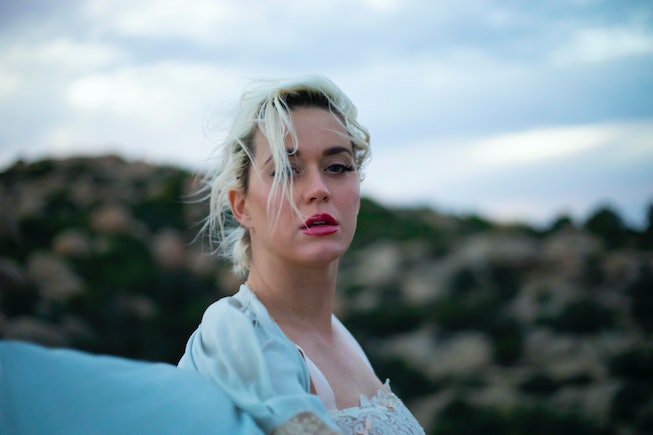 Katy Perry's long-awaited next era is finally here. On Friday the "Never Worn White" singer released "Daisies," the first single off of her upcoming and currently untitled fifth album which is expected to drop sometime later this summer. The track, a clean-sounding pop song about chasing your dreams, also came with a homemade video which features Perry in a flow-y white gown sitting in a field of daisies and going for a dip in a tranquil forested creek. At one point, she strips all the way down to show off her baby bump.

"I wrote this song a couple months ago as a call to remain true to the course you’ve set for yourself, regardless of what others may think," Perry said of the song in a tweet. "Recently, it has taken a new meaning for me, in light of what the whole world is experiencing."

For a while, after Perry shared the initial teaser for "Daisies," fans were speculating that the track would include a Taylor Swift feature. Though their evidence was scant — it was based off the fact that Swift posted a photo of her wearing a shirt with flowers on it the same day Perry announced the single — Perry nonetheless fueled speculation by cryptically responding to fan's theories with eye emojis and telling Extra TV that people will have to "tune in to [American] Idol next week if all rumors are true or false." (Of course, it turned out to be false.)

"Daisies" is the singer's second song of 2020. Her first release was "Never Worn White," an acoustic ballad that simultaneously served as her pregnancy announcement. Watch "Daisies" here.