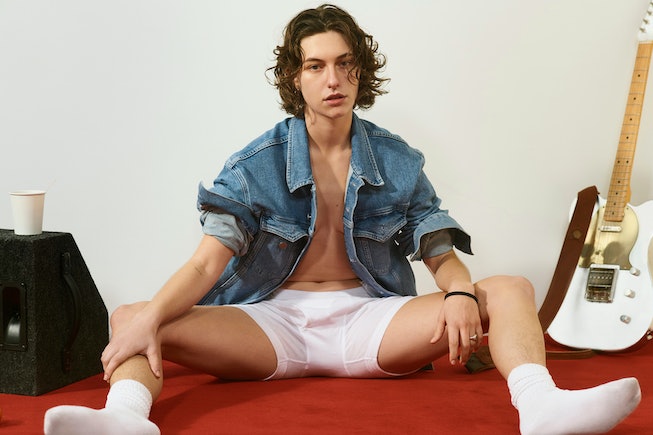 “It was cool man! Shooting an underwear campaign is hot! It’s just as hot as you’d think it is,” recalls Straus, who worked with photographer Collier Schorr and stylist Mel Ottenberg on the campaign shoot. “You’re in underwear and you’re greased up, and you’re taking photos… It’s amazing. I’m just so excited that it’s out.”

Alongside the new campaign and collection, Calvin Klein has teamed up with several non-profit organizations that advocate for LGBTQIA+ equality and safety, such as ILGA Work, Transgender Legal Defense & Education Fund, and the National Pulse Memorial & Museum (formerly onePULSE Foundation). Most recently, the brand has launched a two-year partnership with The Trevor Project to help boost the program’s crisis services (available 24/7) in addition to mental health resources for the community.

Ahead, Straus spoke with NYLON about celebrating Pride, what she’s excited for this year (hint: live performances and new music), the importance of queer art, and more.

What does the Calvin Klein Pride campaign mean to you?

Any Calvin Klein campaign, to me, means something — culturally and emotionally. It's a pillar of the fashion world. To be part of that is so incredible. It’s something I’ve wanted and thought about since I was young and I am extremely proud to be part of a campaign that honors queer people.

In-person Pride celebrations were canceled around the world last year and this year is a mix of small gatherings and virtual events. How did you celebrate Pride in 2020 and how do you plan to celebrate Pride this year?

Pride was cancelled and I was OK because I feel like I’ve gone to so many Pride celebrations, but my heart really hurt for kids for whom this month of the year is a chance to be honored and seen and party in a place that’s safe. That hurt my heart to see kids miss out on that. It made me really bummed because I know what it meant to me growing up, even in a place like New York City where I was so lucky to have an incredible, loud Pride.

I don’t know how I plan to celebrate this year! I love a good float, so, I like to watch the floats and have a nice drink. Something like that I imagine!

How have you been handling the past year both mentally and creatively, especially when in quarantine or on lockdown?

This past year for me has been a challenge to stop everything, to stop moving and sit down and think about what I could be better at. I’m also extremely lucky to be able to focus on my record and take time off touring, just stop and figure out what I like to do aside from my work.

What are you looking forward to most this year? Is there anything you can share about new music on the way?

I’m very much, very very much looking forward to playing Governors Ball in New York. That’s like my favorite festival ever, so I’m very excited to play Gov Ball. I’m also very excited to support The Strokes at The Forum in October.

And I’m really excited to finish my record! I’m really proud of this body of work and I’ve had so much time to think about it, so I’m excited to start this new chapter.

You’re also included in Primavera's lineup for 2022, what do you miss most about performing live and festival season?

I’ve heard so much about Primavera, and I’ve heard the food and catering is amazing, so I’m really excited for that. I haven’t really done that many festivals abroad, so that to me is going to be really cool. I like experiencing communal line up stuff like that, being in a backstage with all these other artists you want to see. That makes me really happy.

Festivals are also just a “get what you get” kind of scenario. You get on stage and it is what it is, and there’s something cool and magical about just handling it no matter what goes wrong.

What advice do you have for young LGBTQ+ people who are struggling with self-acceptance or the acceptance of others?

I think my biggest piece of advice is to find the art you connect to, you know? We are fortunate to live in a time where our queer art has been more accessible than ever. When I was a kid, it was everything to dive into books and historical texts about queer people and watch TV shows where you saw the same-sex make outs with the same parts — it made me feel less alone.

It was really important to me to see and visualize that because I didn’t have that direct community around me growing up, even though I’m from New York. And I was out before most people I know! So I really suggest finding some art you care about and getting down with it, because clearly as queer people, we make really special stuff.