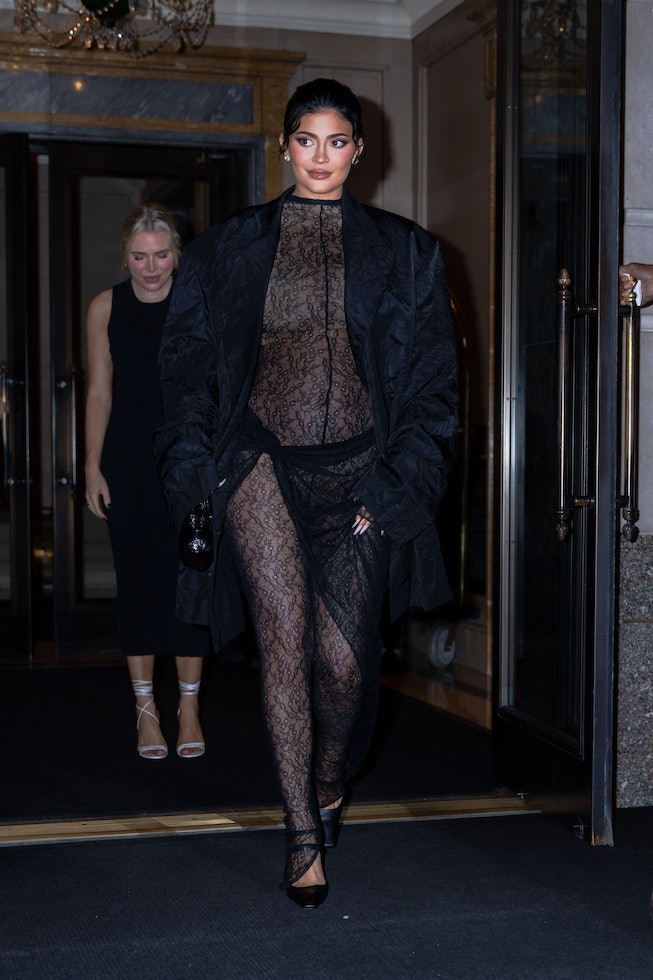 Since officially announcing the pregnancy of her second child, Kylie Jenner is already on the move and making her first public appearance at New York Fashion Week. On Thursday, Sept. 9, the beauty and fashion mogul was seen at the Empire State Building attending the LaQuan Smith’s Spring 2022 show, showing off her baby bump in a custom sheer lace catsuit designed by the brand and inspired by its latest collection. (A similar look, modeled by Barbara Palvin, was sent down the runway that same night.)

Jenner paired the head-to-toe lace ensemble with an oversized black coat and black pumps. According to People, her outfit may be an homage to one of Kim Kardashian’s past pregnancy outfits. In 2015, Jenner’s older sister wore a similar lace jumpsuit from Givenchy with a black coat and heels to the LACMA Art + Film Gala.

Rumors of Jenner’s latest pregnancy started swirling over the summer, as eagle-eyed fans started to notice changes in her social media posts and a very low-key 24th birthday celebration in early August. On Sept. 7, Jenner took to Instagram with a video that confirmed early reports, featuring clips of a pregnancy test and doctor appointments with her partner Travis Scott and their three-year-old daughter Stormi Webster.

As opposed to Jenner’s very private first pregnancy with Stormi, she’s putting her next baby bump on full display — and in style. On the same day as the LaQuan Smith show, Jenner, who was styled by Alexandra Rose and Mack, made a visit to the Revolve Gallery pop-up in an orange trench coat from Off-White’s Fall 2021 collection with a cropped patchwork tee underneath and jeans from Sami Miró Vintage. She completed the look with matching orange pumps from Off-White, a monogram twisted handbag from Louis Vuitton x Frank Gehry, and a 14-carat gemstone cross necklace from Ruby Stella Jewelry.

On Wednesday, Sept. 8, Jenner’s first night in New York called for an all-white ensemble, including a leather mini dress and pearl leather coat by Vintage Marcela, silver sunglasses from Balenciaga, white heels from Gianvito Rossi, and a white top-handle bag, also by Balenciaga.

With a weekend full of runway shows to wrap up New York Fashion Week, there could be more public appearances from Jenner very soon. Plus, with Scott’s 2021 MTV VMA nominations, she could also have the Sept. 12 awards show in her upcoming plans, along with — hopefully — a baby bump red carpet debut at the Met Gala on Monday, Sept. 13.