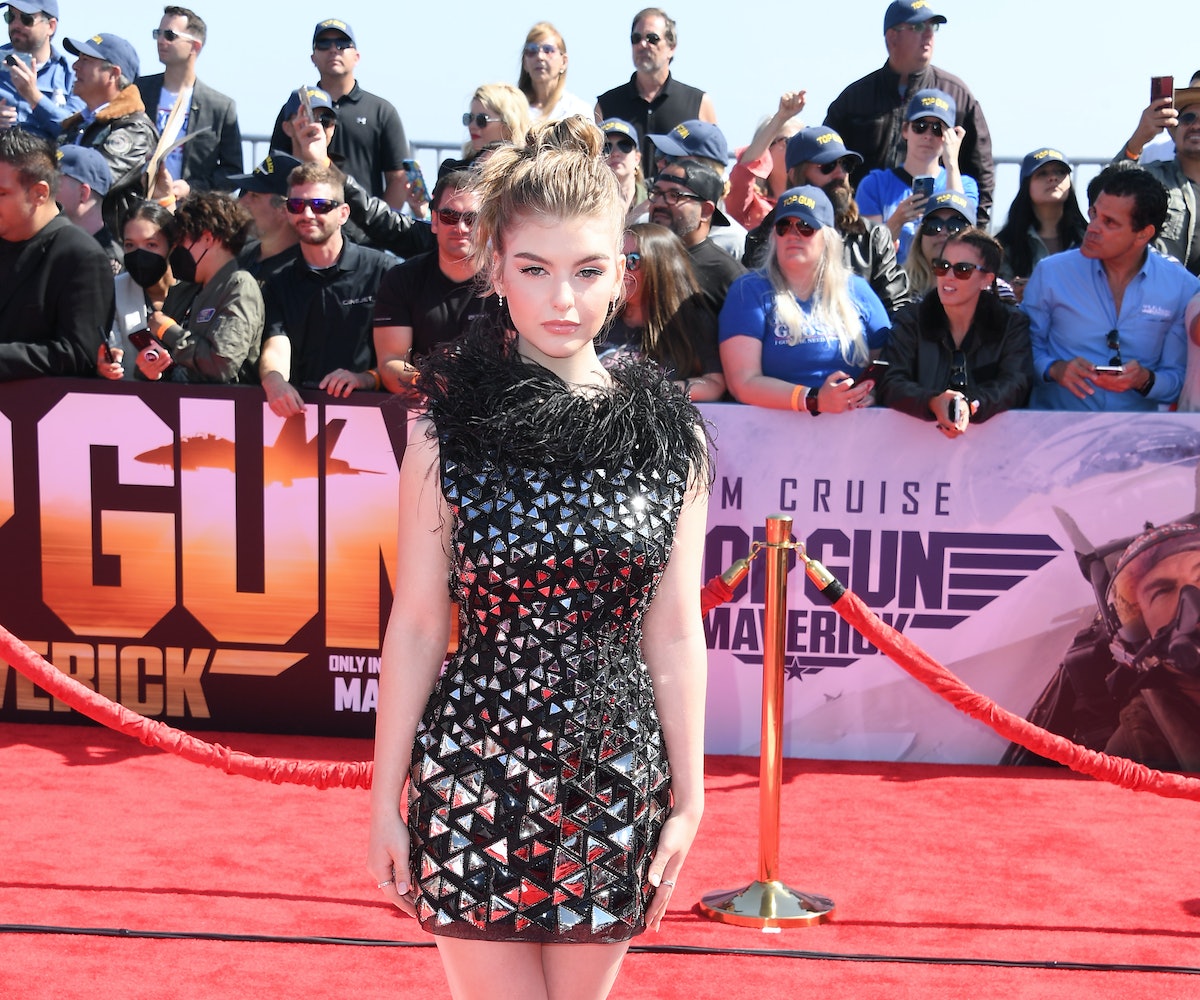 Lyliana Wray has been waiting for this moment for years. Her first-ever red carpet premiere finally happened on Wednesday, May 4, for the highly anticipated release of Top Gun: Maverick, a sequel to the beloved 1986 film starring Tom Cruise. The movie had been in the works for over a decade — filmed in 2018, and originally set to release in 2019 (then delayed to 2020, but we know how that turned out). Come 2022, Top Gun’s long-awaited arrival is officially here.

“Seeing everything come together, and getting to see the cast, was so exciting after waiting three-and-a-half years,” Wray tells NYLON. “It felt really rewarding to be a part of something so incredible and so beloved by everybody. I was just shocked every step of the way. It was a really amazing night.”

Wray was 13 years old when she filmed Top Gun for the role of Amelia Benjamin, the daughter of single mother Penny, played by Jennifer Connelly. Now, at 17, she’s well aware of how much time has passed between how she appears on the big screen versus the current version of herself on the red carpet.

“I really wanted to focus on how I’m a little more mature now, I’m older,” says Wray about her premiere look. “That was me, but this is me now, as well. I wanted to feel elegant and youthful but also mature.”

Styled by Micah Schifman, Wray’s mirrors-and-feathers mini dress from Alberta Ferretti was the perfect night-out piece for her red carpet premiere debut. “It was an amazing dress that made me feel so elegant. We actually kept calling it the ‘disco ball dress’ at first,” she recalls. “But it’s just so beautiful and I really loved how fun the feathers were.”

With Aaron Paul on makeup and Alex Henrichs on hair, Wray’s beauty look was inspired by her statement dress, with a wispy updo and a bright, bold cat eye. “I think it’s the first time that I really got to all out on makeup and actually go for it, because I’m older now,” says Wray. “So that was really exciting and a fun process to get to watch that.”

For a first-ever premiere, Wray’s experience for Top Gun was pretty epic, to say the least — “Tom [Cruise] flew in a helicopter! There were flybys! It was just all-the-way incredible.” — which makes the years-long wait well worth it. “It didn’t feel real to me until I stepped on the red carpet and even then it felt like I was in a dream,” says Wray. “I tried to soak up as much as I could and it felt like the night went by so fast.”

While getting ready for the red carpet premiere of Top Gun, Wray took NYLON behind the scenes. Read on for more.

“Aaron Paul and Alex Henrichs helping me get glam ready while listening to some of my favorite Eminem songs.”
“This Alberta Ferretti dress... I love her.”
“Thank you, Pandora, for sending the sparkles.”
“These gorgeous Stuart Weitzman heels and Louboutin clutch (which conveniently held my phone all night).”
“The final look! Definitely did not wake up like this!”Photos Courtesy of Lyliana Wray
NEXT UP
Culture
Caroline Polachek In KNWLS & More Party Photos You Missed
Fashion
The Best Celebrity Fit Pics From Paris Men’s Fashion Week
Culture
On The List (With Melissa Rich): How To Throw The Ultimate Apartment Party
Fashion
Apple Martin Is A Chanel Girl Now
Style + Culture, delivered straight to your inbox.