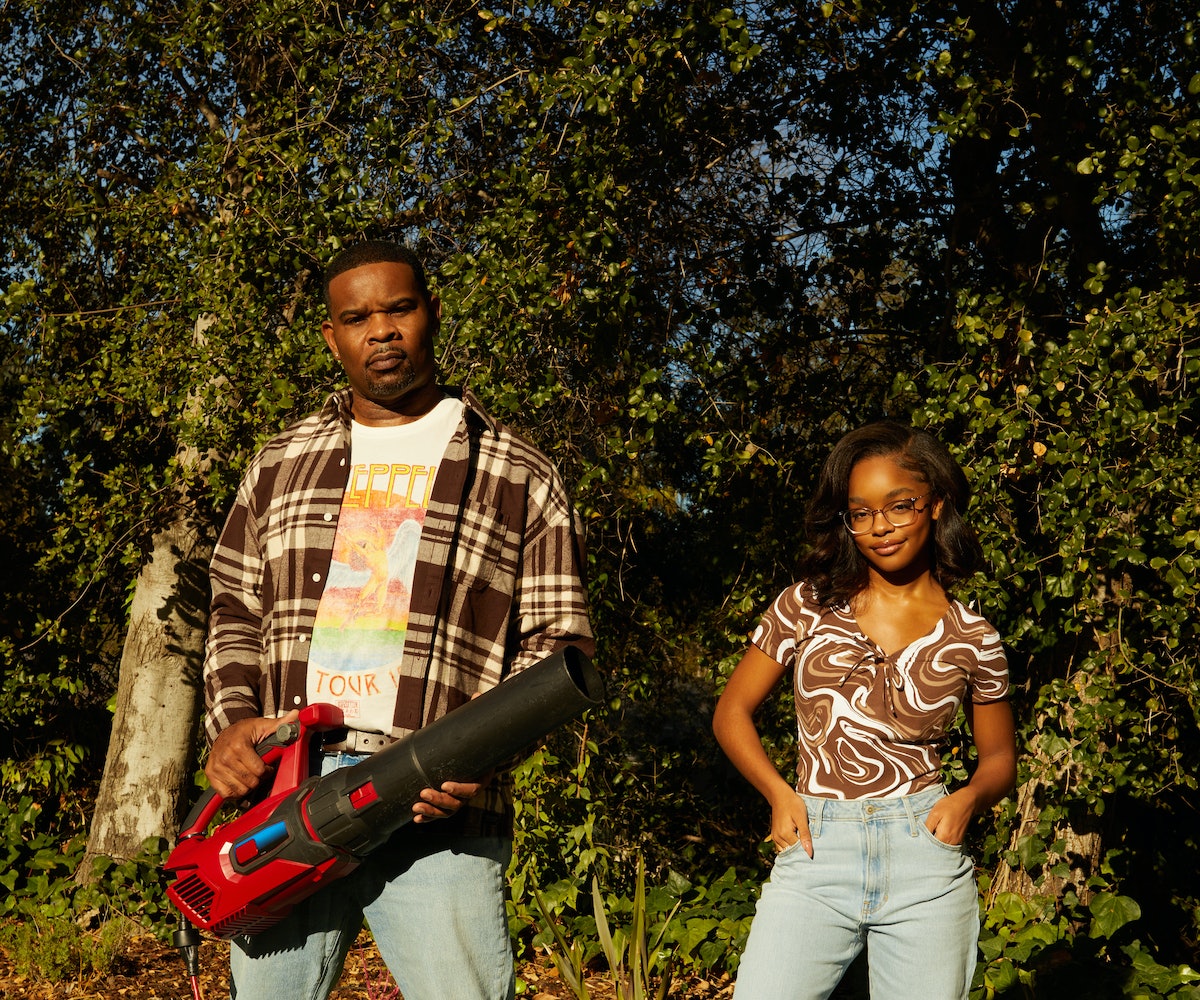 Although Marsai Martin is currently hinting at a brand new business venture on Instagram, she has another gig to celebrate: Her first-ever campaign with Hollister. The Black-ish actress and producer stars in the brand’s latest “Respect The Jeans” campaign, highlighting some of Gen Z’s favorite styles from the brand, including an assortment of must-have dad jeans. Plus, she’s joined by her own dad, Joshua Martin, for the campaign.

“We did a lot of TikToks with me and my dad, which was pretty fun, and we messed around with props around the house,” Martin told NYLON after the shoot. “I had to teach my dad how to use TikTok because I was like, ‘No, you can't do it like that. It has to be natural,’ but it was still very fun.” One TikTok video for the campaign features the 17-year-old next to her dad “doing dad stuff in her dad jeans,” like switching out the light bulb in her home and fixing the car engine.

Ahead, Marsai Martin exclusively spoke with NYLON about her first Hollister campaign, working alongside her father, what’s next for her, and more.

What was it like starring in the campaign with your father?

It’s been cool. Honestly, my dad and I have always worked together from a film industry standpoint and being behind the scenes with each other. So this was the first time it’s been just me and him in front of the camera, which was pretty cool. When we first got the opportunity to do something like this, my dad was ready to get to the gym and look his very best.

That’s so great to hear! Sometimes it can be kind of awkward or embarrassing to work with your parents, but it seems like it was very fun for you both.

Yeah, and luckily with my parents, they’re not like “parents parents,” if that makes sense, and I never get embarrassed by them. It was really cool to see him in his element because whether he admits it or not, my dad knows he loved the camera, and even styling the dad jeans with him was cool because I got to twin with him.

Do you have any favorite pair of jeans from Hollister that you’ve been loving so far? How would you style it?

So right now, I’m wearing some jeans from Hollister that are patchwork, where it kind of gives you like a checkerboard-type of vibe. Shirt-wise, I’m wearing a blue long sleeve shirt that is a little stretchy but it’s still super comfortable, and then I have on some regular white tennis shoes, so that’s an example of how I would dress on an everyday basis.

How would you describe your personal style, especially as of lately? Are there any particular styles you want to experiment with this year?

I’ve always been an oversized person. I love oversized stuff when it comes to flannels or even jeans. I would say my overall style just depends on my mood but recently, I’ve been loving oversized ‘fits. I don’t know why but I think since I’m working out again, I’m always a little bit sore. I don’t usually want to show off anything and I just want to be comfortable, and I think I’ll probably stick with that until the end of December 2022.

Do you have any upcoming projects in the works that you can share?

With this year in general, we are filming a movie in Atlanta called Fantasy Football with Paramount+, Nickelodeon, and Awesomeness Films. I’m very excited about it and we start filming sometime in April. There’s another film coming soon called StepMonster, which is with Universal Pictures and Genius Productions and that's going to be cool, as well. We’re putting up casting for that right now. And then I have a series called Saturdays, which I’m producing for Disney Channel that will be filming in Chicago in May. For the rest, y’all are just going to have to stay tuned.

But other than that, I have something new coming out and I can try not to spoil it, but it’s going to be coming sooner than you think. It’s something that I love dearly, and something that I've been working on for so long, so I hope other people love it as well. [Editor’s Note: According to her Instagram, she’ll be launching a new brand, called Mari by Marsai, in February.)